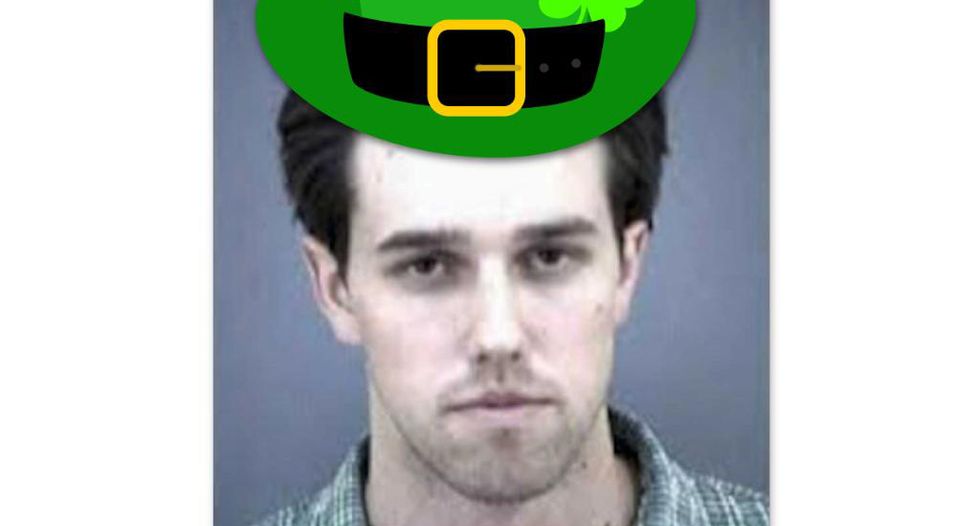 While far from the worst thing Republicans have ever done. the GOP opted to "celebrate" St. Patrick's Day with an attack on Beto O'Rourke, using a mugshot of the presidential contender, topped with a clip art Irish top hat, and a letter board in front of him that reads, "Please Drink Responsibly."

One of the most common and frustrating stereotypes for Irish people is the assumption that the Irish are all rowdy drunkards: while Ireland does have a cultural history surrounding the consumption of alcohol, many of the stereotypes are borne out of racism against the Irish.

Fueling these stereotypes by the GOP may feel like a slap in the face, even as the White House attempts to portray our bonds with Ireland: President Trump and Vice president Pence, for example, just hosted the Prime Minister of Ireland.

The image of O'Rourke used by the GOP was a mugshot from a DWI arrest over 20 years ago. The arrest had been dismissed, but the mugshot lives on, appearing initially during O'Rourke's run against Texas Senator Ted Cruz.

The use of Beto O'Rourke's full name echoes the use of Barack Obama's full name during the latter’s campaign and presidency, as an attempt to use the former president's middle name, Hussein, to link him to the former Iraqi leader of the same name.

Ted Cruz had attempted to smear O'Rourke over his use of "Beto" as a way of delegitimizing his Senatorial run, trying to paint his nickname as an attempt to pander to Hispanics. The move was seen as largely disingenuous, given that Cruz uses "Ted Cruz" rather than his own given name. "Rafael Edward Cruz."

It is also in contract to attempts to paint Representative Alexandria Ocasio-Cortez not being a minority by using a high school nickname of hers, "Sandy."

The GOP will undoubtedly portray their tweet as simply a joke, and claim those who were offended are simply too think skinned to appreciate their brand of humor.