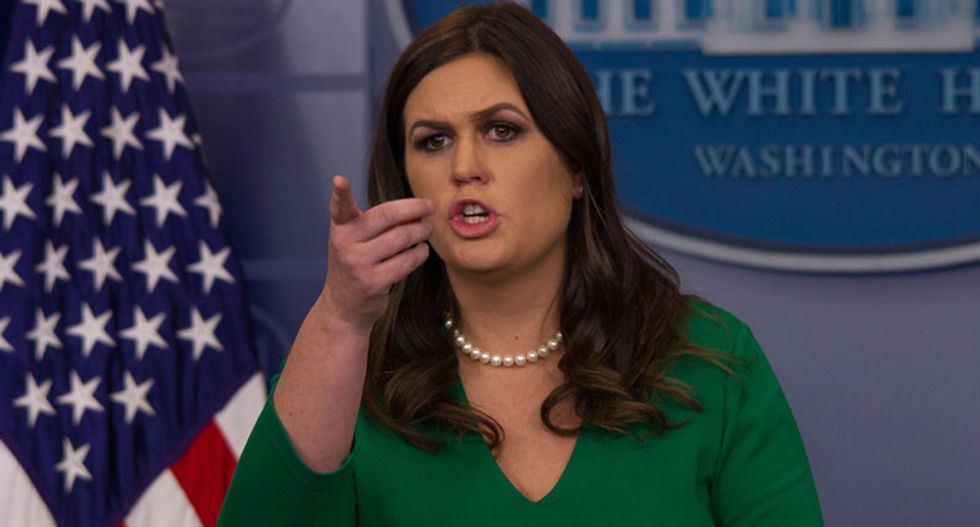 White House press secretary Sarah Huckabee Sanders has hosted just one press briefing in the past 81 days, obliterating all records for media non-compliance. This accelerated strategy to choke off press briefings is part of a historic, incremental effort by the Trump administration to lock out the press—and, by extension, the public—from the government’s official duties and business.

And it's working. The press briefings have been effectively buried, which raises an interesting question: If Sanders won't do her job of briefing the press, why is she still pulling down a six-figure salary paid for by taxpayers?

Sanders was promoted from a deputy to White House press secretary in 2017 and pocketed a $14,000 raise in the process. She now earns $179,000 a year, which ranks among the highest salaries that White House advisers are allowed to make.

Sanders' no-show routine at the press briefings has become so absurd that White House reporters now dash out onto the grounds when they find out she's giving a live interview to Fox News on the White House lawn. That's one of the few ways they are able to ask Sanders questions on-camera: When she's done with her Fox News interviews, reporters pepper her with questions on her way back into the White House.

And even when she was hosting semi-regular briefings, Sanders was part of a team that did as little as possible to help reporters. "When [Sean] Spicer and Sanders do take questions from journalists, they increasingly offer nonanswers,” the Washington Postreported … in 2017. The nonanswers remain a trademark. It's just that the briefings themselves have effectively vanished.

That's in part because Trump clearly functions as his own press secretary. He now routinely takes more questions from the press—during White House "pool sprays" or while walking to the helicopter on the South Lawn—than does Sanders. Trump fancies himself as a top-rate media communicator and obviously thinks he should handle the duties of addressing the media.

He's also specifically signaled that he doesn't want his press secretary answering questions from the press. "The reason Sarah Sanders does not go to the ‘podium’ much anymore is that the press covers her so rudely & inaccurately, in particular certain members of the press," he tweeted in January. "I told her not to bother, the word gets out anyway! Most will never cover us fairly & hence, the term, Fake News!”

That leaves Sanders to do what, exactly, in a White House that has pulled the plug on daily press briefings?

Some observers might suggest that Sanders' duties extend well beyond the briefings, and that maybe she's extremely active behind the scenes as a top communications adviser to Trump. To that I'd say: Gimme a break. As has been documented over and over, Trump has no real, functioning senior advisers because Trump doesn't listen to anybody else in the White House. You think Sanders is really drafting detailed communications strategy papers that Trump closely studies and then implements?

Even some White House insiders now view Sanders' communication shop as being "irrelevant." Her team has shrunk dramatically as scores of assistants and deputies have left the White House and their jobs have not been filled, in part because there's not much for communication staffers to do. In previous administrations, those support staffers helped the press secretary prepare for his or her daily briefings—briefings that have been effectively eliminated under Trump. "Because only a few staffers remain, there is a lack of manpower for creating a broad messaging strategy," CNN recently reported.

Note that when Sanders held a briefing back on Dec. 18, 2018, she signaled to reporters that the White House would accept a bipartisan continuing resolution to keep the government open as the administration sought other ways to pay for a border wall. Yet the very next day, Trump announced he wouldn't accept the funding deal, which made Sanders look like she was completely out of the West Wing information loop.

At this point, the fact that the briefings no longer really exist doesn't matter much, since they have been completely useless for a very long time. A bastion of lies, misinformation, and nonresponses, the press events do almost the exact opposite of what the briefings were designed to do: inform journalists about the day’s events at the White House.

Note that the scattered briefings that do remain have also become comically brief, often concluded in less than 20 minutes. Previous administrations not only hosted near-daily briefings, but the briefings often stretched on for more than an hour, as the press secretary patiently tried to answer every question in the room.

Back in June 2017, I asked if the Trump White House press briefings could be saved. They clearly cannot, and Sanders has helped bury them. Now her job is irrelevant, and she ought to vacate her post.