Shameful: These Missouri cops harass a dying cancer patient as they search a hospital room for weed 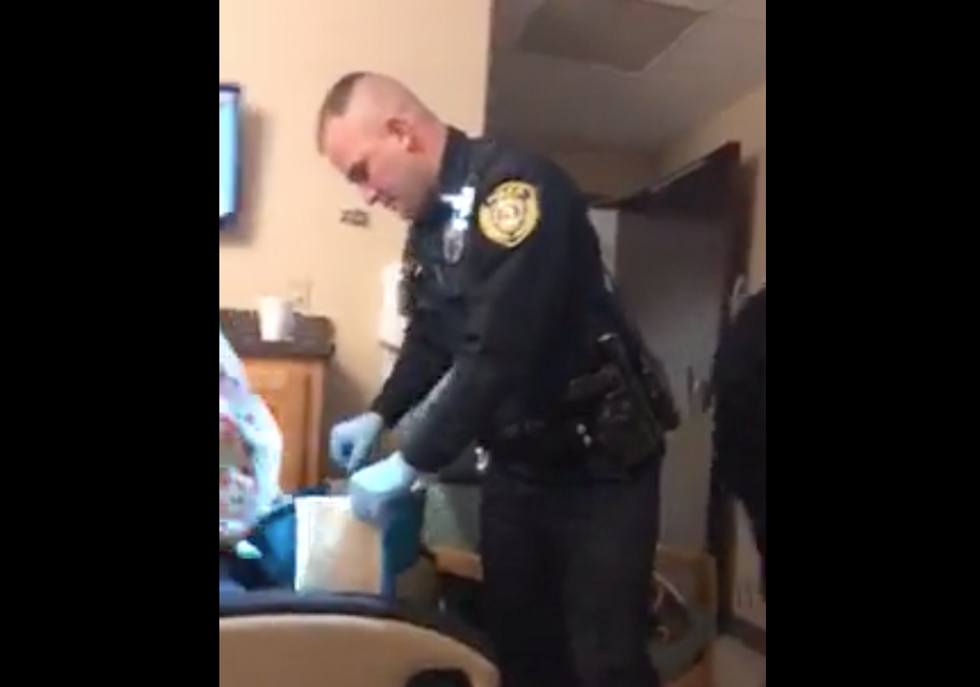 Although voters in Missouri approved medical marijuana last year, the new law is not yet in effect. And that created a real problem for hospitalized cancer patient Nolan Sousley, as a live Facebook video that has gone viral achingly demonstrates.

Sousley has been diagnosed with Stage 4 pancreatic cancer that has metastasized to his liver and was hospitalized at Citizens’ Memorial Hospital in the town of Bolivar, in western Missouri, when he admittedly consumed a capsule of THC cannabis oil in the parking lot to ease his pain.

An overzealous hospital security guard apparently reported him to the local police, with police saying he told them he had smelled marijuana smoke in Sousley’s hospital room. To be clear, cannabis oil capsules have no odor.

That report—baseless as it was—was enough to send a pair of cops running to the hospital and up to Sousley’s hospital room. With consent to search provided by the hospital, and over Sousley’s protests, the officers then searched his room, bags belonging to his girlfriend, and his own medicine bag.

“I’m not letting them dig through it. It has my final-day things in there, and nobody’s going to dig in it,” Sousley told his doctor, his voice cracking. But he later relented, and one of the officers searched the bag without discovering any of the demon weed.

Sousley said in a subsequent video that he ultimately let one of the officers go through the bag and that no marijuana was discovered. In fact, the cops found nothing at all and left empty-handed.

Still, a terminal cancer patient whose only offense was being slightly ahead of state law about medical marijuana was needlessly subjected to the trauma of a police search of his hospital room and his personal belongings as he lay in his hospital bed. Common sense and decency would have dictated otherwise.

The unnamed security guard who called in a fictitious report of marijuana smoke in the hospital room certainly deserves some blame. But so does the hospital itself for providing consent for police to search the room of one of its terminal patients. And so do the police officers involved. They could have used their discretion (otherwise known as common sense) to peek in the door, suss out the situation, sniff the air, declare that they smelled no marijuana, and leave. But they didn’t do that.

The hospital at least apologized for its actions. In a statement released after the incident began drawing national outrage, hospital spokeswoman Tamera Heitz-Peek said that “respect is part of our core values” and that “our actions in this recent event did not reflect who we are as an organization.”

Heitz-Peek then continued: “We pride ourselves in providing compassionate care to all patients and we fell short of expectations. We apologize to our patient and his family and friends who were affected by our actions. We are reviewing the incident and will retrain our employees in the core values and the importance of respect and dignity to our patients and the community.”

The cops, however, had no apologies. Police Chief Mark Webb told the Bolivar Herald-Free Press only that officers responded to a call about possible marijuana in a patient’s room, that his officers had obtained consent to search the room, and that “nothing was found.” He did complain, though, about negative comments piling up on the department’s social media accounts.

Sousley, for his part, is taking the high road. He told the Herald-Free Press he didn’t blame the police and he hoped some good would come of the incident.

But he couldn’t help being somewhat jazzed by the viral response. In a Facebook post from last Thursday, he rallied the troops: “This is what I’ve worked for. It finally got here. Here we go fellow fighters. We goin viral. I’m gettin calls from weed companies, attorneys I am crying I’m so happy. I can quit workin so hard now,” he wrote. “I told you I was gonna do this and I did. I want the world to see how we treat our own people. Forget immigration we have criminals laying in the hospital I guess. I am so happy. Look what we’ve done. All of us together. Thank you all so much for caring and believing. Let it go. Let it grow.”