Nikki Haley is not very smart 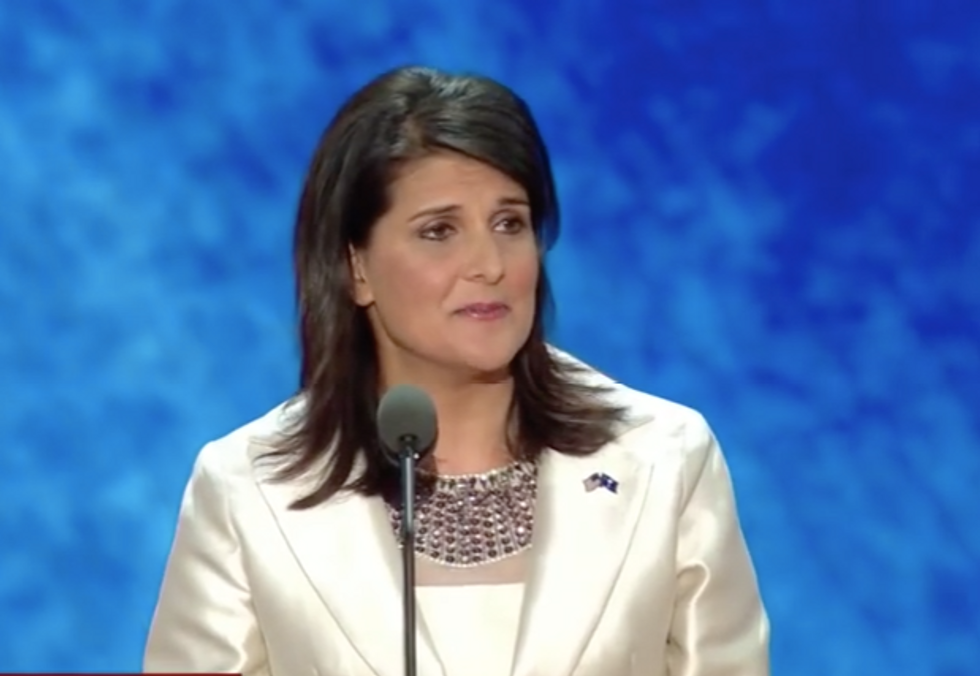 Nikki Haley is often touted by pundits as being one of the more intelligent GOP politicians and is considered a rising star.

But as with other supposedly wonky GOPers, Haley is only considered smart when you compare her to the rest of the party, which isn’t saying a whole lot.

For example, today she responded to a tweet by Bernie Sanders in which he wrote that “In the United States it costs, on average, $12,000 to have a baby. In Finland it costs $60.”

Alright @BernieSanders, you’re not the woman having the baby so I wouldn’t be out there talking about skimping on a… https://t.co/RZbLBcuMbZ
— Nikki Haley (@Nikki Haley)1553114215.0

What most people would see as Finland giving Finnish mothers a good deal on maternal care and the US ripping off American mothers, Haley sees as “skimping” Finnish women. According to Haley’s logic, if drug giant Pfizer charges you $1,000 per pill while a generic drug manufacturer charges you $5 per pill, you should be angry at the generic drug manufacturer for “skimping” you.

Also, if Haley had any good sense she’d stay clear of any comparison between maternal care in Finland and in the US because, well, the US doesn’t compare very favorably:

Finland is the best country to be a mother, according to Save the Children’s 15th annual ranking released Monday, while Somalia comes in last. The United States hovers at 31 — about the same as last year — but is seeing an increase in maternal deaths, according to this study and others.

You’d think this would be where Haley deletes her tweet to spare herself from well-deserved ridicule, or at least slinks away from her phone or keyboard in shame. But being an insular and dimwitted Republican (but I repeat myself), Haley doubles down with a follow-up tweet:

Health care costs are too high that is true but comparing us to Finland is ridiculous. Ask them how their health care is. You wonÃ¢Â�Â�t like their answer.

This is what happens when you live in a hermetically-sealed bubble where you’re fed a constant diet of Fox News, My Pillow commercials, and “the US is the greatest country on the planet”. So powerful is this bubble that even Haley, a former UN Ambassador whose exposure to people from other countries should have disabused her of such provincial notions, is seemingly oblivious to facts known the world over.

I mean, a quick Google search would’ve shown Haley that:

The quality and equality of health care services in Finland were rated among the best in the world. Finland, Iceland, Norway, the Netherlands, Luxembourg, Switzerland and Australia were at the top of the list.

Statistically, the health care in the top seven countries were roughly equal to each other in terms of overall quality.

Compared to those nations, Finland's public health services also improved the most over the past few years, according to the report.

In recent years the study, financed by the Bill and Melinda Gates Foundation, has also examined how countries finance their health care system and whether those services were available to everyone.

The top three countries with the best quality and most egalitarian health services were found to be Finland, Switzerland and Iceland.

Not to mention, last year the UN rated Finland and the happiest country in the world.

In any case, what this hammers home for us once again is that, contrary to what many establishment Republicans and centrist pundits would have us believe, Trump is not an anomaly but is rather the manifestation of a culture of profound, proud ignorance on the part of a fairly significant portion of the country.

If that portion of the country would just wallow in their ignorance without involving the rest of us, I wouldn’t be so hot and bothered. But that ignorance is keeping us from making improvements to our health care system, and that has very real life and death implications for many Americans. I won’t get much into why such ignorance persists other than to say that you all should read a book called “Dying of Whiteness” by sociologist and psychiatrist Jonathan Metzl. You can read more about it here, but here’s a little taste:

Did you find that racial resentment was the primary reason so many people supported policies that are so obviously bad for them? And if not, what the hell is going on here?

I want to be very clear. I found a vast diversity of opinions. And I don’t, in any way, claim to know what’s in people’s hearts or in their minds. I certainly found many people who told me they support these policies because, as one person said, “It might hurt us but at least our tax dollars aren’t going to Mexicans and welfare queens.”

Why Bernie Sanders took a stand against a Biden nominee