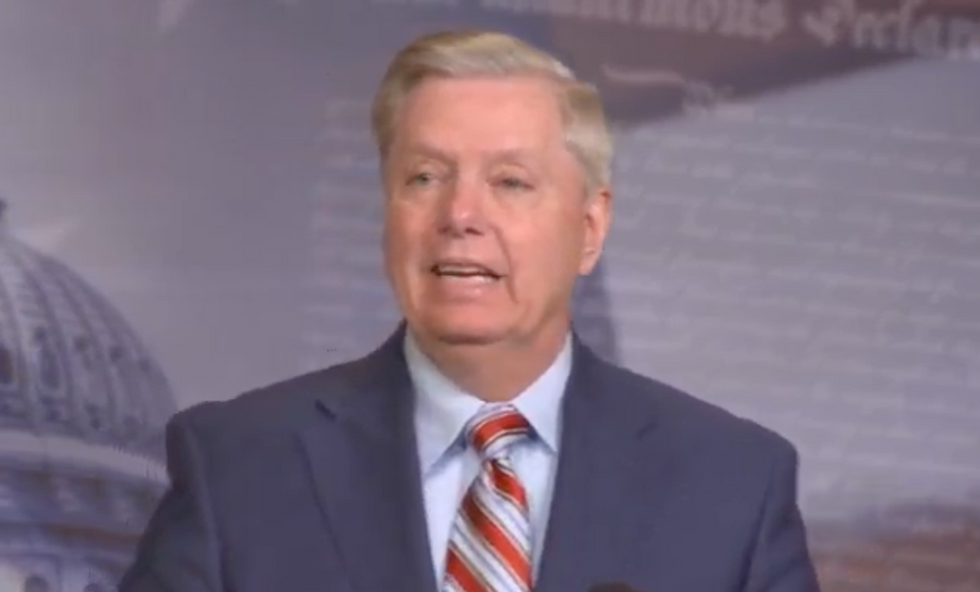 Even as Republicans are railing against the supposedly "partisan" nature of the Russia investigation and the dangers of extended political investigations, they still can't let go of their most absurd bugbear: Hillary Clinton's emails.

Nearly three years after the end of the investigation was announced — an investigation that, arguably, cost her the presidency even while finding no basis for criminal charges — Sen. Lindsey Graham (R-SC) delivered a bizarre press conference in which he demanded answers about the investigation.

Answers that, for what it's worth, we already have. And even if we didn't have them, it's absolutely mystifying why it would matter now. Even if you assume Hillary Clinton got away with a crime, it's hardly the most important of crimes for Congress to spend many more years investigating her. Especially when Trump and his family's reported use of unsecured phones, emails, and messaging apps demands attention — and is an ongoing vulnerability in the administration, rather than a past grievance. Graham also called for another special counsel to be appointed to investigate the FBI's actions during the 2016 election.

Graham correctly noted, for instance, that Comey's decision to announce his conclusions in the email investigation was unorthodox, and likely damaged her campaign.

"That did affect this election, and if the shoe were on the other foot, Republicans would have been pretty mad about that," he noted, accurately.

But then he posed questions we already know: Why did Comey make this announcement? Well, Comey explained it in his book. Former Deputy FBI Director Andrew McCabe explained it, too, in his book. Perhaps most importantly, the Justice Department inspector general thoroughly reviewed the conduct in the case.

“Was it just a tarmac meeting, or was it more?" Graham said, referring to a meeting between Bill Clinton and former Attorney General Loretta Lynch. "I believe there was more there.”

Of course, he ignores the fact that Trump's behavior on countless occasions — including firing the FBI director and the attorney general on two separate occasions because he didn't like how the Russia investigation was being handled — is much worse and more damning than the Clinton-Lynch meeting ever was.

And, it bears repeating: Who cares? The case for aggressive investigation of Trump is clear: He's the president, and his conduct deserves scrutiny. Clinton's conduct, too, deserves scrutiny — but it's received that extensively. Of all the matters Congress could care about, why still beat this drum after all the time that has already been spent on it?

Well, the reasons seem to be two-fold. First, the GOP has a deep, visceral, misogynistic and unabating loathing for Hillary Clinton, one that can't be quelled by reason or restraint. They have no capacity for seeing her or cases revolving around her impartially. There's also clearly an element of revenge — going after Clinton is cathartic for those who think Trump was unfairly treated.

And second, as ever, Republicans want a distraction from Trump and his scandals. There's still much more to learn about Mueller's final conclusions, but even aside from that case, the president is awash in legal, political, and moral controversies — and he has, indeed, already been implicated by prosecutors in a campaign finance crime. Anything to draw attention to another shiny object is seen to benefit the GOP.