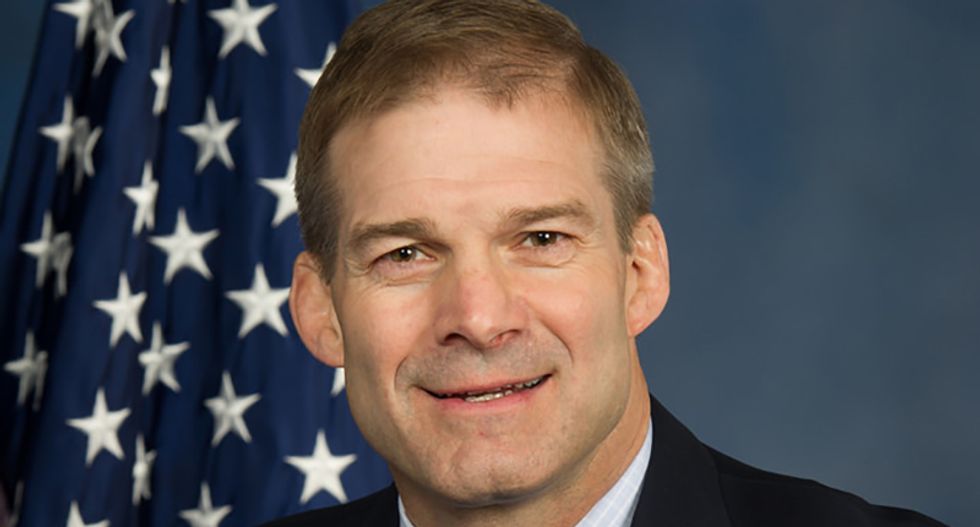 Still not content after a bizarre performance as chief Republican naysayer in Trump fixer Michael Cohen's public testimony to the House Oversight Committee this week, Jordan took himself to Meet the Press today to further dismiss the federal investigation into Russian election hacking and its links to the Donald Trump presidential campaign. How committed is Jordan to that cause? Committed enough that the man has not allowed even a scintilla of news, in these last two years, to enter his innocent head.

He's not even willing to agree that the Putin government's espionage efforts towards throwing the U.S. elections were done to advantage Donald Trump.

[CHUCK TODD] Do you believe [they were trying to impact the election?][JIM JORDAN] Yeah, of course that's what the intelligence community told us. But there is zero evidence—

[TODD] Do you believe they did it to try to help Donald Trump win?

[JORDAN] Who knows why they did it. But there is zero evidence—

[TODD] Do you believe it's possible that Russians for their own foreign policy reasons wanted Trump not Clinton?

[JORDAN] I don't know. They can, they can do whatever they're trying to do, who knows what their motives were, what I know is there is not one bit of evidence to show there was any type of coordination, collusion, conspiracy whatsoever between the campaign and Russia to impact the election. But there is all kind of evidence that the Clinton campaign worked with Russians to impact the election via that whole thing I just described where they [...]

The U.S. intelligence community reached the conclusion that the Russian efforts sought to benefit Donald Trump and undermine Hillary Clinton over two years ago; for Jim Jordan to still be unclear on that particular detail is an impressive effort at self-imposed blindness even for the former wrestling coach.

Similarly, there is quite a bit of evidence of "coordination, collusion, conspiracy"—the very point of the Robert Mueller-led investigation—in the various court filings already presented in the case. Trump campaign manager Paul Manafort, currently mouldering in a jail cell, is now known to have handed off 75 pages of detailed Trump polling data to a man with ties to Russian intelligence. Trump confidante Roger Stone is now known to have had contacts with those that leaked the Russia-gathered hacked Democratic materials, and possibly foreknowledge of the publication of those materials. Trump offspring Donald Trump Jr. is now known to have organized a Trump Tower meeting between campaign officials and a cut-out for the Russian government in which the Russians offered information about Clinton and pressed the Trump campaign for the relaxation of sanctions against Russia, if Trump won the presidency. Donald Trump himself was instrumental in crafting a misleading statement attempting to obscure the importance of that meeting, and did so on his way back from a private one-on-one meeting with Putin in Helsinki.

Jordan went on to repeat, yet again, the hoariest and most addled of Team Trump takes, attempting to claim that the Clinton campaign "worked with Russians" because Christopher Steele, the former British spy who probed the Trump family's curious ties to Russian figures, talked to Russians as part of his probe. (By this logic, the FBI is conspiring with drug dealers, your local police department is conspiring with drunk drivers, and Jim Jordan has conspired with serial sexual predators.)

This is a man who is very, very, very committed to not understanding even the rough outlines of the Russia hacking investigation. He is so committed that he has not updated his rote bullet-point condemnations of the probe in over two years; he is doing his level best to pretend at being a just-awakened coma patient.

Why? What does Rep. Jim Jordan, like Reps. Devin Nunes, Mark Meadows and others, gain from public protestations of Donald Trump's innocence—or from the pretense of Paul Manafort or Rick Gates or Roger Stone's innocence? Why is this man so determined to stake his entire reputation and career on denying even the idea that the Russian government's actions were carried out to boost Trump?