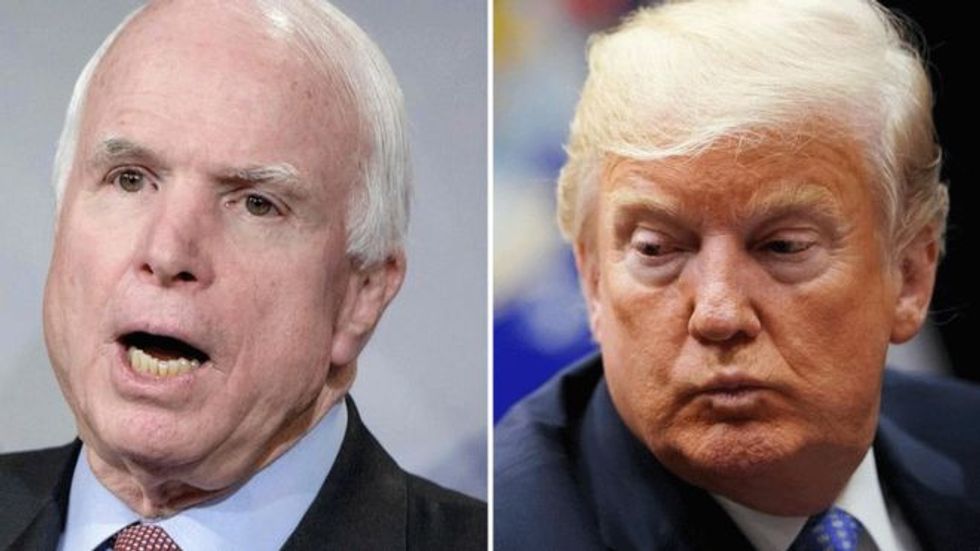 On Wednesday, President Donald Trump drew both ridicule and disgust for his bizarre attack on former Sen. John McCain (R-AZ), a Vietnam War hero and statesman who passed away from brain cancer last year, during a speech on the economy at a factory producing tanks in Lima, Ohio.

"I gave him the kind of funeral that he wanted, which as president I had to approve," Trump told the crowd. "I don't care about this, I didn't get 'thank you,' but that's okay. We sent him on the way. But I wasn't a fan of John McCain."

Many commentators remarked how ridiculous it was for Trump to demand that a dead man thank him:

Does the President understand what a funeral is? Does he know that people who are dead are incapable of speech? https://t.co/3FR5CuEcMp
— David Cicilline (@David Cicilline) 1553116188

But it turns out that Trump's comment might have been even stupider than it sounded — because his role in "approving" McCain's funeral arrangements at the Capitol was virtually nil. All he did was approve military transportation of the casket.

In fairness, however, Trump did at least honor McCain's biggest final request to him: to not go to his funeral. Eulogies were instead given by former presidents George W. Bush and Barack Obama, who respectively defeated him for the presidency in 2000 and 2008, but with whom he had far more civil relationships.

Trump has been trashing McCain for years, even suggesting he wasn't really a war hero because "I like people who weren't captured." McCain, in turn, blasted Trump as unfit for office in 2016, and while he voted with Trump most of the time, he cast the deciding vote against the president's crusade to repeal the Affordable Care Act.