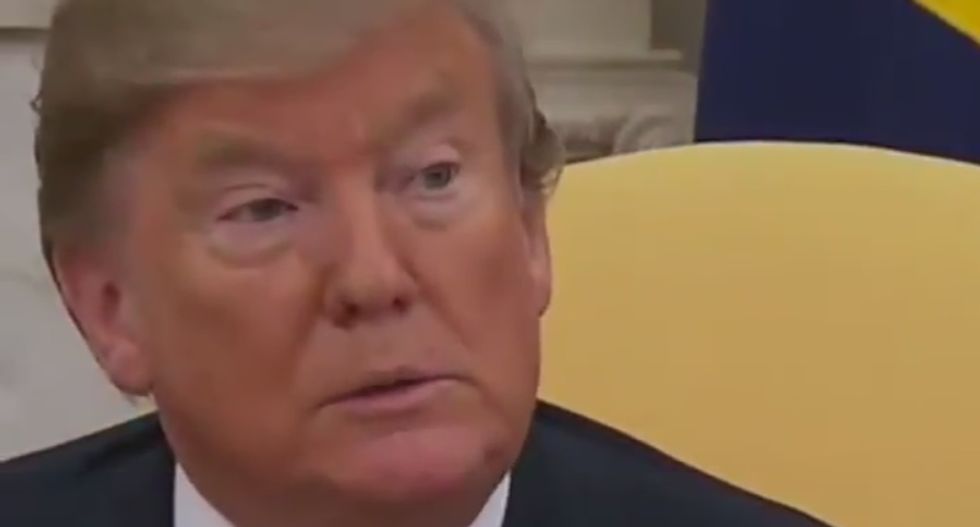 Over the weekend, Donald Trump engaged in a series of Twitter blasts that were extreme enough that even a nation almost inured to his rages sat up and noticed. But even in that whirlwind of awful, one thing stood out as the primary target of his ire. Between threatening to retaliate for an SNL re-run, scheming to take a factory from an American company, making fun of allies, and kicking a dead man, Trump still found time to direct the majority of his attack at Robert Mueller and the investigation into Russia. Court documents unsealed this week may show that Trump’s apparent rage is really a sign that he’s feeling very, very trapped. Because those documents reveal that Mueller may be much more of a threat than he seemed to be a few weeks ago.

Within the last few months, the narrative around the special counsel has seemed clear. Reporters discussing the sentencing of Trump campaign chairman Paul Manafort described it as “the last opportunity” for Mueller to “explain to the voters what he’s been doing for the last two years. “ There’s been a not-so-implicit assumption that the indictment of Trump adviser Roger Stone represented the last act of an investigation that was closing up shop, handing off its remaining evidence, and turning off the lights. The narrative that a final report from Mueller was due “any day now” has been playing on an endless loop since at least November, but that idea has been the focus of whole days of reporting since February. The Washington Post was just one of several publishers that went so far as to create Amazon listings for The Final Report of the Special Counsel into Donald Trump, Russia, and Collusion, with a publication date of March 26, in the confident expectation that the report would land on the attorney general’s desk, get passed along in some form, and make its way to the presses by then.

But less than a week before that date, there remains no sign of an actual report. What has emerged, as CNN reports, is a whole flurry of signals from the special counsel’s office that suggest that, far from being stuffed between covers in the next few days, the investigation is kicking into a new gear. And that evidence may also be what’s causing Trump to rise to new levels of paranoia and desperation.

The investigation into the hush money scheme is one place where Trump is not only vulnerable, but where he—in the form of “Individual 1”—has already appeared as an unindicted co-conspirator in a scheme to commit campaign finance violations. Cohen has been convicted on those charges. While Trump has attempted to minimize the importance of campaign finance law, while claiming he never violated it in the first place, House Democrats have made it clear this doesn’t represent the limit of Trump’s exposure. In questioning Cohen, Democrats were careful to outline the fact that simply paying off hush money and disguising it as legal fees represented financial fraud, and they nailed down Trump’s involvement in the conspiracy to commit that fraud.

The redacted pages in the recently revealed documents make it clear that the investigation into these payments, as they relate to both the Trump campaign and the Trump Organization, is still alive and kicking. Almost the entirety of over 18 pages of court documents remains under the marker, but they do have a helpful title that can still be read: "The Illegal Campaign Contribution Scheme."

These documents were revealed by the SDNY, but that doesn’t necessarily mean that they’re the ones doing the investigation. In previous instances, both the special counsel’s office and prosecutors working in other offices have been careful to protect each other’s potential indictments. But no matter who is working the case, the case is still in the works, and still a threat to Trump, Trump’s family, and Trump’s business.

But campaign finance isn’t the only lurking threat revealed by the new spate of documents. There is also more evidence that indicates that the special counsel was concerned about payments made to Cohen’s money-laundering LLC that originated with sanctioned Russian oligarch Viktor Vekselberg. It seems likely that the special counsel’s office could still be tracking down Russia connections, while the SDNY continues to look into the campaign finance and financial fraud case.

Together these documents are more evidence that the investigation is not over. And, worse for Trump, even when it is over, in the form of a report from Mueller, it won’t be over, meaning no more investigation hanging over his head. That’s not enough to explain Trump’s tweets. Because there can be no rational explanation for Trump’s tweets. But it is a very good reason for Trump to feel, more than ever, that there’s a storm ahead.

None of those signs seem to be pointing to Robert Mueller exiting the stage any time soon.