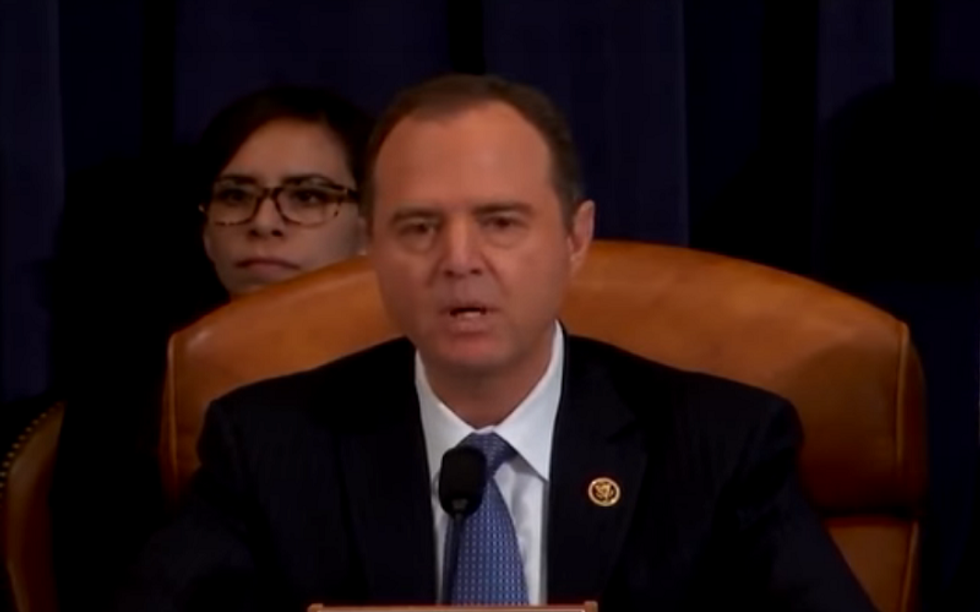 Many are cheering House Intelligence Chairman Adam Schiff's response to Republicans on his Committee calling for his resignation Thursday. Chastising his colleagues, Schiff delivered a powerful four-minute takedown of the GOP's defense of what he called the President's and his team's "immoral," "unethical," "unpatriotic," and "corrupt" behavior.

"My colleagues might think it’s okay that the Russians offered dirt on the Democratic candidate for president as part of what’s described as the Russian government’s effort to help the Trump campaign," Chairman Schiff began (video below, full transcript here.) "You might think that’s okay. My colleagues might think it’s okay that when that was offered to the son of the president, who had a pivotal role in the campaign, that the president’s son did not call the FBI, he did not adamantly refuse that foreign help — no, instead that son said he would ‘love’ the help with the Russians."

Schiff repeated his "you might think" mantra about 20 times in four minutes, and it's ignited an explosion of people on social media who agree that regardless of what Attorney General William Barr would like America to believe, Trump and his team have committed "immoral," "unethical," "unpatriotic," and "corrupt" acts.

They've turned it into a very popular hashtag on Twitter.

#YouMightThinkItsOK has turned into a blistering attack on everything Trump, including all the bad acts his administration is perpetrating.

It is now a rallying cry.

Dear #GOP, #YouMightThinkItsOK to use your attacks on @RepAdamSchiff as a smokescreen to distract from the fact tha… https://t.co/xW9Q0QPwQR
— PurpleGimp (@PurpleGimp) 1553860902

#YouMightThinkItsOK to take a 4-page document by a partisan official that summarizes over 300 pages of legal analys… https://t.co/oAVVhq4E1p
— Eric Wolfson (@Eric Wolfson) 1553862337

#YouMightThinkItsOK to rip babies from their parents at the border, to rip healthcare away from millions of America… https://t.co/3kNeFMt5F8
— Lisa Guerrero 💃🏽 (@Lisa Guerrero 💃🏽) 1553860338

#YouMightThinkItsOK to profit off the Presidency, but I don’t. And the constitution says it’s not okay. #Emoluments
— Jess (@Jess) 1553860039

It's also worth pointing out that all of the evidence outlined in this monumental speech by @RepAdamSchiff is confi… https://t.co/7wcyxE6pvy
— Amy Shaw (@Amy Shaw) 1553864662