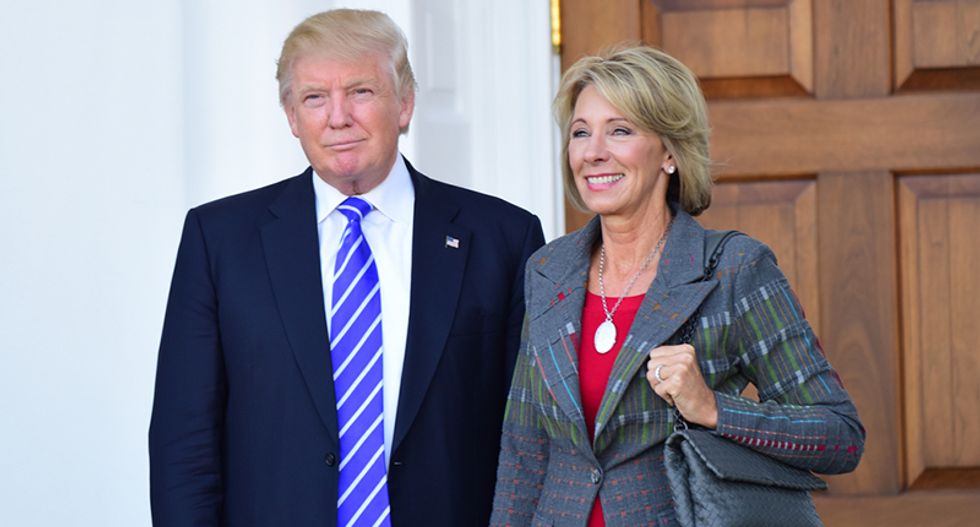 What do you do when thinking people reject your political ideology?

You get rid of thinking people.

The billionaire heiress who bought her position as Donald Trump’s Education Secretary plans to spend $5 billion of your tax dollars on private, religious, and parochial schools.

This would be federal tax credits to fund scholarships to private and religious institutions—school vouchers in all but name.

To make matters even more galling, consider the timing of DeVos’ proposal.

In the beginning of February, Donald Trump Jr. criticized “loser teachers” who he said were indoctrinating school children into—gasp—socialism.

At the end of that same month, DeVos proposed funding Christian madrasas from sea-to-shinning-sea.

But even beyond the blatant hypocrisy, this betrays a fundamental misunderstanding of the differences between public and private schools.

Florida’s GOP Governor Ron DeSantis tweeted that if a school receives public funding—whether it be a charter or voucher institution—it is a public school.

To which DeVos tweeted her glowing approval.

This makes a few things strikingly clear: either (1) these folks have no idea what happens at authentic public schools or (2) they’re pretending not to know so as to further their political and financial ambitions.

Authentic public schools do not indoctrinate children into socialism or any other ideology.

They’ll teach what socialism is and how it has functioned historically without commenting on its merits or deficiencies. It’s up to individual students to decide whether it’s a good thing or not.

Public schools are supposed to be ideologically neutral.

At most, they teach children how to think. They teach media literacy, skepticism, and critical thinking skills.

If that leads kids away from Republican orthodoxy, it’s not the fault of the teacher or the child. It’s a problem with your orthodoxy.

You can’t proclaim the benefits of a marketplace of ideas and then decry that too many ideas are on display.

Nor can you conflate the way a school is funded with what that school actually does and how it teaches.

There is a world of difference between authentic public schools and their market based alternatives—especially the parochial and religious variety.

Authentic public schools do not indoctrinate. Conservatives graduate from these hallowed halls the same as liberals, moderates, and the politically checked out. The difference is that in a world where facts are prized and logic is exercised, conservatism becomes less appealing.

I’m not saying liberalism or progressivism is guaranteed, but they are certainly more fact-based world views than their opposites.

The same cannot be said of the kinds of institutions DeVos wants to bankroll.

They educate kids behind closed doors with little to no transparency for the public about how their money is being spent. But word seeps out of the cracks in the system.

We’ve seen the textbooks they use to teach. Their graduates have returned to the public square to tell us about the instruction they received.

The American Christian Education (ACE) group provides fundamentalist school curriculum to thousands of religious schools throughout the country. Included in this curriculum is the A Beka Book and Bob Jones University Press textbooks. A Beka publishers, in particular, reported that about 9,000 schools nationwide purchase their textbooks.

In their pages you’ll find glowing descriptions of the Ku Klux Klan, how the massacre of Native Americans saved many souls, African slaves had really good lives, homosexuals are no better than rapists and child molesters, and progressive attempts at equal rights such as Brown vs. Board of Education were illegal and misguided. You know—all the greatest Trump campaign hits!

We should not be funding the spread of such ignorance.

Frankly, DeVos’ ambitions have little chance of coming to fruition.

Two years ago, when Republicans controlled both houses of Congress, she wanted to spend $20 billion on the same nonsense. Her party refused to back her.

Now with Democrats in control of the House, it seems even more unlikely that her plan will pass.

But sadly smaller scale versions of it have been allowed by state legislatures throughout the country—often with full support from Democrats.

My own state of Pennsylvania spends $125 million in taxpayer dollars on the Educational Improvement Tax Credit (EITC) and Opportunity Scholarship Tax Credit (OSTC) programs to send children to private/religious schools. And every year legislators ask for more.

Why any Democrat would support conservative indoctrination programs is beyond me.

And this is true even though indoctrination is sometimes unavoidable.

To a limited degree, it may even be desirable. You might even say it’s a normal part of growing up.

Even the most fair-minded parents often want their children to hold at least some of the same values as they do. They want to be able to relate to their kids and view them as a continuation of the kinds of lives they lived.

But what’s okay for parents is not okay for governments.

If Mom and Dad want their kids to have a Biblical education, they should pay for it. The burden should not be shouldered by society since it’s not in society’s interest.

Governments have no right taking public money and using it to prop up private interests. And that’s exactly what this is.

It is political and religious interest. It is a way to circumvent skepticism and free thought.

It’s a way to ensure that in a time where information flows freely and dogmas crumble, people like Donald Trump continue to be elected.