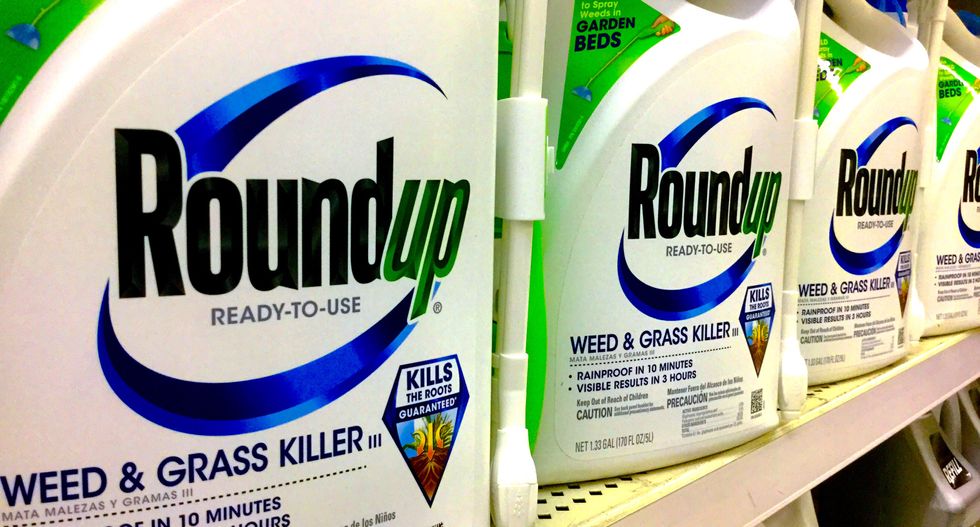 In a landmark verdict against Monsanto that could have far-reaching implications, a federal jury on Tuesday found that the weed-killer Roundup was "a substantial factor" in causing a 70-year-old plaintiff's cancer.

"Today's verdict reinforces what another jury found last year, and what scientists with the state of California and the World Health Organization have concluded: Glyphosate causes cancer in people," Environmental Working Group president Ken Cook said in a statement, referring to the active ingredient in Roundup. "As similar lawsuits mount, the evidence will grow that Roundup is not safe, and that the company has tried to cover it up."

Edwin Hardeman, the plaintiff in the case, was diagnosed with non-Hodgkin's lymphoma (NHL) in 2015 after using Roundup to kill poison oak and weeds on his property for over 20 years. In 2016, Hardeman sued Monsanto, which was acquired bythe German pharmaceutical giant Bayer last year.

"The decision by Bayer to purchase Monsanto, a company with a long history of environmental malfeasance, could go down as one of the worst business decisions ever made," said Cook. "The day of reckoning for Bayer and its cancer-causing weedkiller is getting closer."

The jury's verdict comes just months after Monsanto was ordered to pay over $200 million in damages to a former school groundskeeper Dewayne Johnson, who said Roundup caused his cancer.

Michael Baum, an attorney who represented Johnson, told Buzzfeed that the jury's verdict in the Hardeman case is "a huge win for all Roundup-induced NHL claimants and a devastating loss for Bayer/Monsanto."

In light of a SECOND JURY finding today that #Monsanto #Roundup was a substantial factor in causing cancer, below a… https://t.co/yM9AZMCepd
— Ted Lieu (@Ted Lieu)1553044194.0

Beginning on Wednesday, the jury will consider whether Monsanto should be held liable for its product's role in the development of Hardeman's cancer.

"Mr. Hardeman is pleased that the jury unanimously held that Roundup caused his non-Hodgkin's lymphoma. Now we can focus on the evidence that Monsanto has not taken a responsible, objective approach to the safety of Roundup," Aimee Wagstaff and Jennifer Moore, Hardeman's attorneys, said in a joint statement.

"Instead, it is clear from Monsanto's actions that it does not particularly care whether its product is in fact giving people cancer, focusing instead on manipulating public opinion and undermining anyone who raises genuine and legitimate concerns about the issue," they continued. "We look forward to presenting this evidence to the jury and holding Monsanto accountable for its bad conduct."