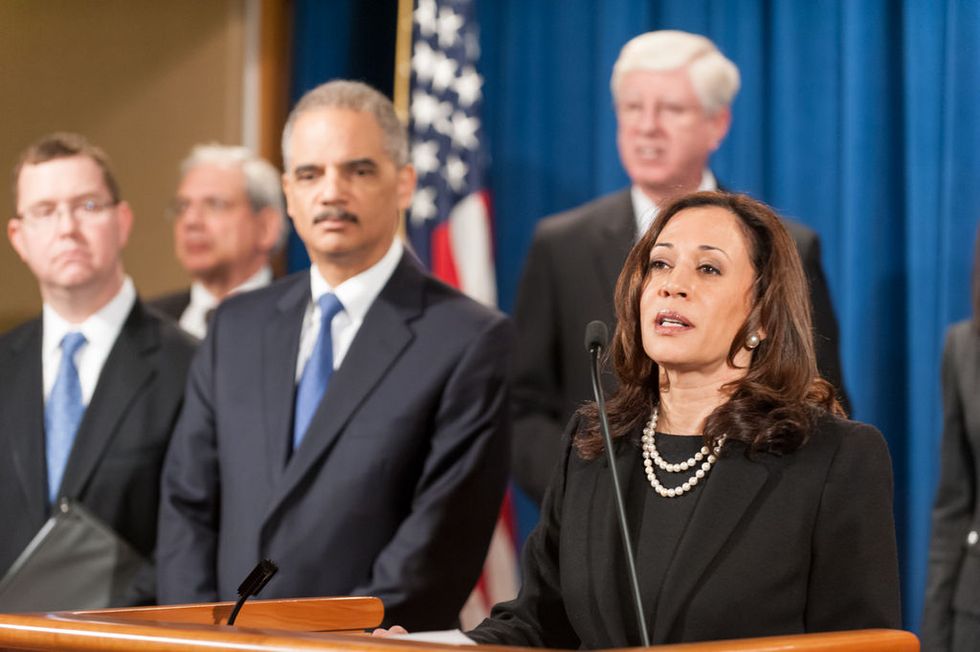 Russia was able to influence our election because they figured out that racism, sexism, anti-Semitism, homophobia, and transphobia are America’s Achilles heel. These issues aren’t only civil rights—they’re also a matter of national security. We have to deal with that.

This kind of rhetoric is a prime example of securitization: the attempt to turn an issue that is not obviously a matter of national security into one. The crux of the message is essentially: if you don’t toe my preferred line on this issue, you will be putting yourselves or your loved ones at risk—and providing comfort or aid to our enemies.

Kamala Harris literally premised her career on securitization. She won her first public office, San Francisco District Attorney, by unseating one of the most progressive criminal justice reform advocates in the country at the time. Harris’ basic argument was that a commitment to sentencing reform and diversion programs was making San Francisco less safe; it was putting criminals before “the people.”

Her bid to shift the conversation—from discussions about social justice to concerns about public safety—paid off. She decisively won the election, despite the reality that violent crime had actually dropped precipitously in San Francisco under her rival’s tenure (perhaps due to the very reforms she sowed public distrust against).

This is why politicians rely on securitization: it is effective. When people come to view something as a security issue, they tend to become more supportive of the person who is promising to keep them safe, and less skeptical of the measures deployed to ensure that safety.

Yet, while a politics of fear is often effective at helping politicians win office, it is typically devastating to liberal democracy: when people are in a fearful state of mind, they become much more susceptible to tribalism, authoritarianism and myopic militancy. They also grow much more willing to tolerate “states of exception” against those whom they deem a threat.

For instance, it is a very short jump from the sort of rhetoric Kamala Harris was deploying to what queer theorist Jasbir Puar dubbed “homonationalism.”

In a homonationalist arrangement, already vulnerable or disenfranchised populations (typically Muslims and/or immigrants) are held up as posing a threat to our enlightened norms, values and way of life in virtue of being insufficiently woke on issues related to gender and sexuality. We have seen this play out in countries across Europe—uniting many on the left and right against Muslims, and migrants from Africa and the Middle East, in the name of feminism, LGBTQ rights and other ‘Western’ values.

As I’ve explained elsewhere, a similar dynamic could easily take hold in the United States. Indeed, there have been moments when it already has (for instance, when the left and right were united on terraforming Afghanistan in order to liberate Afghan women from their ‘regressive’ culture). This is what makes Kamala Harris’ rhetoric so dangerous.

Unfortunately, because perceptions of security are so intimately bound up with political legitimacy, rather than challenging the securitization of a given issue, political rivals usually try to outflank their opponent within the securitized framework instead.

It is unlikely that a political rival would respond to Harris by saying, “We reject your premise, and find it non-constructive that you are trying to conflate civil rights, civil liberties and national security (especially given how often the former are undermined inthenameof the latter).”

No. A Republican critic would likely respond, “You’re absolutely right—identity politics has become a threat to our national security, and must be dealt with accordingly.” In other words, they would double down on the securitized framing, and merely argue it is Democrats who are making us unsafe by their approach to these issues.

Meanwhile, a Democratic rival would be more likely to say, “You’re absolutely right, this is a matter of national security. And that’s why it’s so important that I have a better record (or plan) on these issues than you.”

One may hope that the media could play a role in resisting these dynamics. Unfortunately, research by Michael Stohl, Benjamin Smith and me shows that they tend to reinforce them instead: outlets tend to adopt the preferred security framing of the candidates they lean toward. So unless politicians do the right thing first, media outlets are unlikely to do so either. After all, stoking fear is usually good for their business too.

This leaves it up to voters to reject this nonsense—and to respond with hostility to politicians and media outlets when they try to securitize issues—especially when it is “our” team that is doing it.

And frankly, even if Dems could squeak out a win by leaning hard on securitization, it would almost certainly be a pyrrhic victory for historically marginalized or disadvantaged groups. Kamala Harris’ record as a prosecutor is a telling indicator of what to expect when Democrats take office by these means (see also: the Clintons). It isn’t great.

Musa al-Gharbi is a Paul F. Lazarsfeld Fellow in Sociology at Columbia University. Researchers can connect with his other research, and social media, via his website: musaalgharbi.com.