'What happens in a totalitarian regime': Capitol Police slammed for 'disturbing' physical attacks on reporters 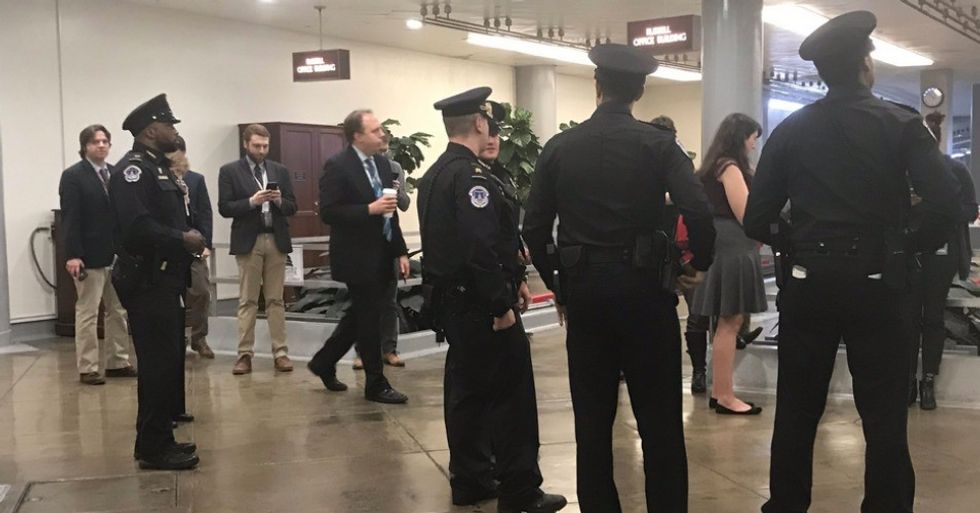 Press freedom advocates and journalists described a Friday report of Capitol Police manhandling and shoving reporters in the Russell Senate Office Building as "bizarre" and "disturbing," with some calling the altercation an incident far more likely to take place in a totalitarian regime than in a democracy.

As Roll Call reported Friday, Capitol Police pushed and "slammed into" reporters on Thursday afternoon around the time that senators were voting on the spending bill. The police attempted to prevent reporters from speaking to lawmakers—a practice that is common in the Senate basement, where the incident took place.

According to Roll Call, some reporters believed the Sergeant-at-Arms had made more Capitol Police available in the Senate building because of the suspected presence of an independent reporter without credentials who had approached senators in the past. But journalists denounced the Capitol Police for handling the situation by assaulting reporters.

"Capitol Police dramatically over-reacted on Thursday and did more harm than good when they prevented accredited reporters from doing their job and further obstructed senators from communicating with the press. There was no call for the police to shove or place their hands on the reporters," said Alison Fitzgerald Kodjak, president of the National Press Club.

According to an audio recording provided to Roll Call, an officer pushed a pregnant reporter and "slammed into" NBC journalist Leigh Anne Caldwell as she was trying to interview Sen. Shelley Moore Capito (R-W.V.). The Capitol Police also repeatedly told reporters that attempting to speak with senators as they walked down the hallway—a common practice on the Hill—was a "violation" and something people "get locked up" for doing. Washington Post congressional reporter Paul Kane disputed the claim on social media.

"It was insane, people were getting shoved into walls," Paul McLeod, a BuzzFeed reporter, told Roll Call. "It was unsustainable. It was violent."

Kane shared an image of the Capitol Police attempting to block the press from reaching senators.

"Feinstein was doing an interview with one reporter, and she just stopped and her jaw just dropped," he told the outlet. "She was confused. She was just unable to keep doing an interview that she wanted to do because the officers were creating such a mess.”

Other journalists wrote that the altercation was the latest evidence that Capitol Police have grown "increasingly aggressive" toward the press recently.

Press freedom advocates have accused President Donald Trump of creating an increasingly hostile environment for the press due to his disdain for journalists who report on his administration and deeply unpopular policies. The altercation took place days after a BBC journalist was physically attacked at Trump's rally in El Paso, Texas, by a man yelling, "Fuck the media!" The National Press Club also stated that journalists' access to reporting on Capitol Hill must be protected.

"At a time when we have seen the press' physical access around Washington reduced—including through fewer White House, State Department and Pentagon news briefings—Capitol Hill remains one of the few bright spots for reporters," said Barbara Cochran, president of the National Press Club Journalism Institute. "We call upon the Sergeant-at-Arms to continue the office's long-standing practice of working with the standing committees in devising access protocols for those times when heightened-security is warranted."