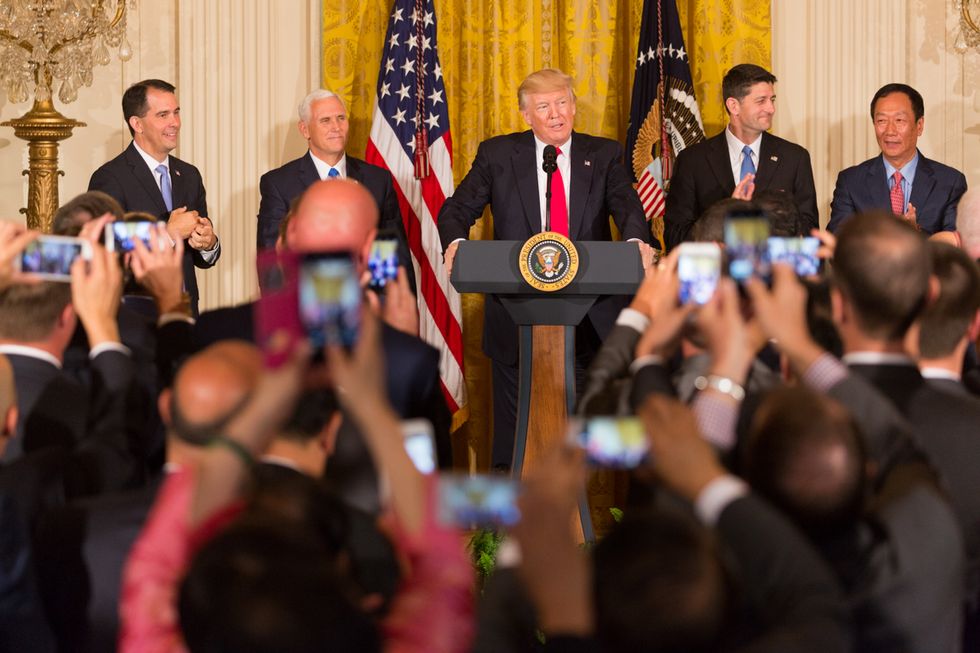 On Friday, CNBC published an article with the headline, “Foxconn does damage control over Wisconsin factory” — yet when Trump linked to the article on Twitter, he claimed victory: "Great news on Foxconn in Wisconsin after my conversation with Terry Gou!”

But as journalist Aaron Rupar noted on Twitter, the information in the CNBC article is hardly great news for Wisconsin’s blue-collar workers.

Rupar tweeted, “The headline of the story Trump describes as ‘great news’ is, ‘Foxconn does damage control over Wisconsin factory,’ and the article makes clear the company hasn’t committed to creating a single manufacturing job in Wisconsin.”

When Trump and Walker announced the Foxconn deal in 2017, they insisted it would be a major victory for blue-collar workers in Wisconsin — and billions of dollars in tax incentives were offered to lure Foxconn to that midwestern state. Foxconn, according to this week’s announcements, still plans to do business in Wisconsin. But the electronics giant has made it clear that instead of creating numerous jobs for blue-collar workers in that Rust Belt state, the jobs will be mainly white-collar jobs that typically require a college degree.

MSNBC’s Chris Hayes weighed in on the Foxconn damage control, sarcastically tweeting, “They are also announcing a bridge for sale.”

Wisconsin is an important state for Trump. Although Wisconsin had been considered a solid blue state, Trump pulled off a shocking upset when he won it in 2016. Not since President Ronald Reagan in 1984 had a Republican carried Wisconsin in a presidential election, and a big part of Trump’s Rust Belt strategy — which also brought unexpected wins in Pennsylvania and Michigan — was a heavy emphasis on bringing blue-collar manufacturing jobs back to the United States. And the Foxconn deal was promoted as Trump fulfilling one of his main campaign promises.

On June 29, 2018, Trump boasted on Twitter, “The new plant being built by Foxconn in Wisconsin is incredible. Congratulations to the people of Wisconsin and to Governor Scott Walker @GovWalker and his talented representatives for having pulled it off. Great job!”

It remains to be seen how well Trump will perform in the 2020 election, but one thing’s for sure: He won’t be able to campaign on persuading Foxconn to bring thousands of new factory jobs to Wisconsin.