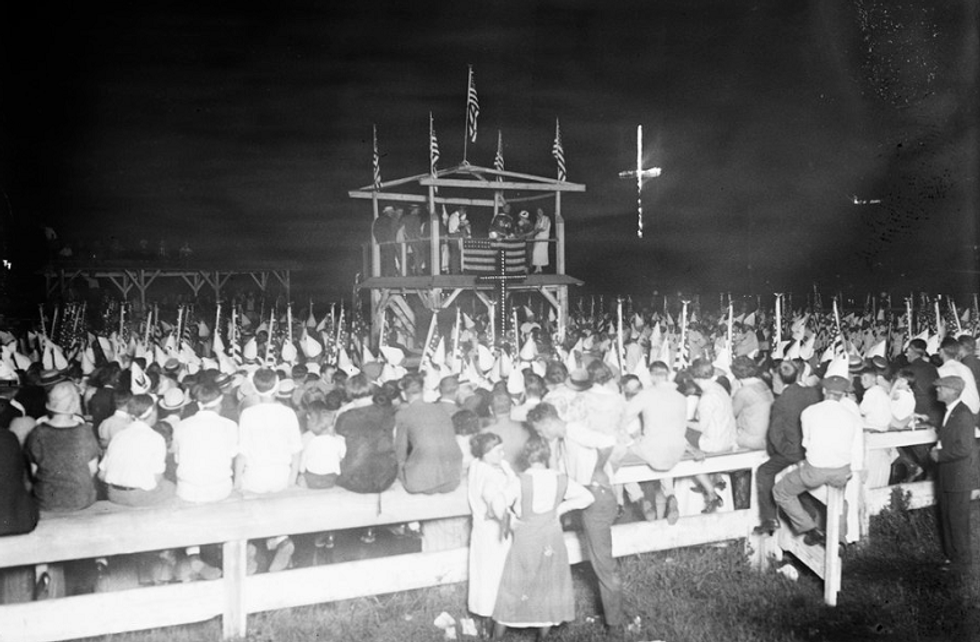 On February 14, the Democrat-Reporter, a local newspaper in Linden, Alabama, ran a hideous editorial calling for the return of the KKK. On Monday, publisher Goodloe Sutton confirmed that he was the author of the racist screed, according to the Montgomery Advertiser.

"Time for the Ku Klux Klan to night ride again," wrote Sutton. "Democrats in the Republican Party and Democrats are plotting to raise taxes in Alabama ... this socialist-communist idealogy [sic] sounds good to the ignorant, the uneducated, and the simple minded people."

"Slaves, just freed after the civil war, were not stupid. At times, they borrowed their former masters' robes and horses and rode through the night to frighten some evil doer. Sometimes they had to kill one or two of them, but so what," continued Sutton. "Seems like the Klan would be welcome to raid the gated communities up there. They call them compounds now. Truly, they are the ruling class."

When confronted by the Advertiser, Sutton was completely unremorseful and actually doubled down, suggesting the KKK should start lynching people again.

"If we could get the Klan to go up there and clean out D.C., we'd all been better off," said Sutton. "We'll get the hemp ropes out, loop them over a tall limb and hang all of them." The population of Washington, D.C. is 48 percent African-American.

It's not bad to lynch people in D.C., said Sutton, because "these are socialist-communists we're talking about. Do you know what socialism and communism is?" The KKK, he added, "didn't kill but a few people" and "wasn't violent until they needed to be."

Sutton depicts the KKK as if they were just a bunch of economic populists sticking it to the man, supported by former slaves. In fact, they were quite the opposite — a racial terrorist organization founded in the immediate aftermath of the Civil War to intimidate newly freed slaves trying to exercise their civil rights.

The KKK existed in three "phases". The first KKK in the 1860s was a paramilitary group in the South that enforced white supremacy with murders and assaults; the second KKK in the 1920s was a political movement of millions across the whole country that rallied to oppose (and often turned violent against) anything that wasn't traditional, white, Protestant dominance of American culture; and the third KKK in the 1960s arose to oppose the civil rights movement, and relied on firebombings of black churches and the homes of activists to spread fear. The KKK continues to this day, albeit as a few thousand scattered members of disjointed, often opposed groups.

American society had supposedly moved, if certainly not beyond racism itself, then at least beyond the expression of overt support for white supremacy. Unfortunately, as Sutton demonstrates, some people yearn for the days when racial terrorism was a constant and ever-present force.