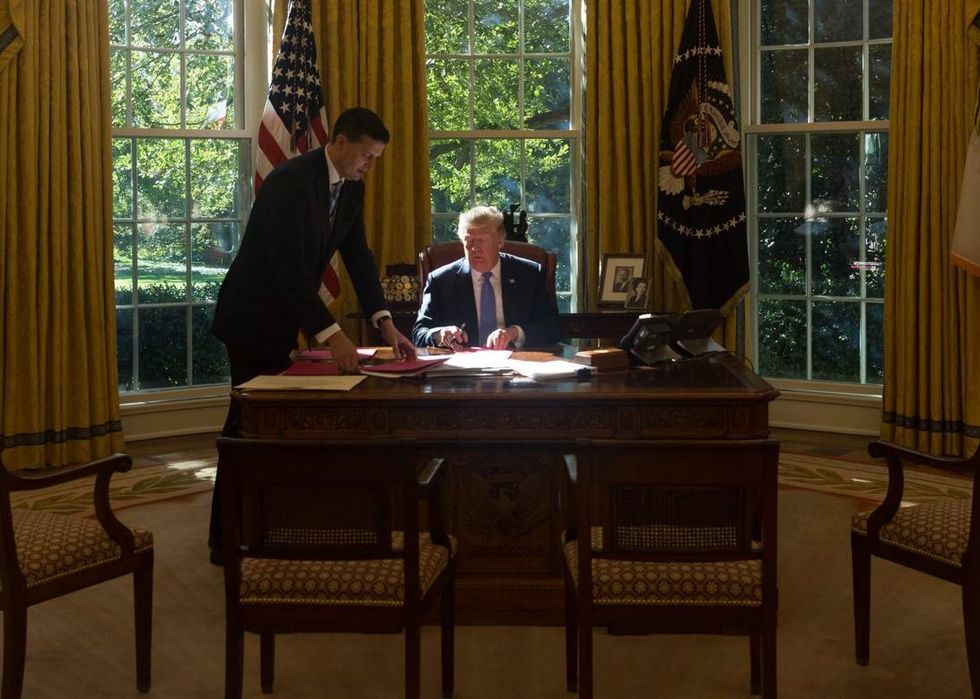 When President Barack Obama was in office, Donald Trump used to attack him repeatedly and baselessly for supposedly not working hard enough for the American people. Since he's become president, Trump's Twitter habits have revealed his own excessive consumption of cable news, his golf schedule displayed an ample appetite for leisure, and reports found that his staff schedules large bulks of "executive time" — during which he has no formal duties — into his days.

And on Sunday, Axios reported on three months worth of his leaked schedules showing that 60 percent of his routine is taken up with so-called "executive time," revealing a particularly work-averse and structure-resistant president. He's not necessarily doing nothing during this time — he can have impromptu meetings and there are some events kept off even these schedules — but it shows a lack of formality to the president's day that is deeply troubling, given the number of responsibilities he bears. You simply cannot get a handle on everything a president needs to know when flying by the seat of your pants.

Axios also reported: "The difference between Trump and his recent predecessors is eye-popping."

In responding to the story, the White House essentially confirmed the schedules' accuracy and offered a series of bizarre defenses of the president's behavior.

"President Trump has a different leadership style than his predecessors and the results speak for themselves," said Press Secretary Sarah Sanders.

Director of Oval Office Operations Madeleine Westerhout had an even odder defense: "What these don’t show are the hundreds of calls and meetings [Trump] takes everyday. This POTUS is working harder for the American people than anyone in recent history."

Whether she knows how hard Trump works compared to other presidents is certainly disputable. But the idea that the president takes "hundreds of calls and meetings" in a day — that is, literally more than 200 — is absurd, and it would be a waste of time if it were true. Who could possibly make sense of information from 200-plus meetings or conversations in a day?

Her responses was troubling for another reason.

"In which the Director of Oval Office Operations publicly concedes that the President routinely conducts official business by telephone or in-person meetings without publicly noting that these calls/meetings even exist—let alone identifying their participants or subject matter..." said Steve Vladeck, a University of Texas law professor, said in response.

Bradley Moss, a national security lawyer, noted that all these meetings should be recorded in compliance with the Presidential Records Act.

Many observers, including White House officials, noted that the leak from a top-level staffer itself suggests serious discord and dissension in the administration.

Counselor to the president Kellyanne Conway claimed that the schedule that leaked is accessible to about 400 people internally but that another, more detailed version is held by a closer circle of aides. But reporter Olivia Nuzzi found that a former White House official said the leaked schedule goes to a much smaller group of people than Conway claimed.

"A more detailed schedule is circulated among a small group of West Wing staff involved in his entire day, however, according to the former official. It includes things like Trump’s personal meetings and attorney meetings," she said. "I’m told by this former official that early on, everyone sort of received everything, something that was ultimately changed. The documents obtained by [Axios] are quite recent, beginning after the midterms."