The Founding Fathers established the Electoral College to stop someone like Trump from becoming president. Here's why it's time to scrap it 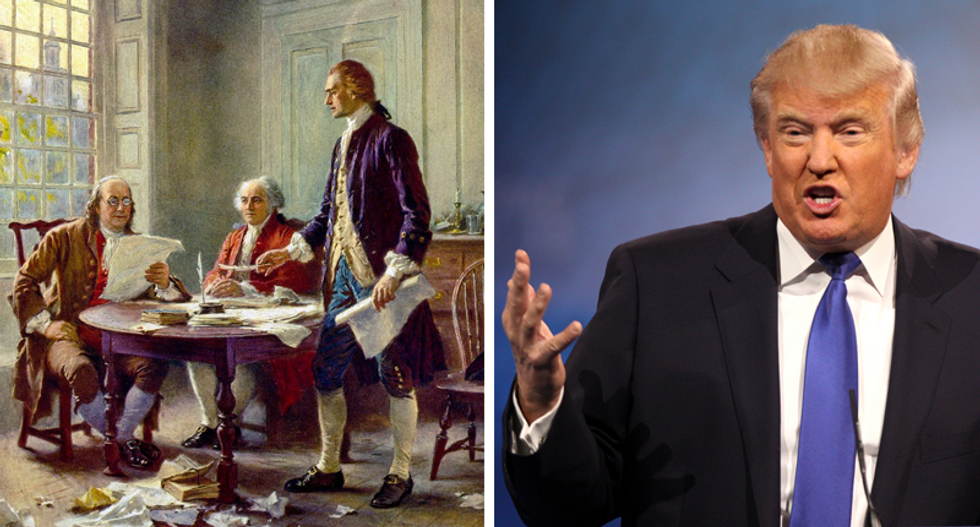 America’s Founders and Framers thought they could use the Electoral College to prevent somebody like Donald Trump from ever becoming president. Unfortunately, they were wrong, and now we’re paying the price.

Given how the Electoral College hasn’t protected us from getting a president beholden to a (or multiple) foreign power(s) as president, it’s time to do away with it.

Most people have a pretty limited understanding of the Electoral College, but they know that it works against the democratic notion of the public electing its chief executive. There are organizations and a smattering of political figures who say as much. A recent poll indicates this, too.

What is not as well understood is the history of why it was chosen as the way to select a president.

It’s often said that the Electoral College was brought into being to perpetuate or protect the institution of slavery, and, indeed, during the first half-century of America, it gave the slave states several presidents who wouldn’t have been otherwise elected.

This is because there’s one elector in the College for every member of the House and Senate (and three for the District of Columbia). When the three-fifths compromise was in effect (until just after the Civil War), slave states had more members in the House of Representatives than the size of their voting public “deserved.”

This is why when Madison proposed the Electoral College, the Framers seized on it as a compromise/solution after weeks of drawn-out and often angry debate on how to select a president.

But, according to the Framers of the Constitution themselves, the real reason for the Electoral College was to prevent a foreign power from placing their stooge in the White House.

Today we’re horrified by the idea that Donald Trump may actually be putting first the interests of foreign governments, and that money and other efforts from multiple foreign entities may have helped him get elected.

It’s shocking, something we never even really took seriously when, for example, the movie “Manchurian Candidate” came out. What a cute idea for a movie, we thought; that could never happen here.

But this was actually a big deal for the founding generation. One of the first questions of any candidate for president during that era was, “Is he beholden in any way to any other government?”

At the time of the Declaration of Independence, it’s estimated that nearly two-thirds of all citizens of the American colonies favored remaining a British colony (Jimmy Carter’s novel The Hornet’s Nest is a great resource); there were spies and British loyalists everywhere, and Spain had staked out their claim to the region around Florida while the French were colonizing what is now Canada and Louisiana. Foreign powers had us boxed in.

In 1775, the year the Revolutionary War unofficially started, virtually all of the colonists had familial, friendship or business acquaintances with people whose loyalty was suspect or who were openly opposed to American independence.

It was rumored that Ben Franklin was working as a spy for British intelligence (and, it turns out, evidence shows he was, only against France when he lived in Paris). Federalists, in particular, were wary of Franklin’s “internationalist” sentiments.

Jefferson was living in France when the Constitution was being written, and his political enemies were, even then (it got much louder around the election of 1800), whispering that he had, at best, mixed loyalties. In response, he felt the need to protest to Elbridge Gerry that, “The first object of my heart is my own country. In that is embarked my family, my fortune, and my own existence.”

When John Adams famously defended British soldiers who, during an anti-British riot on March 5, 1770, shot and killed Crispus Attucks and four others, he was widely condemned for being too pro-British, an issue that recurred in 1798 when, as president, Adams pushed the Alien and Sedition laws through Congress over Vice President Thomas Jefferson’s loud objections. British Spy Gilbert Barkley wrote to his spymasters in London that Quakers and many other Americans considered Adams an enemy to his country (Geoffrey Seed, A British Spy in Philadelphia, PMHB, 85:21–22 [Jan. 1961]).

When Adams blew up the XYZ Affair and nearly went to war with France that year, it was rumored among his political opponents that he was only doing it to solidify his “manly” and “patriotic” credentials. Historian and author John Ferling in his book A Leap in the Dark: The Struggle to Create the American Republic notes that Adams’ anti-British rhetoric worked at changing the perception of him: “By mid-1798 he was proclaimed for his ‘manly fortitude,’ ‘manly spirited’ actions, and ‘manly independence.’”

And after the Revolutionary War, the nation was abuzz about one of that war’s most decorated soldiers, Benedict Arnold, once considered a shoo-in for high elected office, selling out to the British in exchange for money and a title.

So it fell to a fatherless man born in Bermuda to explain to Americans that the main purpose of the Electoral College was to make sure that no agent of a foreign government would ever become president.

Back then, America was so spread out it would be difficult for most citizen/voters to get to know a presidential candidate well enough to spot a spy or traitor, Alexander Hamilton explained in Federalist 68. Therefore, the electors—having no other governmental duty, obligation, or responsibility—would be sure to catch one if it was tried.

“The most deadly adversaries” of America, Hamilton wrote, would probably “make their approaches [to seizing control of the USA] from more than one quarter, chiefly from the desire in foreign powers to gain an improper ascendant in our councils.”

But influencing public opinion or owning a senator was nothing compared to having their man in the White House. As Hamilton wrote, “How could they better gratify this, than by raising a creature of their own to the chief magistracy [presidency] of the Union?”

But, Hamilton wrote, the Framers of the Constitution “have guarded against all danger of this sort, with the most provident and judicious attention.”

The system they set up to protect the White House from being occupied by an agent of a foreign government was straightforward, Hamilton bragged. The choice of president would not “depend on any preexisting bodies of men, who might be tampered with beforehand to prostitute their votes.”

Instead, the Electoral College would be made up of “persons [selected] for the temporary and sole purpose of making the appointment.”

The electors would be apolitical because it would be illegal for a senator or House member to become one, Hamilton wrote:

And they have excluded from eligibility to this trust, all those who from situation might be suspected of too great devotion to the President in office. No senator, representative, or other person holding a place of trust or profit under the United States, can be of the numbers of the electors.

This, Hamilton was certain, would eliminate “any sinister bias.”

Rather than average but uninformed voters, and excluding members of Congress who may be subject to bribery or foreign influences, the electors would select a man for president who was brave of heart and pure of soul.

“The process of election [by the electoral college] affords a moral certainty,” Hamilton wrote, “that the office of President will never fall to the lot of any man who is not in an eminent degree endowed with the requisite qualifications.”

Indeed, while a knave or rogue or traitor may fool enough people to even ascend to the office of mayor of a major city or governor of a state, the Electoral College would ferret out such a traitor.

Hamilton wrote, “Talents for low intrigue, and the little arts of popularity, may alone suffice to elevate a man to the first honors in a single State; but it will require other talents, and a different kind of merit, to establish him in the esteem and confidence” of the men in the Electoral College who would select him as president “of the whole Union...”

Hamilton’s pride in the system that he himself had helped build was hard for him to suppress.

He wrote, “It will not be too strong to say, that there will be a constant probability of seeing the station filled by characters preeminent for ability and virtue.”

Unfortunately, things haven’t worked out that way. Because of the three-fifths compromise that gave more electors to the slave states than their voting population would indicate, the Electoral College handed the White House to four Virginia slaveholders among our first five presidents. Since that compromise has been eliminated, it continues to wreak mischief in putting George W. Bush and Donald Trump into office.

Hamilton never envisioned a day when a man so entangled in financial affairs with foreign governments as is Donald Trump could even be seriously considered, because, in his mind, the electors would carefully investigate the candidate. That hasn’t happened in over a century, so, by his standards, the electors totally failed in their job in the 2016 election.

The Electoral College was a compromise designed to keep the president above political considerations, and sold to the public as a way to prevent an agent (witting or unwitting) of a foreign power from becoming president. It has failed on both counts.

Through the arc of time since her founding, America has constantly—albeit in fits and starts—expanded democracy. From expanding the vote to include racial minorities and women, to amending the Constitution to allow for citizens to vote for U.S. senators rather than having them appointed by often-corrupted state legislatures, average citizens of all races and genders have been brought into the decisions around who will lead us.

But in the past two decades, the Electoral College has brought us two presidents (George W. Bush, who lost the popular vote by 500,000 and Trump, who lost by 3,000,000) who were rejected by a majority of Americans. This is fundamentally undemocratic.

It’s time to take another step forward in fine-tuning our republic and abolish the Electoral College.