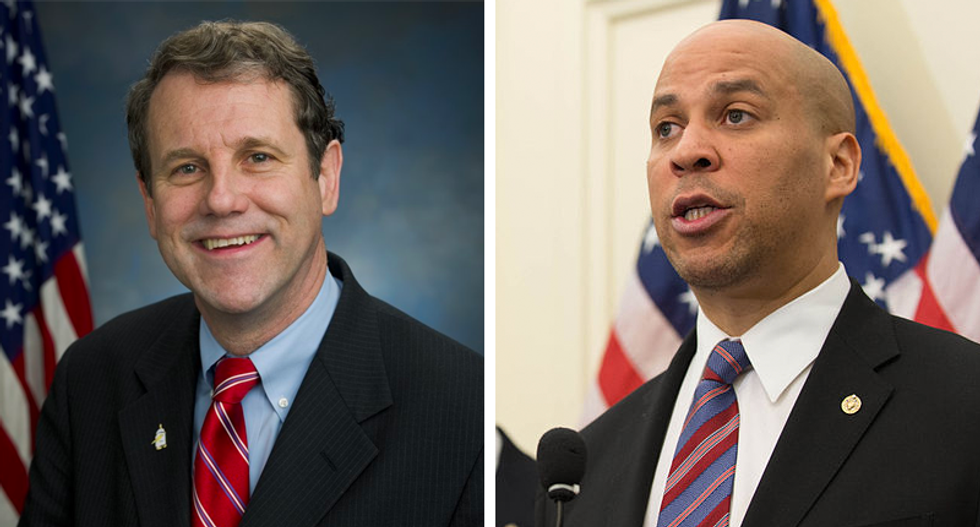 Last month, Brown launched a “dignity of work” listening tour designed, in part, to gauge interest in a potential presidential run. As the Daily Beast reported at the time, the “Dignity of Work Tour” is centered on a phrase Brown “has been using to describe his political philosophy.”

“Dignity of work means hard work should pay off for everyone, no matter who you are or what kind of work you do,” Brown said in a statement  announcing his tour. “When work has dignity, everyone can afford health care, education, and housing. They have power over their schedules and the economic security to start a family, pay for day care and college, take time off to care for themselves or their families when they are sick, and save for retirement.”

In recent weeks, Booker, who threw his hat into the 2020 Democratic primary on February 1, has begun using the phrase in his own political campaign. While discussing the concept a Des Moines, Iowa event Saturday, Booker also sported a gravely voice, a feature Brown is known for.

Riffing on the similarities, Brown on Sunday lightly jabbed Booker for cribbing his "dignity of work" platform, while simultaneously encouraging other 2020 contenders to get on board with the message.

“It’s one thing for you to talk about the dignity of work, but to be willing to lose your voice to sound like me while doing it, that shows real commitment,” Brown tweeted.

“Fighting for the dignity of work is how we should govern and it’s how we win in 2020,” he added.

While the Iowa caucuses won’t take place until next February, the crowded Democratic field has maintained a notable sense of camaraderie as candidates vie for the 2020 nomination. After announcing his run, Booker called his female Democratic opponents Sen. Kamala Harris (D-CA) and Sen. Kristen Gillibrand (D-NY) his “sisters" while "playing down the idea that there will be much friction with his colleagues," Politico reports.

“There will be some sibling rivalry,” Booker told Politico. “But at the end of the day we’re family.”