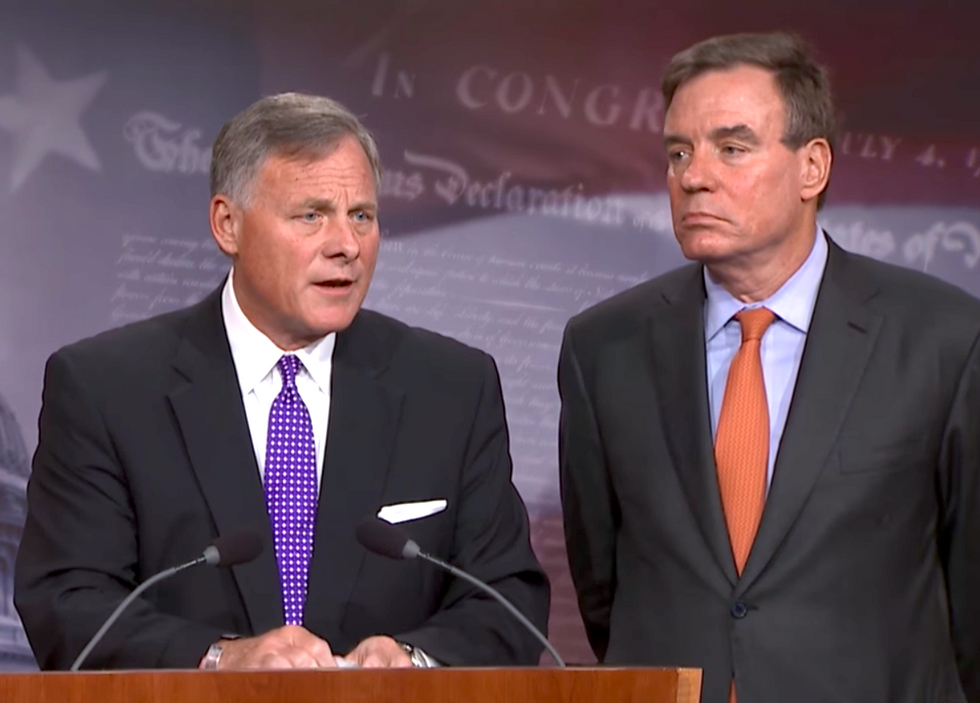 Sen. Richard Burr (R-NC) has earned himself a fan in President Donald Trump with his comments about the ongoing Senate Intelligence Committee investigation into Russian interference in the 2016 election, which he chairs.

"Senator Richard Burr, The Chairman of the Senate Intelligence Committee, just announced that after almost two years, more than two hundred interviews, and thousands of documents, they have found NO COLLUSION BETWEEN TRUMP AND RUSSIA!" Trump tweeted Sunday. "Is anybody really surprised by this?”

He was referring to a comment Burr made last week, when he told CBS News: "If we write a report based upon the facts that we have, then we don't have anything that would suggest there was collusion by the Trump campaign and Russia."

He echoed the comments to NBC News on Tuesday: "There is no factual evidence of collusion between the Trump campaign and Russia."

In a report, NBC News seemed to bolster Burr's assertion. It said that both Democrats and Republicans on the Senate Intelligence Committee agreed that they have uncovered "no direct evidence of a conspiracy between the Trump campaign and Russia."

But Sen. Mark Warner (D-VA), the ranking member on the committee, distanced himself from Burr's claims.

"Respectfully, I disagree," he said on Tuesday, as CNN reported. "I'm not going to get into any conclusions I've reached because my basis of this has been that I'm not going to reach any conclusion until we finish the investigation. And we still have a number of the key witnesses to come back."

And many legal experts pointed out that Burr's comments and the NBC report bizarrely twisted the standards of evidence. "Direct evidence" is a particular qualifier, and it wouldn't preclude the committee of having discovered reams of damning circumstantial evidence, which is used in criminal cases all the time.

More to the point, though, the NBC News report's equivocation between "conspiracy" and "collusion" is unhelpful. Many have argued that "conspiracy" is the most likely crime Trump or his associates might be charged with if criminal activity is discovered in its interactions with Russian agents during the campaign, though many other crimes may also be in play. But it's Special Counsel Robert Mueller who is directly responsible for uncovering and charging crimes regarding Russian interference, not the Senate.

The Senate Intelligence Committee's job is much broader; because it doesn't have the resources or authority to prosecute crimes, its aim is to uncover important matters relevant to the public interest. Whether Trump or his campaign colluded with the Russians — that is, cooperated in a secret or underhanded way to gain an advantage — is of central importance to the country, even nothing illegal was done by the Trump team.

And given this understanding of the committee's task, it's clear that there is decisive public evidence that Trump's team colluded with the Russians on multiple occasions. For example:

All of these incidents should uncontroversially be seen as, at the very least, evidence of collusion, if not outright collusion itself. Some of it is even literally the criminal act of conspiracy.

Given this fact, it's very difficult to see why Burr — who has generally been regarded as above the partisan fray much more than, say, Rep. Devin Nunes (R-CA), who used to chair the House Intelligence Committee — is going along with Trump's obviously false "no collusion line."

Reporter Marcy Wheeler noted on her blog that, in the case of Manafort's actions, in particular, the reasonable GOP response would be anger at Manafort:

But they’re not. For some reason, Republicans are not squawking about the explanation for this data hand-off that would suggest the campaign didn’t expect to benefit.

One obvious reason that Republicans aren't mad is that Trump isn't mad, and they take their cues from him. Trump has praised Manafort, even though one would normally expect that a politician whose campaign manager engaged in the devious and criminal behavior Manafort has admitted to would be furious — at least if the politician wasn't aware of the behavior.

In the same way that the GOP has let Trump get away with not releasing his tax returns after he promised to do so, they continue to provide cover for his "no collusion" lie, even when many forms of collusion have been decisively demonstrated. It's possible Republicans know what Trump is covering up and have decided to help him. But more likely, they have no idea what they're helping to conceal from the American people; they've inferred from Trump's behavior that there's something deeply damning looming over him — and the party is doing its best to keep it under wraps.