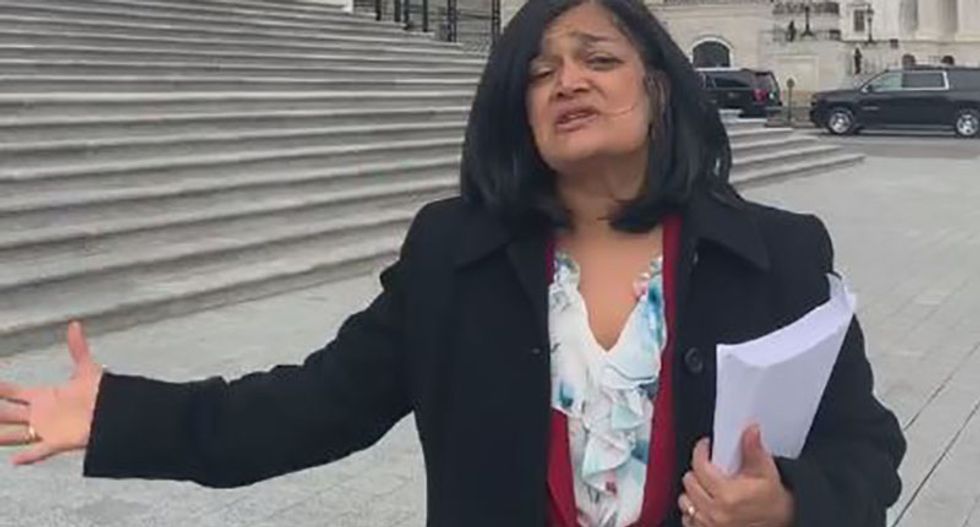 In a historic step toward replacing America's uniquely expensive and deadly for-profit healthcare system with a humane program that would leave no one behind, Rep. Pramila Jayapal (D-Wash.) on Wednesday will officially introduce Medicare for All legislation that policy experts and advocates have praised as comprehensive, strong, and "battle-ready."

"The state of our healthcare system is absolutely atrocious," Jayapal told reporters on the eve of the bill's release. "How is it possible that the United States, the richest country in the world, is the only major country that does not guarantee healthcare to our residents?"

People all over the U.S., she added, "are literally dying because they can't afford insulin or the cancer treatment they need."

What's needed, she said, is a "complete transformation of our health care system and we mean a system where there are no private insurance companies" providing essential healthcare services that would be guaranteed to all under her proposal. And what universal care means, she explained, was simple: "Everybody in, nobody out."

Under Jayapal's plan, the U.S. would transition to Medicare for All over a two-year period and every American would receive comprehensive coverage, including dental, vision, reproductive health services, mental health, long-term care, and more—all of which would be free at the point of use.

According to the congresswoman's office, "The Medicare for All Act of 2019 improves and expands the overwhelmingly successful and popular Medicare program, so that every person living in the United States has guaranteed access to healthcare with comprehensive benefits."

Scheduled for 11:15 AM ET, watch the introduction of the bill live streamed here:

In her explainer on the bill at Vox, journalist Sarah Kliff's called it "the most ambitious plan for government-run health care yet." Kliff reports:

Jayapal’s bill envisions a future where all Americans have health coverage and pay nothing out of pocket when they visit the doctor or hospital. Her plan, the Medicare for All Act of 2019, describes a benefit package that is more generous than what other single-payer countries, like England or Canada, currently offer. The benefits in Jayapal’s bill are even more generous than those included in Sen. Bernie Sanders (I-VT) Medicare-for-all plan.

Along with lead co-sponsor Rep. Debbie Dingell (D-Mich.), Jayapal's 120-page legislation will be unveiled with the original backing of 106 House Democrats, and the Washington congresswoman said she expects that number to rise quickly amid surging grassroots energy behind Medicare for All as the only solution to America's healthcare crisis.

Organizations and labor unions backing the bill—including Public Citizen, National Nurses United, Center for Popular Democracy, Business Initiative for Health Policy, the American Federation of Teachers (AFT), and Physicians for a National Health Program (PNHP)—say that it has set a new bar for single-payer legislation in Congress, and that no one who believes in creating an affordable and universal system of care should settle for anything less.

"Accept no substitutes—only single-payer, Medicare for All can fix the grave dysfunctions and injustices of the American healthcare system," said Dr. Adam Gaffney, president of PNHP and a critical care physician and faculty member at Harvard Medical School.

"Congress shouldn't be distracted with incremental plans like a Medicare buy-in or public option," Gaffney added, referring to the numerous half-measures Democrats have introduced as supposedly more "pragmatic" alternatives to Medicare for All. "The only way to achieve universal and comprehensive coverage is to eliminate the profits and waste of the private insurance industry, which drains hundreds of billions of dollars from our health care system each year."

Robert Weissman, president of Public Citizen, lamented, "In America, we pay more—much more—for healthcare than other countries, and we get less—much less."

A recent Public Citizen report, as Common Dreams reported last month, found that a Medicare-for-All system would reduce administrative costs by $500 billion per year and would cost patients less than employer-sponsored insurance. Showing the immense popularity of such a plan, as Common Dreams also recently reported,  a January 2019 Harvard/Politico poll found that 68 percent of all voters, including 70 percent of Independents and 84 percent of Democrats, said providing health insurance coverage for everyone through a taxpayer-funded national plan is a high priority.

As Jayapal told reporters on Tuesday, she and her allies both inside and outside of Congress "will be pushing [the bill] as far as we can, as hard as we can, as fast as we can. Enough nibbling around the edges. We really need to transform the system."

To that end, National Nurses United (NNU)—the nation's largest nurses union and a longtime supporter of single-payer healthcare—has been among the groups organizing on the ground in states and local communities nationwide in order to build up grassroots support for Jayapal's bill in the House and a similar bill introduced by Sen. Bernie Sanders (I-Vt.) in the Senate.

"As the largest union of registered nurses in the country, we could not be more proud of Rep. Jayapal for leading the way on this legislation that will change and save our patients' lives," said NNU executive director Bonnie Castillo, RN, who praised the congresswoman's plan as "the most comprehensive Medicare for All act we have seen to date."

"It's the right bill, at the right moment—and now we are organizing an unprecedented grassroots movement to demand that our elected officials support this legislation," Castillo added, pointing to the more than 1,500 Medicare for All actions planned throughout the country to continue building grassroots momentum behind the plan.

Today we make history: nurses will join @RepJayapal in Washington, DC as she introduces the #MedicareForAll Act of… https://t.co/aduU233FTv
— California Nurses (@California Nurses) 1551273155.0

While Jayapal's Medicare for All bill comes during a moment of unprecedented grassroots excitement, it will also be released as the insurance and pharmaceutical industries are marshaling their vast resources and political clout to squash single-payer and preserve the immensely profitable status quo.

As the details of Jayapal's bill trickled out Tuesday night ahead of its official release, the Partnership for America's Health Care Future—a coalition formed by leading pharma and insurance interests—put out a statement slamming Medicare for All as a "disruptive one-size-fits-all proposal" that is "the wrong path forward."

Directed by Lauren Crawford Shaver, a former staffer on Hillary Clinton's 2016 presidential campaign, the Partnership is reportedly planning "a big nationwide effort" to squash Medicare for All before it gets off the ground. The coalition has the backing of the American Medical Association, the American Hospital Association, and other major private healthcare interests.

But while the Partnership and other powerful single-payer opponents like the U.S. Chamber of Commerce have pointed to the supposedly extraordinary costs of a universal program like Medicare for All, supporters have countered by citing recent studies—including one by a Koch-backed think tank—showing that single-payer would save the U.S. public trillions of dollars over the next decade.

"It's easy to pay for something that costs less," said economist Robert Pollin, co-director of the Political Economy Research Institute (PERI) at the University of Massachusetts, who authored a study late last year showing Medicare for All would save the U.S. more than $5 trillion over ten years.

Activists and policy experts have argued that Jayapal's legislation is sufficiently strong and comprehensive to withstand the insurance industry's assault, but the congresswoman emphasized that a mass mobilization of ordinary people across the nation will be necessary to compete with and ultimately overcome Medicare for All's deep-pocketed opponents.

"Healthcare is a human right. We will need every single person in the country to help us, to stand with us, to organize, and to fight for this," Jayapal declared. "Because the industry lobby is going to pour hundreds of millions of dollars into killing this bill, saying it costs too much, scaring you into thinking you're giving up something, pitting the healthy against the sick and the young against the old."

"It's time to ensure that healthcare is a right and not a privilege, guaranteed to every single person in our country," Jayapal concluded. "It is time for Medicare for All."