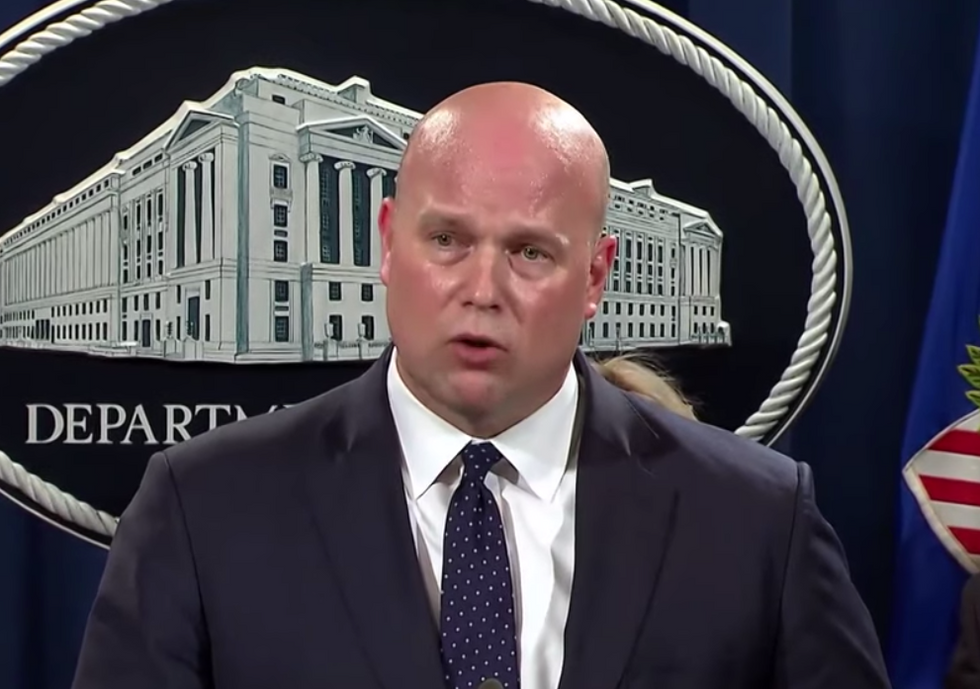 When Matthew Whitaker assumed the role of acting attorney general in November 2018 as part of a dubious scheme to subvert the Justice Department's chain of command, he told friends that his purpose was "jump on a grenade" for President Donald Trump, according to a New York Times report.

Many argued at the time that his appointment was a clear — and likely unconstitutional — effort by the president to gain control over the sprawling investigations into him and his allies, including but not limited to Special Counsel Robert Mueller's Russia probe.

But, for all that, it seems to have failed. During Whitaker's tenure, Mueller moved forward with his investigation, subpoenaing people and organizations and indicting Roger Stone, a longtime friend of Trump. The investigation touching on the president from the Southern District of New York has apparently been moving forward too — CNN reported that they've sought interviews with executives in the Trump Organization.

In an interview with The New Yorker, New York Times reporter Michael Schmidt, one of the co-authors of the recent New York Times report on Trump's apparent efforts to obstruct the investigations, revealed why he believes Whitaker failed to fulfill the president's wishes.

He noted that many people in the department that feared he was there to do the president's bidding. But as it turns out, that's not so easy.

"I think that, when we get a fuller picture of this, we will continue to see that Whitaker ran into forces that were far greater and stronger than he thought he would face, and ultimately was not that successful in helping the President," Schmidt said. "...I do think it is harder to influence investigations once they are so far along the way that the Mueller one is, and the way that the Southern District of New York one on Cohen is. And, because of that, I think even if you are the Attorney General, in charge of the department, you are constrained in some ways about what you can and cannot do."

He continued, explaining what held Whitaker back:

I think people at the Justice Department. I think it’s because of a structure of how the Justice Department operates, how cases are run by U.S. Attorneys’ offices across the country, and the fact that so many people are paying attention to this issue, whether it’s Capitol Hill or the media.

It's a provocative answer because many outside observers familiar with the Justice Department actually offered this is as a prediction when Whitaker was installed. Despite the apparent malign reasons behind his appointment, they claimed, the structure of the Justice Department and its internal pressures would prevent him from doing anything to subvert the fundamental purpose fo the investigations. One example of these pressures comes from the new report from the Times: It said that Trump asked Whitaker to put the recused U.S. Attorney Geoffrey Berman from SDNY back in charge of the of the investigation of him. But Whitaker reportedly refused, as Berman was rightly recused from the probe.

However, it may be premature to celebrate. It's not at all clear that we fully understand the full extent of Whitaker's influence while overseeing the Justice Department. One way in which he could have interfered in the investigation without making many waves is to share information about Mueller's progress and goals with the president himself. Whitaker has claimed he was fully briefed on the investigation.

And now the Justice Department is overseen by newly appointed Attorney General William Barr. Barr himself was appointed to the position after he wrote a suspicious memo criticizing what he imagined to be Mueller's theory of the president's obstruction of justice and circulating it to administration officials. At other times, Whitaker has portrayed himself as a fair-minded lawyer who will take a judicious approach to overseeing the investigation, and some seem to believe him — but the memo he wrote will continue to cast doubt on his integrity, at least until he takes overt actions regarding the Mueller probe that the public can judge for itself.