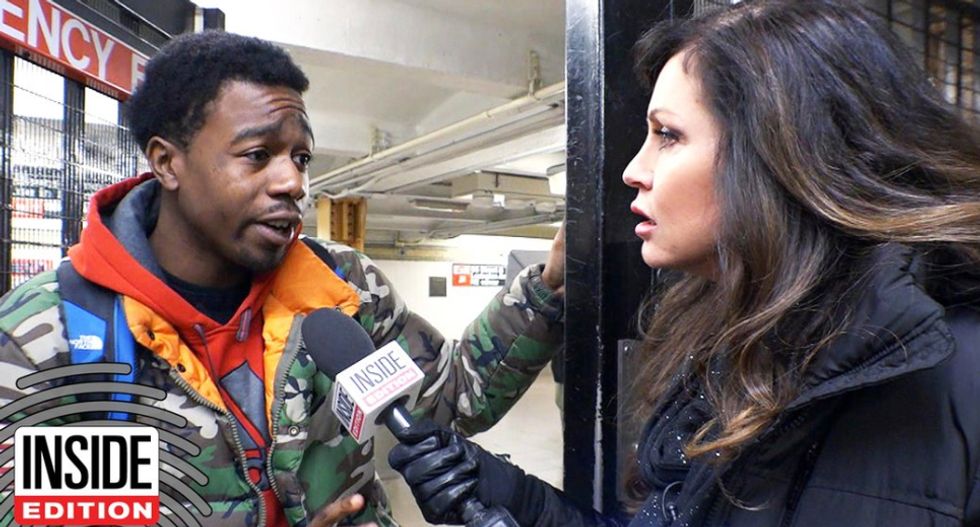 Among the multitude of issues plaguing New York City—homelessness, an ever-increasing cost of living, the dissolution of a program designed to finally assist people whose homes were destroyed six years ago during Hurricane Sandy—few elicit as impassioned a response as the Metropolitan Transportation Authority, or MTA.

So imagine the horror when Inside Edition’s Chief Investigative Correspondent Lisa Guerrero (whose expertise includes "chasing bad guys and drinking wine") discovered that a fraction of the city’s 8.6 million residents occasionally rebuff the MTA’s fare, and opt instead to access the broken and dysfunctional subway system without paying. These fare evaders, Guerrero notes, will hop the turnstile, crawl under the barrier or simply walk through the emergency exit in an effort to avoid paying the $2.75 required for a one-way trip in the subway (plus that $1“new card fee” if a rider doesn’t already have a metro card).

Lucky for New York City cops, who no-doubt lack the resources to catch these hardened criminals themselves, Guerrero is on the case. In a 2-and-a half minute exposé published Tuesday on Inside Edition’s Twitter feed, Guerroro confronted—and on at least one occasion, chased—these unrepentant degenerates and demanded they atone for their fare-evading sins.

This is predatory and classist. But, in all seriousness, @InsideEdition, please do a story on me next. The subway… https://t.co/S1erJQQylQ
— kyle alex brett (@kyle alex brett) 1549988930

The video, as Gothamist notes, “includes no mention of actual rates of fare evasion in New York City (4 percent of riders, per the MTA) or elsewhere” and fails to mention “the miserable state of increasingly expensive subway service" or “the fact that 800,000 New Yorkers are living below the federal poverty line.” Instead, it features Guerroro yelling at subway riders about the disatrous impact their refusal to pay has on society at large.

As Danny Pearlstein of the Riders Alliance told Gothamist, “In the past several years, the fare has gone up repeatedly as service has deteriorates. Indisputably, the overwhelming majority of fare-paying New Yorkers are paying more for less.”

Indeed, many New Yorkers were unimpressed by Guerroro’s hard-hitting investigating journalism, taking to Twitter to voice their concerns with her “predatory and classist” report. Read some of the responses, below:

Despite the criticism, Guerrero remains confident her valuable scoop is helping the greater "WORKING CLASS" community. After all, the man needs all the help he can get.