'It's murder': Scott Walker suggests abortion is the same as ‘if you take the baby home and kill the baby at home’ 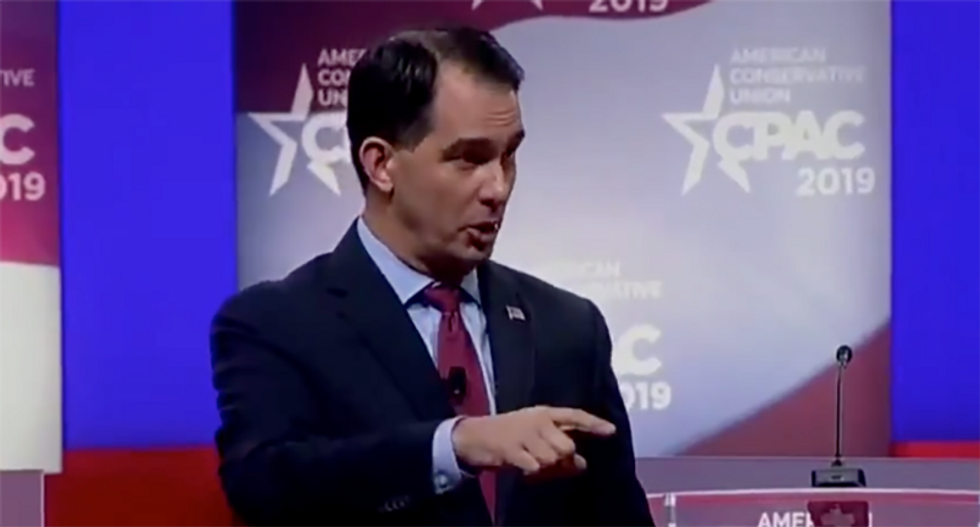 American conservatives have grown falsely convinced that there is a rash of "infanticide" and infanticide-supporting Democrats after bills in several states would allow doctors to decide if an abortion was medically necessary later than is generally currently allowed.

False accusations of "infanticide" have become a rallying cry in recent months for anti-choice Republicans, the religious right, and misogynistic conservative activists working to ban abortion altogether, and it's seeping into all corners of conservative America.

Enter former Wisconsin governor Scott Walker, speaking Thursday at CPAC, the annual Conservative Political Action Conference that attracts extremists from the right. It's hosted and organized by a group run by lobbyist Matt Schlapp, a Fox News pundit who occasionally appears on MSNBC and happens to be married to a senior Trump White House official.

Walker, tapping into the extremist rhetoric and sheer insanity currently engulfing conservative America, appeared to suggest that women are aborting babies at home after giving birth, as Vox's Aaron Rupar noted on Twitter (video below.)

The former Wisconsin governor said "today more than ever" it's important to "stand up for the protection of innocent life."

"By the way," said Walker, interrupting himself, "it's not 'live-birth abortion.' "It's not 'infanticide,' it is murder, if you take the baby home and kill the baby at home, it's murder – the same is true at the hospital."

Walker lost re-election after lying to Wisconsin voters that he would protect people with pre-existing conditions, while actually working to deny them coverage.

Walker neglected to tell CPAC attendees that states are now strengthening their laws, ensuring women have legal and safe access to abortion specifically because the Trump administration and Republicans are doing everything possible –  including installing a huge number of ultra-conservative judges across the nation – to make abortion illegal.