How Trump is making a mockery of ‘humanitarian aid’ in Venezuela 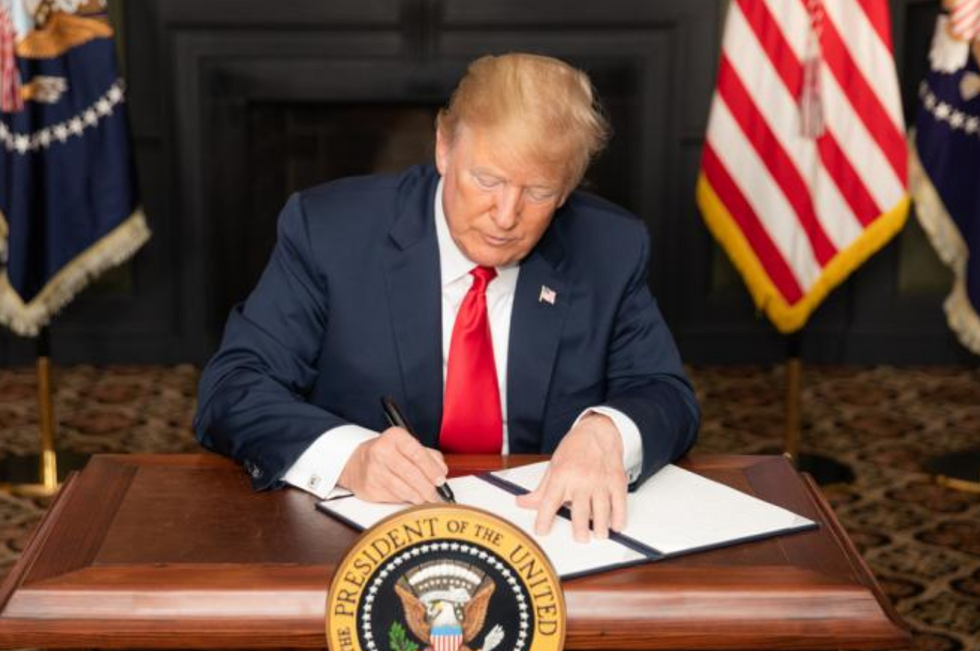 As U.S. planes carrying unspecified “aid” for Venezuela land in Colombia, it is timely to examine the Trump administration’s approach to economic sanctions and humanitarian aid in general, two of the principal tools it employs to achieve the United States’ foreign policy goals.

The Trump approach is quite consistent with previous administrations, starting with a clear separation of words and deeds. Trump told Saudi Arabia in 2017 that the United States would not “seek to impose our way of life on others,” despite largely continuing the interventionist policies of his predecessors. Trump’s cozy relationship with strongman Philippine President Rodrigo Duterte and Egyptian President Abdel Fattah al-Sisi are examples that indicate a willingness to ignore human rights violations in order to cultivate closer bilateral relations with U.S. allies.

This discrepancy—turning a blind eye to human rights violations by allies while criticizing the alleged human rights crimes of their political foes—is also consistent with previous U.S. presidents, from Reagan to Obama.

Interestingly, the so-called “humanitarian aid” to Venezuela takes place as the administration considers canceling many other foreign aid projects around the world.

In August of 2018, the Trump administration announced that it had canceled more than $200 million in aid for the Palestinians in the Gaza Strip and West Bank. At the time of the decision, in a statement issued by U.S. State Department, officials said that the funding would “now address high-priority projects elsewhere.”

In response to the move, Saeb Erekat, secretary-general of the Palestine Liberation Organization (PLO), said the decision amounts to an “admission of the true intentions behind American aid policy of intervening in the internal affairs of other peoples.”

In announcing his candidacy for president, Donald Trump argued that the United States should decrease spending in assisting other nations and instead use the funds to invest in domestic priorities. “It is necessary,” he declared, “that we … stop sending foreign aid to countries that hate us and use that money to rebuild our tunnels, roads, bridges and schools.”

His campaign pledge was largely consistent with his administration’s first budget request, for 2018, which proposed $27.05 billion total for foreign assistance accounts, a 34 percent reduction compared to 2017 levels. Significant reductions were proposed in every aid category, with cuts of more than 40 percent for several aid sectors, including environmental protection, rule of law and human rights, according to a report by the Congressional Research Service.

However, the U.S. Congress largely ignored the administration’s request for 2018, approving $39.92 billion in aid, which represented a 2.2 percent cut from the 2017 funding.

Trump’s sudden shift in thinking about humanitarian assistance represents his selective approach to so-called “humanitarian aid,” which in traditional Washington policy rhetoric has been disguised as an attempt to strengthen democracy and human rights, rather than as an instrument to guarantee Western security, political and economic interests.

These comments, however, should not come as a surprise given USAID’s long history as a vehicle for U.S. intervention. In 2006, under the President George Bush administration, aid aligned more directly with U.S. foreign policy, bringing the agency more firmly under State Department control by having the USAID director report to the secretary of state.

As the United States offers so-called “humanitarian aid” to Venezuela, it does so while imposing harsh sanctions on their economy, further aggravating the country’s socioeconomic conditions.

Washington’s application of punitive sanctions as a security weapon has reached record highs and will continue to increase under the current administration because of the perceived ease of issuance. Since U.S. President Donald Trump assumed office in January 2017, this U.S. government has imposed sanctions on an unprecedented scale.

Through the first seven months of 2018, the Treasury Department’s Office of Foreign Assets Control (OFAC), as well as the departments of State and Commerce, issued at least 873 sanctions under national security directives, according to IHS Global Insight.

In particular, the escalating sanctions targeting Venezuela highlight that it is a key foreign policy priority for the Trump administration.

To supplement the United States’ long-standing commitment in punishing countries like Cuba, Iran, and Sudan, OFAC launched new country programs, including Yemen and Libya during the Arab Spring in 2012, and Venezuela in 2014.

In August of 2017, President Trump intensified existing sanctions targeting Venezuela through the issuance of an executive order that bars U.S. persons from engaging in most transactions involving new debt owed by the Venezuelan government, as well as certain bonds issued by the Venezuela.

During 2018, the Trump administration continued to strengthen sanctions targeting Venezuela through the issuance of additional executive orders. That same year, National Security Adviser John Bolton referred to Venezuela along with Cuba and Nicaragua as the “troika of tyranny.”

In what was a further escalation of sanctions, the U.S. OFAC imposed sanctions on Venezuelan state-owned oil and gas company Petróleos de Venezuela, S.A. (PDVSA), adding the company to its list of Specially Designated Nationals (SDN) and Blocked Persons. As a result, U.S. persons are prohibited from dealing with either PDVSA or entities majority-owned by PDVSA.

In order to mitigate the negative impacts of the sanctions on U.S. corporations with business in Venezuela, the OFAC issued a series of stipulations that provide U.S. firms an extended period of time to conclude their preexisting dealings with PDVSA.

The most recent round of sanctions will inflict a devastating blow to the country’s economy, since Venezuela’s main source of revenue is the oil sector, representing 25 percent of GDP, 50 percent of fiscal revenues, and 97 percent of foreign exchange. It will take immense public outrage from across the globe to stop the United States from ensuring shortages of the most basic goods.