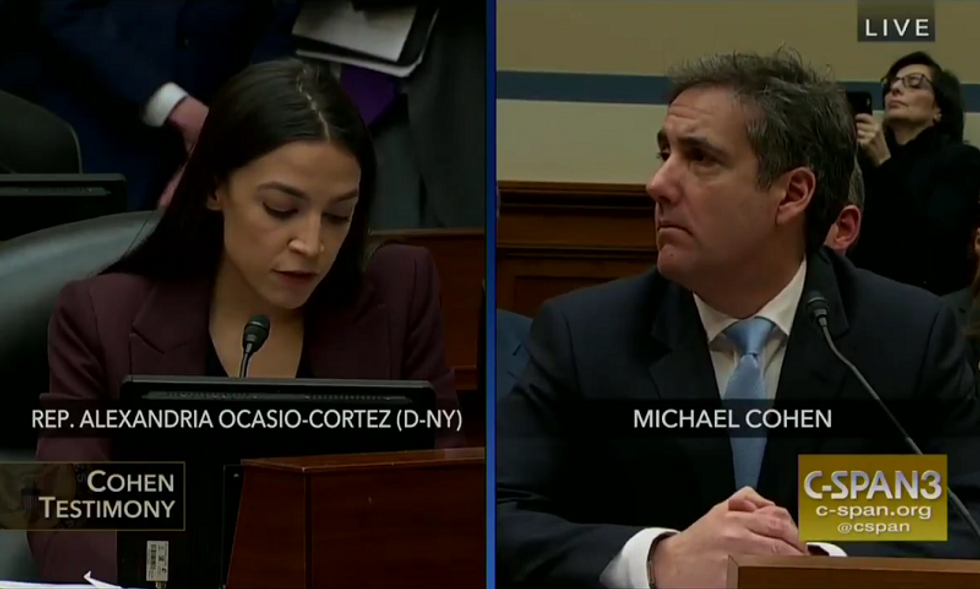 Freshman Rep. Alexandria Ocasio-Cortez (D-NY) has only been on the House Oversight Committee for a few weeks. But in Wednesday's hearing, as President Donald Trump's former attorney Michael Cohen detailed alleged criminal behavior by his former boss, Ocasio-Cortez was in her element. She asked a series of questions that established cause for the House to expand their investigation of the president in several ways.

She first grilled Cohen about David Pecker, the CEO of American Media, Inc. and a longtime friend of Trump's.

"You mentioned a 'treasure trove' of documents in [American Media, Inc. David Pecker's office, relating to information assembled from all these 'catch and kill' operations, against people who potentially had damaging information on the president," said Ocasio-Cortez. "You also mentioned that the president was very concerned about the whereabouts of these documents and who possessed them. Does that treasure trove of documents still exist?"

"I don't know," said Cohen. "I had asked David Pecker for them."

"So you would say the person who knows the whereabouts of these documents would be David Pecker?"

"Thank you," said Ocasio-Cortez. "Secondly, I want to ask you about your conversation with my colleague from Missouri about asset inflation. To your knowledge, did the president ever provide inflated assets to an insurance company?"

"Who else knows that the president did this?"

"And where would the committee find more information on this?" Ocasio-Cortez pressed him. "Do you think we need to review his financial statements and his tax returns in order to compare them?"

.@AOC uses her questioning time to ask follow-ups highlighting some figures in Trumpworld who could help answer questions raised by Cohen's testimony -- David Pecker and Allen Weisselberg among them pic.twitter.com/EPucIdcbPD

With those questions, Ocasio-Cortez set up the Oversight Committee to question multiple allies of Trump, including Pecker and several Trump Organization officials. She also got Cohen to admit the need for the committee to pursue Trump's business holdings and his tax returns.

Cohen's testimony was highly illuminating. But as Ocasio-Cortez's questions revealed, House Democrats have a lot more to investigate.