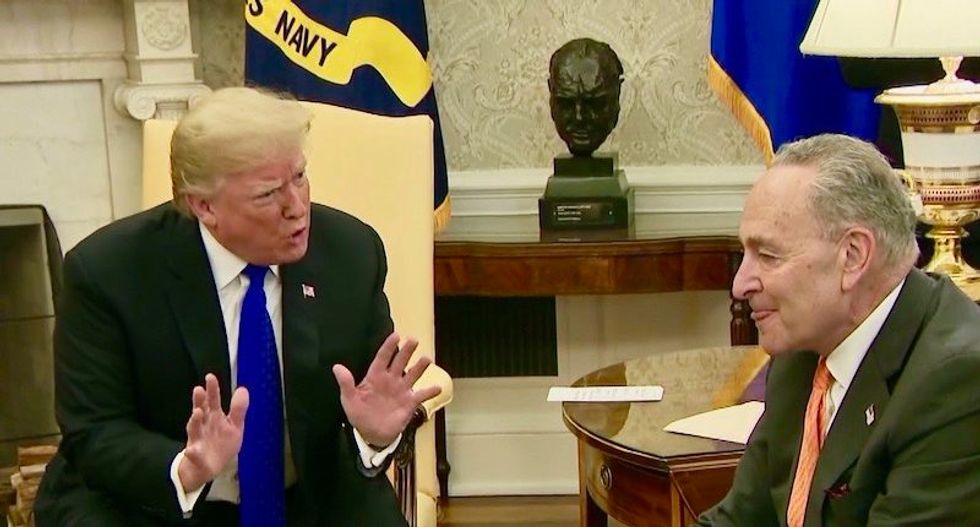 One of the strangest and most ominous moments of President Donald Trump's State of the Union address was when, in an apparent warning shot at the newly divided Congress, the president implied that lawmakers would have to choose between investigating him and passing legislation.

"An economic miracle is taking place in the United States — and the only thing that can stop it are foolish wars, politics, or ridiculous partisan investigations," said Trump.

"If there is going to be peace and legislation, there cannot be war and investigation. It just doesn't work that way!"

"One of the functions of the Congress, the Article I section of government from the days of the founding fathers, was oversight of the executive branch," said Schumer. "And the president says, 'If you investigate me, I'm not gonna make progress.' That's doing what he did with the shutdown, holding the American people hostage."

"You know what I think it shows, John?" said Schumer. "He's scared. He's got something to hide, because if he had nothing to hide, he'd just shrug his shoulders and let these investigations go forward. He's afraid of them."

Trump, his family, his campaign, his businesses, and even his inaugural committee have faced investigations by Congress, special counsel Robert Mueller, prosecutors with the Southern District of New York, and the New York State Attorney General, for everything from conspiracy with Russia, to violating campaign finance and nonprofit laws. The Democratic takeover of the House means even more congressional investigations, and Trump is already plotting how to stonewall them from even obtaining his tax returns.

If Trump plans to obstruct legislation to punish lawmakers for investigating him, it is unlikely to end well for him — his government shutdown, for instance, failed to get him a border wall. If Trump is truly willing to bring Congress to a halt to stop people from looking into his dealings and finances, it is a sign he is desperate — and the public deserves the truth.