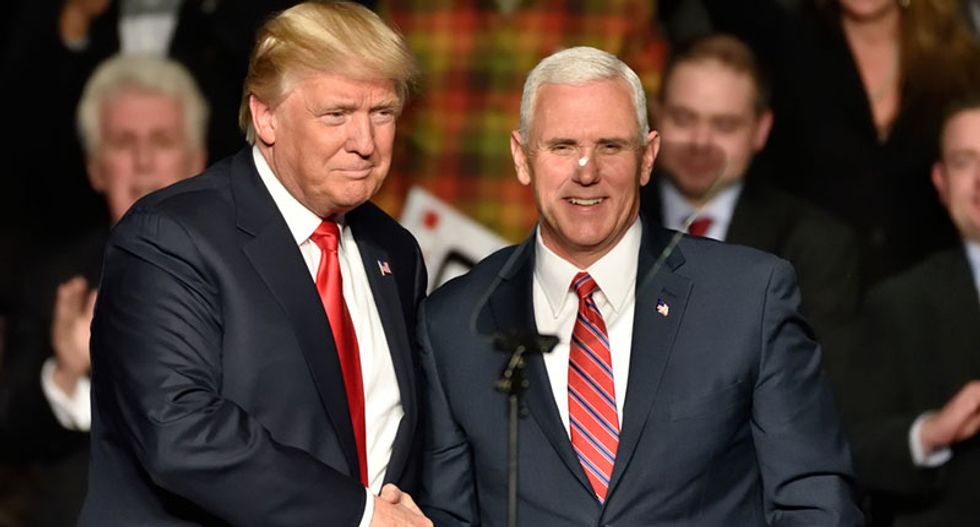 Vice President Mike Pence spends so much time in the Fox News/AM talk radio bubble that when he spoke at the Munich Security Conference in Germany on Saturday, February 16, he seemed taken aback by the icy reaction he received after mentioning President Donald Trump.

Addressing the United States’ European allies in Germany’s third largest city, Pence declared that he was there “on behalf of a champion of freedom and of a strong national defense.” The former Indiana governor went on to say, “I bring greetings from the 45th president of the United States of America, President Donald Trump.” Pence then paused, obviously expecting some applause. But instead, there was dead silence. And when it became obvious that no one would be applauding, Pence resumed his speech.

The lack of applause underscores the fact that Trump is wildly unpopular in Europe. A senior German official anonymously quoted in a February 17 New York Times article asserted, “No one any longer believes that Trump cares about the views or interests of the allies. It’s broken.” And it’s unlikely that U.S./Europe relations will improve in the months ahead.

Here are some reasons why Trump is so unpopular in Europe.

Trump has repeatedly insulted and belittled the North Atlantic Treaty Organization (NATO), insisting that the alliance’s European members are not pulling their weight. In July 2018, Trump said of Germany and other long-time NATO allies of the U.S., “I think these countries have to step it up, not over a 10-year period, but they have to step it up immediately.” And German Chancellor Angela Merkel set Trump straight, stressing, “Germany also does a lot for NATO. We are the second largest donor of troops, we put most of our military abilities into the service of NATO, and we are strongly committed in Afghanistan, where we also defend the interests of the United States of America.”

Trump has stated that “NATO is as bad as NAFTA,” and his disdain for the 70-year-old alliance is obvious. On July 10, 2018, Trump tweeted, “NATO countries must pay MORE, the United States must pay LESS. Very Unfair!”  And a January 14 New York Times article anonymously quoted some senior Trump Administration officials as saying that in 2018, Trump privately expressed his desire to see the U.S. withdraw from NATO.

Addressing climate change is a high priority in Europe, but Trump has made it abundantly clear that he considers climate change a hoax. And in 2017, Trump withdrew the U.S. from the Paris Agreement—which was a major reversal of Barack Obama-era policy on climate change. Explaining that decision, Trump declared, “I was elected to represent the citizens of Pittsburgh, not Paris.” President Obama, of course, never made a distinction between Pittsburgh and Paris when it came to the environment—he realized that Europeans and Americans had a mutual interest in combatting climate change.

3. Trump is friendlier to Vladimir Putin than to NATO

Relations between the U.S. and Russian President Vladimir Putin deteriorated during the Obama years, but Trump has been much more pro-Kremlin than his predecessor. And the fact that he has been friendly to Putin while belittling NATO allies has inspired criticism from both Democrats and Republicans. In 2018, Democrats on the House Foreign Affairs Committee issued a joint statement and urged Trump to cancel a meeting with Putin, saying, “Unfortunately, due to your constant expressions of sympathy for Vladimir Putin, your conflicts of interest, and your attacks on our closest allies, we do not have confidence that you can faithfully negotiate with the Russian leader—and we urge you to cancel the meeting.”

The late Sen. John McCain (R-AZ) was more vehement. After Trump’s meeting with Putin at the Helsinki Summit in July 2018, the Arizona senator complained, “President Trump proved not only unable, but unwilling, to stand up to Putin. He and Putin seemed to be speaking from the same script as the president made a conscious choice to defend a tyrant against the fair questions of a free press, and to grant Putin an uncontested platform to spew propaganda and lies to the world.”

During the Summer of 2018, Trump not only undermined NATO—he tried to undermine the European Union as well, threatening steel and aluminum tariffs against EU countries. On June 29, 2018, CNN anonymously quoted a senior European official as saying, “There is a Trump’s hell where NATO is as bad as NAFTA and EU worse than China. The transatlantic relationship, which all around the table we consider a given, is not a given…. We now have a major crisis.”

CNN quoted another European official as alleging that Trump offered to give France a more favorable trade agreement if it would leave the EU. And in May 2018, Donald Tusk, president of the European Council, criticized Trump’s threat of tariffs against European countries, saying, “Looking at the latest decisions of Trump, someone could even think: with friends like that, who needs enemies?”