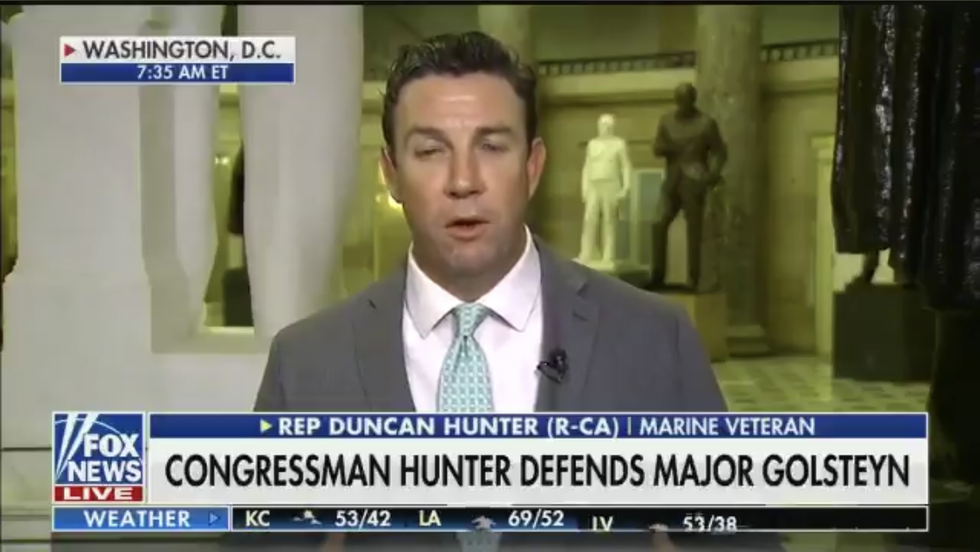 On Wednesday, Rep. Duncan Hunter (R-CA) went on "Fox & Friends" to discuss what he sees as one of the most pressing problems in America today: that troops get punished when they commit war crimes.

"Mat Golsteyn is under suspicion of premeditated murder, Eddie Gallagher is in jail in San Diego, a Navy SEAL that is in trouble for killing bad guys the wrong way," complained Hunter. "What I think we have here is a case of what the U.S. government would call, 'compassionate combat' ... Meaning that they want us to kill guys compassionately, and only under the rules of engagement that they say to. And if you kill the bad guys, that we actually say are bad guys, the wrong way, well, the U.S. government then is going to try you for murder and put you in jail, even if you're a decorated Green Beret, if you're a Navy SEAL, if you're Marine Corps Force Recon."

"There's supposed to be a thing now, 'compassionate combat,' which doesn't exist," he said. "Either you want us to kill the bad guys, or you don't."

Fox guest and Marine veteran Rep. Duncan Hunter complains that the U.S. military is allowed to kill "only under the… https://t.co/Tq8LLQ9oN4
— Bobby Lewis (@Bobby Lewis)1550063262.0

To clarify, the cases Hunter is complaining about are situations in which U.S. troops allegedly went out of their way to kill people who were not an immediate threat to them and didn't need to be killed.

Maj. Mathew Golsteyn is accused of dragging an alleged Taliban bombmaker off a U.S. base after interrogation, shooting him, and conspiring with fellow soldiers to dump the body in a trash pit. Navy SEAL Special Operations Chief Eddie Gallagher is accused of stabbing a detained teenager tied to ISIS and mutilating the corpse, gunning down civilians with a sniper rifle, and threatening fellow SEALs against reporting him.

There are very clear international human rights standards when waging war. Troops cannot deliberately attack civilians, and they cannot murder detainees — even when they are working for "the bad guys." There is no need to do these things in the course of war, and doing so diminishes our moral standing and raises the possibility our enemies could escalate these tactics right back at us.

Hunter, himself a former Marine, was indicted last year for wire fraud, falsifying documents, and theft of campaign finance funds, but managed to win reelection with an exceedingly racist campaign.