Fox & Friends: Jussie Smollett could have caused 'race riots in major cities across this country' 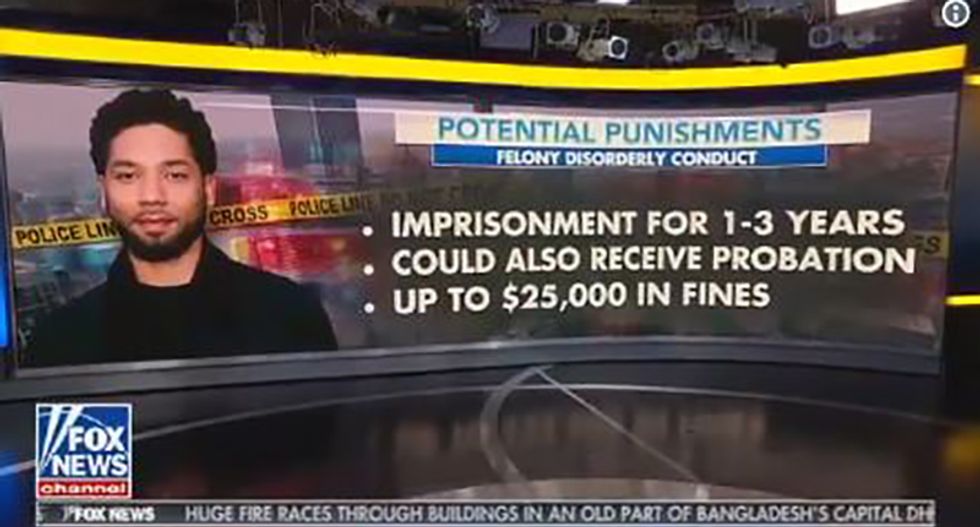 Ever since "Empire" actor Jussie Smollett claimed he was the victim of a racist and homophobic hate crime where his alleged attackers told him, "This is MAGA country," conservatives have been outraged, denying his story.

While it now appears in this instance they may have been right – Smollett surrendered to police Thursday morning and is under arrest for allegedly filing a false police report – the hate and vitriol from the right has been unyielding.

Donald Trump Jr. has tweeted about Smollett 15 times, and used his story to indict Democrats and everyone on the left, including Senator Kamala Harris. There was also this "joke":

The Fox News morning crew on Thursday repeatedly insisted Smollett could have started "race riots in major cities across this country," which is preposterous.

Brian Kilmeade on Jussie Smollett: "Remember the potential, if this had been true, of maybe even race riots in majo… https://t.co/miuQN43yK5
— Bobby Lewis (@Bobby Lewis)1550749447.0

Talking with a right wing Chicago radio host, Kilmeade repeats his "race riot" assertion. Ironically, given Kilmeade's regular fits of derangement, he says, "there's people who are already on the edge when they wake up in the morning – all they need is something to set them off."

Brian Kilmeade again says that the Jussie Smollett story "easily could have been a race riot," and the pro-Trump ra… https://t.co/W2iMqspvcx
— Bobby Lewis (@Bobby Lewis)1550751211.0

"Fox & Friends" co-host Ainsley Earhardt was only too happy to chime in and repeat Kilmeade's "riots" assertion:

As Media Matters reporter Bobby Lewis (who also posted these videos) put it, "I guess it's easy to think the Smollett story was seconds away from exploding into nationwide race riots, 1968-style, when you live your life in fear of minorities."