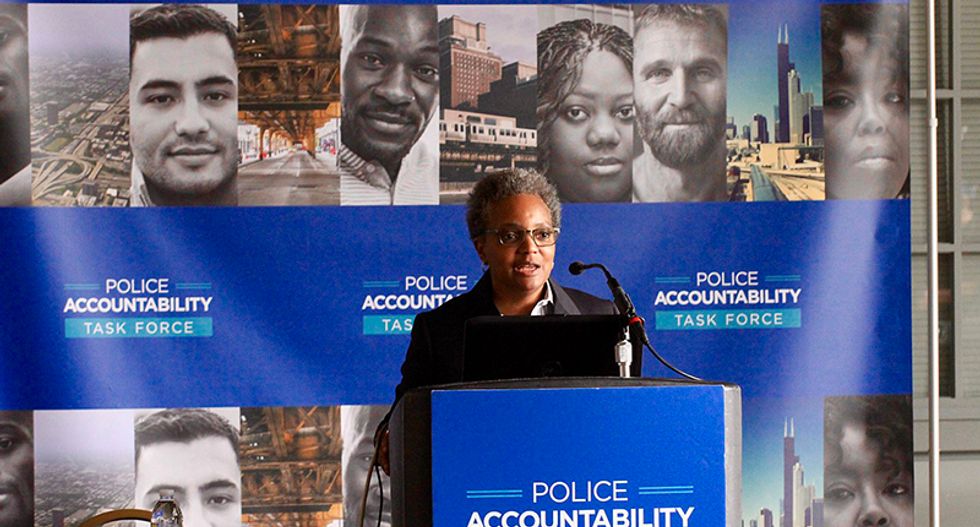 Former Chicago Police Board President Lori Lightfoot and Cook County Board President Toni Preckwinkle, who are both Democrats, secured the two spots on the ballot for the April 2 general election in Tuesday’s nonpartisan primary for mayor of Chicago. Either Lightfoot or Preckwinkle would be the first black woman to serve as mayor of the Windy City, and Chicago will also soon become the largest city in America to ever be led by a woman of color. A Lightfoot victory would make Chicago the largest city in the country to ever be led by a gay mayor.

Lightfoot took first place on Tuesday’s 14-way race with 17 percent of the vote, while Preckwinkle edged former White House chief of staff Bill Daley, the son and brother of Chicago’s two longest-serving mayors, 16-15 to claim the second general election spot. Preckwinkle, who is also the leader of the Cook County Democratic Party, looked like a frontrunner, if not the frontrunner, from the moment she entered the race in September, but Lightfoot’s rise came as much more of a surprise.

Lightfoot, a former federal prosecutor, was one of several candidates who had kicked off a bid to unseat Mayor Rahm Emanuel. However, Emanuel surprised the city in September when he announced that he would retire, and soon a number of prominent politicians, including Preckwinkle, Daley, former Chicago Board of Education president Gery Chico, and state comptroller Susana Mendoza, entered the wide-open race to succeed him. Lightfoot, a first-time candidate, had considerably less name recognition than many of her new opponents, and until this month, not a single publicly released poll showed her taking more than 5 percent of the vote.

However, the race changed in January when Ed Burke, a powerful city alderman who has served since 1969, was indicted for attempted extortion. Burke had connections to Daley, Chico, and Mendoza, but it was Preckwinkle who attracted the most negative attention from all this. Burke's indictment alleged that he had pressured the owner of a Burger King franchise to donate $10,000 to a candidate, and Preckwinkle's campaign quickly acknowledged she was the recipient. Weeks later, the public learned that she had hired Burke’s son for a nearly $100,000-per-year post at a time when the younger Burke was facing two internal investigations by his previous employer.

Preckwinkle was never accused of wrongdoing, and these stories weren’t enough to stop her from advancing to the runoff, but they almost certainly caused her trouble on the campaign trail. Lightfoot, meanwhile, seized on the Burke story and portrayed herself as different from Preckwinkle and the other major candidates. Lightfoot used her first TV ad, which aired less than three weeks before Election Day, to argue that her opponents were “all tied to the same Chicago machine,” while she had “prosecuted corrupt aldermen and held police accountable.”

Lightfoot also picked up endorsements from the Chicago Sun-Times and Rep. Robin Kelly late in the race, which may have helped her stand out in this incredibly crowded field. Lightfoot’s opponents also didn’t devote much time to hitting her, and the most high-profile attack aimed her way may have actually helped her. Scott Cisek, who was Preckwinkle’s campaign manager, went on Facebook days before the election and posted a photo comparing Lightfoot to Nazis at the Nuremberg trials. Preckwinkle quickly fired Cisek and condemned his post, but the damage was done. Cisek’s badly thought-out message gave Lightfoot some publicity in the crucial final days and allowed her to argue that she was a political outsider who was under attack by the establishment she condemned.

Lightfoot and Preckwinkle will now face off in a five-week contest that should be very different from the crowded months-long primary they just went through. Lightfoot is now one of just two candidates rather than 14, and she’ll attract far more attacks and scrutiny than ever before. And while Preckwinkle took some serious hits during the first round, she still has plenty of name recognition and support from powerful groupssuch as the local SEIU and teachers union.

The only poll we’ve seen of the general election so far is a Change Research survey taken days before the primary that gave Lightfoot a 42-25 lead in what was at the time a hypothetical matchup with Preckwinkle. We should see more surveys soon, now that the dust has settled and the voters know who their general election choices are, which will give us a better idea of each candidate’s standing as the second round of the race begins. The one thing we know at this point is that either Lightfoot or Preckwinkle will make history on April 2, but they’ll need to go through another expensive and bruising campaign in order to do it.

P.S. While Ed Burke’s indictment in January created plenty of havoc for his many one-time allies, the alderman’s own 50-year political career has survived the fallout so far. On Tuesday, Burke outpaced his nearest opponent by a 54-30 margin, and because he took a majority of the vote, there will not be a second round in April in Chicago’s 14th Ward.