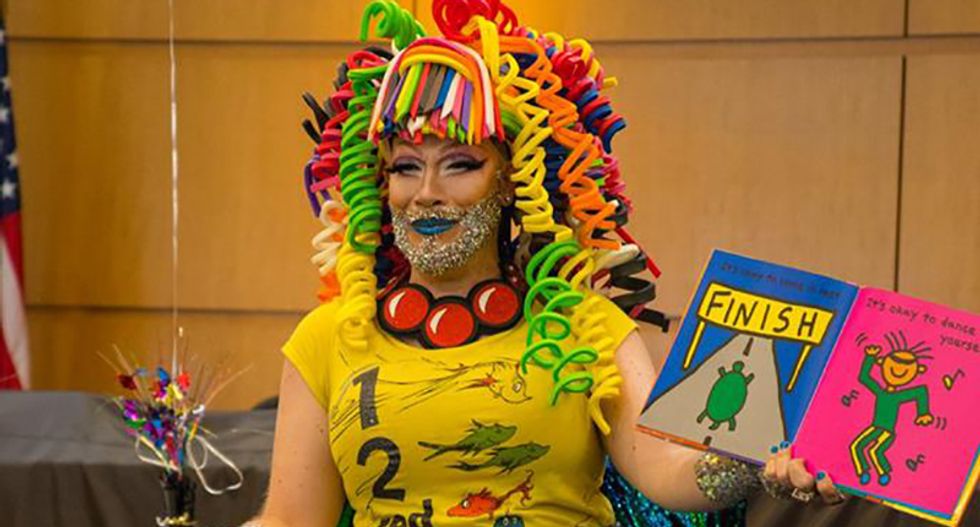 If you’re lucky enough to live in an area where drag queens volunteer their time to read to locals, like children, the elderly, or those in hospitals, you’ve probably already experienced what fun magic and sense of community these “story hours” bring. Unfortunately, not everyone thinks these events are appropriate for kids, which is where protestors decide to insert themselves.

In recent example, about 25 people showed up at the Brentwood Community Center in Brentwood, California to protest a literary event which involved a drag queen reading children’s books to, you guessed it, children.

How many people showed up to attend the event? Oh, a cool 500.

In an interview with the SFGATE, a spokesperson for the group said the reading event was "a rousing success."

"The Contra Costa County Library is proud of the event," spokeswoman Brooke Converse said. "Our mission is about bringing people and ideas together. We want to be representative and inclusive of everyone in our very diverse county and community."

Bella Aldama, the drag queen who read at this particular event, said:

“There is nothing wrong with reading a children's book that displays diversity and different gender identities. We are all different, and everyone deserves respect and love. We are not trying to teach or brainwash anybody. Drag is just a form of gender expression."

Drag Queen Story Hour started out in San Francisco before spreading to neighboring parts of California, including El Cerrito and Concord. It’s actually spread across the country, but not without some depressing reactions from dissenters.

For example, take avid Trump supporter James “Doc” Green Senior. You might remember that he recently went semi-viral for attempting to violate a no trespassing order as he tried to protest a drag queen reading event in Houston, Texas. He posted a video of police removing him from the library to YouTube. Notably, he’d been banned from the library for allegedly recording children without permission at a prior event. Oh, and he was carrying a concealed weapon at the time, which police confiscated.

Why are these sort of events so important? They offer positive exposure and build community, to start. Normalizing different gender expressions from a young age can be hugely beneficial to children as they experiment with and discover their own identities. After all, anyone can do drag; you can identify as queer (or not), a man (or not), and be any race, age, religion, or so on. And in a media culture that often still depicts LGBTQ and gender non-conforming people as evil or dangerous (how many times is the villain in a children’s movie discretely coded as queer?), positive representation in real life can do wonders.