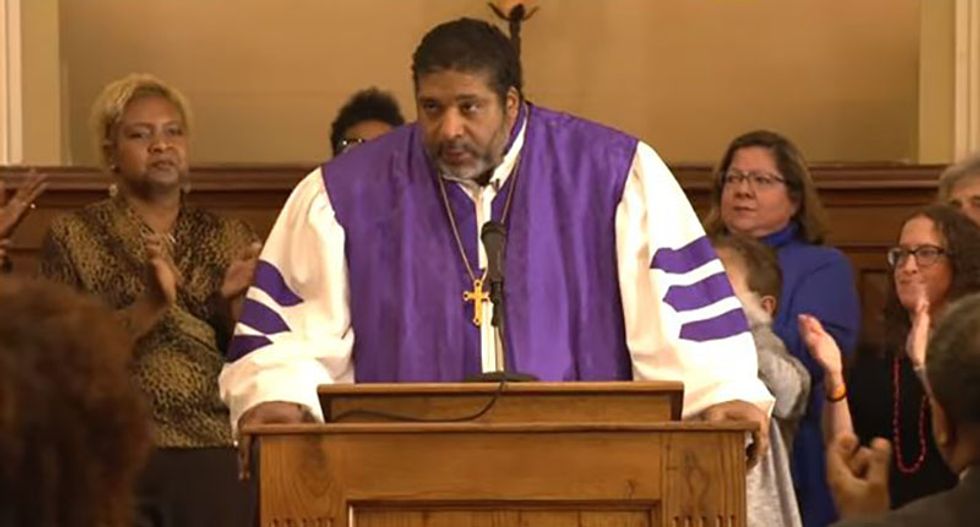 To mark what would be the 90th birthday of civil rights icon Martin Luther King Jr. this year, Rev. Dr. William Barber II—architect of the Moral Monday movement in North Carolina and co-chair of the national Poor People's Campaign—delivered a sermon on Monday about what is means to preach and why, as Dr. King exemplified, good people of all backgrounds and beliefs "must march, organize and fight" against injustice wherever it is found.

"To honor Dr. King, who was always a preacher," Barber stated, "I wrote this sermon for #MLKDay on what it really means to preach."

Commending the powerful preaching of those who stood for social justice and the common good throughout history, Barber's sermon highlights the fact that King stood against "racism, poverty, and war" not because it was popular, but because it was morally unavoidable. "That's why [King] spoke as one who had authority," Barber says.

"And not only did he do it within the comforts of a quarantined sanctuary," he continues, "but he did it in the streets of the nation and even from the jails."

So what is it to preach in these times of struggle?

As the central part of the sermon, and to answer that question, Barber declares:

To preach is to see the people who are crying out and the systems that are crushing them. It is to say, "Somebody's hurting my people and it's gone on far too long and we won't be quiet and inactive anymore." It is to do something about it. It is to join with others who are doing something about it.

When words are changed into deeds of liberation—that's preaching. And anything else is just talking.

When the fruit of the lips become actions dedicated to justice—that's preaching.

When a call goes out that unites people across the lines of race and class and creed and sexuality—now that's preaching.

When the Poor People's Campaign brings Natives and Asians and Black and White and Brown people together, and march together and organize together and go to to jail together for a moral revolution of values—that's preaching.

When preachers go to the border and serve communion to the officers and communion to those who are holding back the immigrants and then tell them while they're eating the communion that they need correction and that they're wrong—that's preaching.

When nuns lobby for healthcare and when preachers say, "I'm not gonna preach another funeral over somebody who died from the lack of healthcare and said 'God called him home.'" Instead I'm going to say, "God may welcome them home, but the government killed them." That's preaching.

When churches and synagogues and mosques open their doors and offer sanctuary to families that are being ripped apart by ICE -- that's preaching!

And when that kind of preaching is happening, it is transformative. It changes the world. It might get you killed, but that same preaching will get you back up again. And if it doesn't get you back up, preaching also gets folks pregnant. So you might be dead, but those behind you will come forth. Preaching always produces.