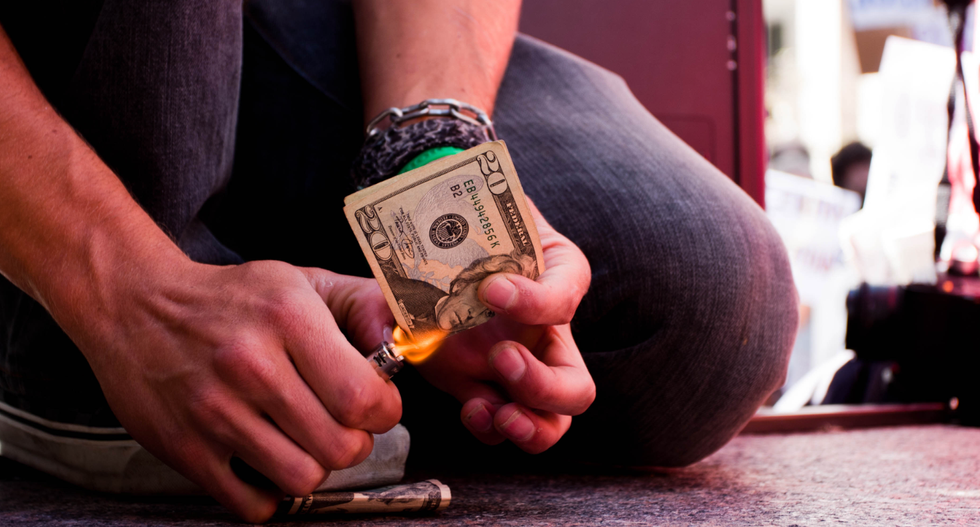 Universal Basic Income (UBI) is a much-touted solution to our increasingly tech-driven society, proposed by everyone from Alexandria Ocasio-Cortez to conservative libertarian think tank the Cato Institute.

The idea is that UBI could replace vanishing jobs and give all Americans a cushion. Give every American a set amount of money per month, often suggested at the $500 or $1,000 level, to spend as they wish.

As leaders from tech to social movements are well aware, we are about to enter the age of self-driving Ubers, increasingly smart supply chain and warehouse technology, and news reports being generated and delivered by AI. It doesn’t matter how many workplaces unionize or how many stomp their feet and demand jobs: a lot of people currently employed won’t be in the foreseeable future.

Richard Branson, Elon Musk, and Mark Zuckerberg have all pointed to UBI as a solution for the fact that tech is taking over entire industries. Besides being a prong in the “Green New Deal,” the city of Stockton, California, is implementing a trial run beginning in February by giving 100 residents $500 a month.

Never mind that in 1972, when the idea of UBI was gaining popularity, the guaranteed amount discussed was $1,000. It seems absurd that, given inflation and massive cost of living increases over the last 45 years, $500 a month is what’s being discussed.

And rarely, if ever, is it pointed out that, in fact, the idea of giving everyone money is so they can spend money. That seems to go without saying, of course, but that point should be made: Our capitalist system requires everyone in this country spend money.

More important is how to enable people to live in a way that is healthy—will UBI do that? The evaporation of traditional jobs requires a reevaluation of our place in society, and how we can contribute to and support our families and communities. Do we want to continue to labor for money to buy things that for thousands of years were acquired without cash or credit?

“The American citizen’s first importance to this country is no longer that of citizen but that of consumer,” wrote the Flint Journal’s editorial board in 1924. “Consumption is the new necessity.”

That point has been driven into us so deeply as a society that we live it intuitively, without thought or articulation.

What UBI would do is facilitate our society’s continued consumption. That’s the point, at its heart, and why the great titans of contemporary wealth are championing it: Hypercapitalism has sucked so much wealth from the bottom rungs that giving them money to spend seems a viable option to keep the economy chugging its fossil fuel-powered engine into an increasingly bleak future.

Capitalism is failing, and the strategy is to give everyone money to spend.

Of course, the great masters of the moneyverse Branson and Zuckerberg can’t come out and say that, but the progressive left and the conservative right have happily taken over the job of selling it to society on their behalf—with very little details, of course.

Some on the right, like Paul Ryan and Marco Rubio, say rolling other social programs into one “flex-fund” or “universal credit” would reduce government spending while giving citizens more control. Bestselling author and libertarian darling Charles Murray has the same idea about UBI. That might sound good until you realize there is no way those who rely on Medicare, SNAP, and Section 8 (or any combination of dozens of other programs) can possibly purchase health insurance, food, and shelter for themselves, let alone their families, with $500 or even $1,000 a month.

Others like Mark Zuckerberg recommend UBI in addition to other social welfare programs, and suggest it would foster creativity and innovation. Native Americans on reservations have been receiving government checks and consistently falling short on their expenses and basic needs for years. With gas at $12 a gallon and a quart of milk at $16, it’s easy to see why.

What Musk and Branson and others across the media landscape are doing, says Harvard economist Jeffrey Miron, is “they’re saying [UBI] because it feels good. They’re just mouthing a slogan.”

What’s missing from all of these suggestions, or slogans, and by their champions from Silicon Valley to Washington to the New Progressive—besides being honest about why people need money to spend to sustain a failing system—is truly universal: A comprehensive plan.

Many, from the right through to the Green New Deal, are strikingly vague about what they are proposing with UBI, says Miron. The specifics, he says, are needed every time UBI is brought up so people know what is actually being referred to. A roll-all-welfare-into-one UBI is much different from a supplement to other welfare programs, and both are much different from a true universal plan, where everybody gets the money, from Jeff Bezos to the homeless guy who camps under your town’s highway overpass.

The lack of discussion of UBI details is eerily similar to the first part of Sinclair Lewis’s prescient book, “It Can’t Happen Here”—the 1935 tale of America’s rapid decline into fascism. Protagonist Berzelius Windrip, initially a Trump-like presidential candidate, promises every American $5,000 a year. After taking power, many of his supporters are moved to work camps, wondering when the $5,000 a year they were promised would come. Others simply end up dead.

Hillary Clinton came close to talking UBI up on the campaign trail back in 2016, but like many other smart people, did the math and discovered she and her team just “couldn’t make the numbers work.”

Figuring out how to pay for UBI for millions of Americans is certainly the big hurdle all advocates of UBI face—despite those who say it’s easy. Has any mass program our government decided to pay for ever been easy?

More amusing is what is really being discussed is how to get money to the poor so they can perhaps spend a little on stuff they don’t really need, rather than considering that, perhaps, the entire system of hypercapitalism for the few imposing it on the rest of us is at a breaking point.

Former President Barack Obama said that the question of universal basic income will be an important discussion over the next decade or two: “We underpay teachers, despite the fact that it’s a really hard job and a really hard thing for a computer to do well,” he told Wired. “So for us to reexamine what we value, what we are collectively willing to pay for… that’s a conversation we need to begin to have.”

David Graeber eloquently demonstrates this need to re-examine our values in his latest book Bullshit Jobs, where he considers how those who should be the most valued members of our society are the least paid, while those who do meaningless or “bullshit” work are often the highest paid with the most prestige. Graeber recommends UBI as a tool that would ease the need for bullshit jobs.

Rarely, if ever, has throwing money at a problem whose core is society’s loss of moral compass brought back that moral compass.

Rather, UBI as a solution to society’s topsy-turvy values in fact would further entrench society in capitalism, as it still requires people to continue to participate in and reinforce an unhealthy, money-driven system.

One could argue, then, that it’s not UBI that is needed, but a whole host of reforms when it comes to the things people need for survival and flourishing in our society, that they are now unable to do on their own because the system they are forced to live in requires they spend money they don’t have.

Worse, “there is no chance,” says Miron, of getting UBI done in a comprehensive, meaningful, and functional way in the U.S. “We’ll never do it right,” he continues. “It will be complicated. It will interact in complicated ways [with other social services], and add to total amount of government expenditure.”

From Miron’s point of view, “all energy should be put on reducing the government expenditure.”

While that’s in line with traditional libertarian thought and not something most Americans would agree with, the value of the statement is that it offers a direction thought leaders and the grassroots activists alike might together consider: The examination of the things we need to survive, from small farming to small business to fishing and hunting, and the environmental consequences of the capitalist systems that make these types of basic human survival instincts unattainable in our modern society. There’s a black market in the U.S. for everything from raw cow’s milk to inhalers—problems UBI is not going to fix.

People who might otherwise be self-sufficient are subject to regulations and fines they are unable to afford, and others are living in such toxic areas they can’t even drink the water or breathe the air. They are unable to sustain themselves in the ways humans have been supporting themselves for thousands of years.

While certainly some current regulations do keep some types of greed in check, a thorough and complete reality check of how our laws and regulations are keeping people trapped in a capitalistic system they cannot survive in without cash or a “job” is not an unreasonable call given the state of our society.

The answer, then, isn’t UBI. It’s allowing people to go back to more traditional ways of life, without punishing them for it or making it so difficult if they are unable to.

Either way, clearly, if you’re poor—or rich—many of these ideas seem ridiculous. But the reality is that tech is making it easy for big business to kill jobs, and how to keep the money wheels spinning is, in fact, a growing concern.

It’s up to us, individually and in our own communities, how we want to proceed. Do we provide everyone with a universal basic income? Do we return to more basic ways of life and rewrite the rules to enable that? Or do we do a combination of both, or something else entirely?

The choice is ours, and it is important to consider as universal basic income becomes the slogan du jour.

Valerie Vande Panne is a writing fellow and chief correspondent at Local Peace Economy, a project of the Independent Media Institute. She is an independent journalist whose work has appeared in the Boston Globe Sunday Magazine, Columbia Journalism Review, the Guardian, Politico, and many other publications.