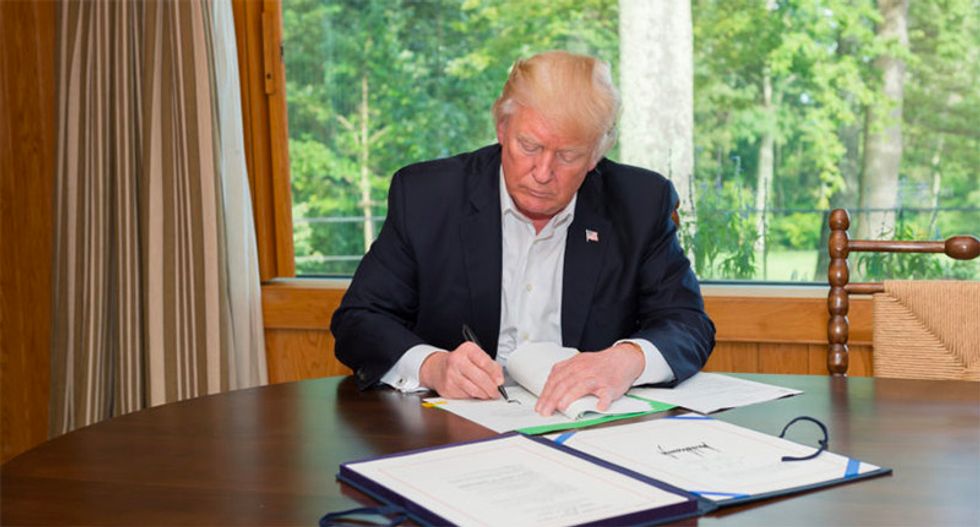 Amid the government shutdown, Donald Trump’s White House is sending a dispatch riddled with typos, the Washington Post reports.

According to the Post, an official email message sent from Trump in response to inquiries and comments from Americans contains a series of embarrassing misspellings; among them, the words “agreemnet” and “immediatly.”

NEW from the White House typos beat: In a new email to the public, Trump is demanding that Congress come to an “agr… https://t.co/lCUvEWA1rT
— David Nakamura (@David Nakamura)1546616989.0

Nicole West, a law student who wrote to Trump about ending the government shutdown, told the Post that while the president’s tweets often include typos, “at a minimum, it seems like [an official email] should be more formal than Twitter.”

“It would have taken under a minute to scan this for typos,” West said. “If this administration can’t be bothered to put together something as simple and generic as an auto-reply message, I can only imagine what other corners are being cut. It’s lazy and it’s embarrassing.”

The email prompted the Post to ask, “have the White House copy editors been furloughed?”

The message in question referenced the ongoing government shutdown, which Trump has threatened to carry on for “months or even years,” Speaker of the House Nancy Pelosi (D-CA) revealed Friday. Trump and Congress—particularly members of the Democratic-led House of Representatives—are at a standstill over funding for the southern border wall, a Trump campaign promise that Pelosi and House Democrats refuse to fund.

Meanwhile, some 800,000 federal employees are furloughed as the shutdown drags on.

The shutdown message is far from the first time Trump’s White House has sent a missive that includes blatant misspellings. In addition to his tweets, an executive order in 2018 misspelled “separation,” an email misstated the date of former First Lady Barbara Bush’s death and a White House livestream in 2017 misspelled the word “opioid.”

The New York Daily News has a running list of misspellings from Trump’s White House, including a tweet where he inaccurately referred to his wife, First Lady Melania Trump, as “Melanie.”