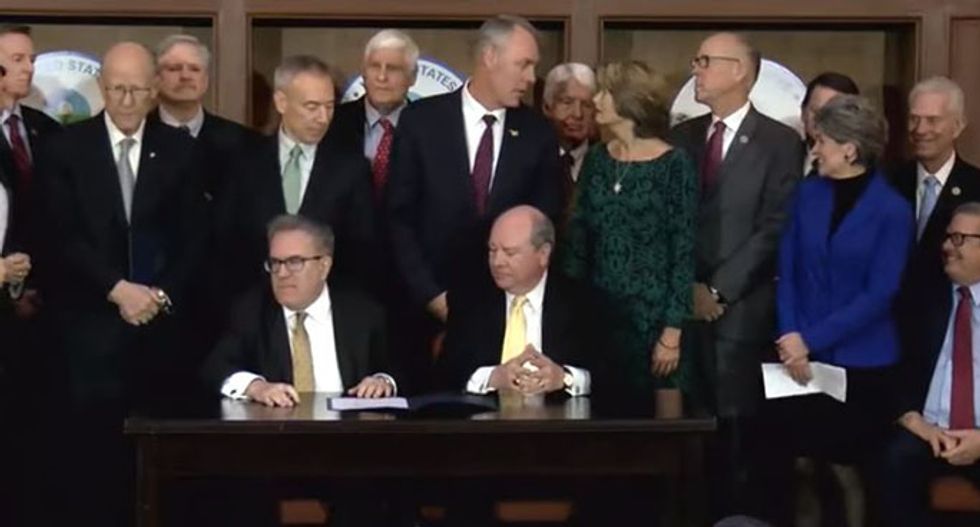 Trump’s Environmental Protection Agency has proposed cuts in water pollution regulation that would increase the 5,772-square-mile dead zone in the Gulf of Mexico, the area where fish and other living things must swim away or die.

Andrew Wheeler, Trump’s nominee to lead the EPA, wants to remove thousands of streams, swamps and other bodies of water from regulations approved under former President Barack Obama to curb water pollution.

Scientists think a 45% reduction in nitrate and phosphorus, much of it from fertilizer, running into the Mississippi River is needed to shrink the dead zone, which was the size of Delaware last summer. In 2008, a task force set a goal of reaching that target by 2015 which didn’t happen.

A rule published in 2015 under Obama could have restricted pollution from chemical fertilizers and pesticides.

“For the water in the rivers and lakes in our communities that flow to our drinking water to be clean, the streams and wetlands that feed them need to be clean too,” then-EPA Administrator Gina McCarthy said in 2015.

Court challenges have meant that the rule is in effect in only 22 states, the District of Columbia and U.S. territories. One of Trump’s first actions in office was to tell the EPA chief to repeal or revise the Clean Water Rule.

What You Can Do About It

Tell members of the Senate Environment and Public Works Committee what you think about Andrew Wheeler’s nomination to head the EPA.

An estimated 18% of streams and slightly more than half of the wetlands would not have federal protection under the proposed changes. The revised rule would exclude streams that don’t run year-round and wetlands that aren’t directly connected to larger bodies of water.

“This sickening gift to polluters will result in more dangerous toxic pollution dumped into waterways across a vast stretch of America,” said Brett Hartl, government affairs director at the Center for Biological Diversity.

The Midwest has some of the nation’s highest levels of nitrates in groundwater because of fertilizers on farms. Nitrates in drinking water have been linked to blue baby syndrome, a life-threatening condition reducing the blood’s ability to carry oxygen.

The Mississippi River watershed drains about 40% of the continental United States. The average size of the dead zone in the Gulf of Mexico for the past five summers is 5,772 square miles, but it was smaller in 2018 at about 2,720 square miles.

Environmentalists want the EPA to set limits for pollutants in the Mississippi River watershed as the agency did on the East Coast with the Chesapeake Bay. The Mississippi River Collaborative sued the EPA in 2012 to try to force action. A federal judge ruled in 2016 that the EPA could continue to help states run voluntary programs and didn’t need to impose mandatory restrictions.

Only one state, Minnesota, of a dozen central states with waters that flow into the Mississippi, has required farmers to reduce fertilizer runoff.

In 2018, water from the dead zone flowed east, contributing to toxic algae in Florida that killed fish and shut down beaches from the Alabama-Florida border to the Florida Keys.