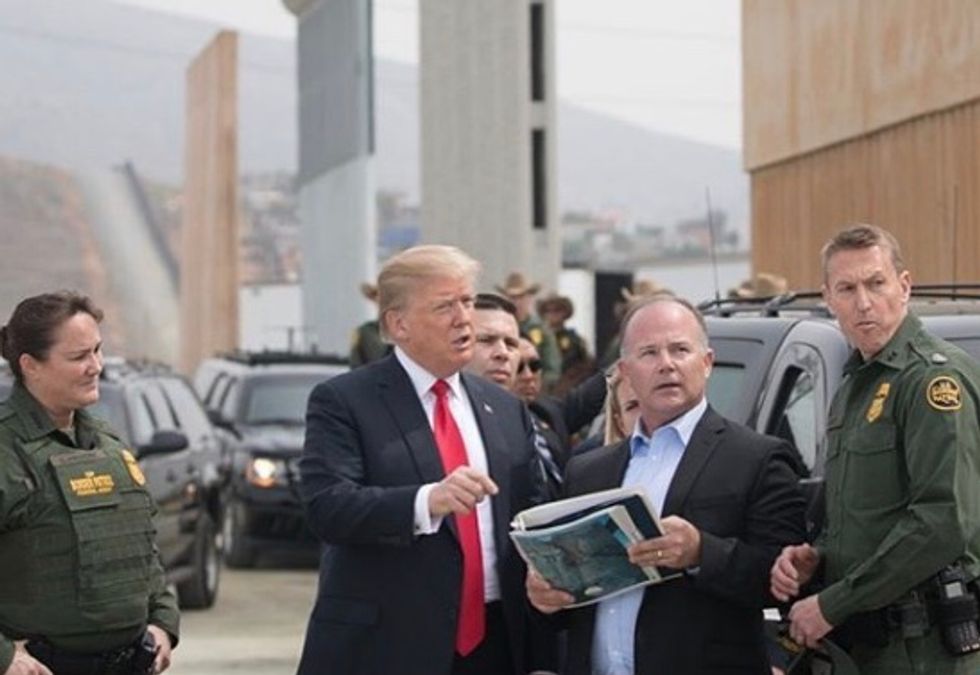 Numerous experts have expressed fear that the wall would have devastating effects on birds, jaguars, fish, butterflies and potentially thousands of additional species.

Now a new research project reveals that dozens of beautiful native bee species, most of which are rarely seen in the United States, could also be hurt or wiped out by the border wall. Bees perform crucial work as pollinators of plants that feed birds and other animals. If their numbers are reduced or species are lost altogether, it could cause a cascade of harmful environmental impacts.

The bees, identified by nature photographers Paula Sharp and Ross Eatmanalong with a team of scientists, were found at the National Butterfly Center, a nonprofit that works to conserve and study wild butterflies in Mission, Texas. The Trump administration plans to build the border wall through more than half of the privately held 100-acre property.

With an uncertain construction date looming, Sharp and Eatman made their first trips to the National Butterfly Center in September and November 2018. Almost instantly they started encountering bees that few other photographers or scientists had ever seen.

They have now documented the bees that they found on a new website, Wild Bees of Texas, which went online this week.

“A large proportion of the species we’ve documented so far are rarely seen within the United States, or they are found in this country only in southern Texas or along the Rio Grande border,” says Sharp. “One species we stumbled on in September had never been documented before within the U.S.” That particular bee, a red-legged leafcutter, might even end up being a species new to science, although examinations are not yet final.

Another incredible species documented by Sharp and Eatman is the Aztec cuckoo leafcutter bee (Coelioxys  azteca), which has previously been seen north of the Mexican border only a handful of times. Sharp says it “looks a little like a miniature lobster.”

Other notable species include the dwarf Epeolus bee (Epeolus pusillus), “which has lavender eyes,” and the Aztec sweat bee (Augochlora azteca), “which resembles a flying emerald.”

Throughout their time at the Center, Sharp and Eatman did more than just photograph the bees: They also documented the insects’ behavior — information necessary for their conservation.

“Our favorite so far is a chimney bee with a hairy orange face called Melitoma marginella,” Sharp says. “This bee hides in the deep throats of yellow esperanza blossoms during rainstorms. When the blossoms fall during cold snaps, the bees stay inside, riding them like escape pods as the wind carries them off. If you find esperanza flowers on the ground at the National Butterfly Center in November and peel back the petals, you’ll find the chimney bees still inside, their orange faces peering up at you.”

Even people who work at the site were pleasantly surprised by the number of bee species found by Sharp and Eatman. “Working with Paula and Ross was eye-opening, to say the least,” says Marianna Trevino Wright, executive director of the National Butterfly Center. “I will never step on fallen blossoms again now that I understand even these are shelter for bees.”

As with their previous project, Wild Bees of New York, Sharp and Eatman made sure they photographed the Texas bees alive, healthy and in their natural habitats. In the process they created stunning visuals that are much more vibrant than traditional scientific illustrations.

“Native bees are often dazzlingly beautiful,” Sharp says. “They can have eyes that are bright green or red or violet. They can curl their long antennae into elegant spirals, hold their tails high like scorpions, or load up their electrostatically-charged hairs with so much pollen that the bees look as if they’ve been dipped in yellow flour.”

So far the website showcases about 40 native bee species, but Sharp and Eatman hope to expand it to about 100 by the end of the year. Based on previous surveys, they estimate, their photo gallery could eventually contain as many as 250 species.

That’s assuming they have enough time to complete their work, of course, as virtually all of these species would be affected once construction on the border wall begins.

“Many of these bees range no more than a few hundred yards from their nests in a lifetime, and so the National Butterfly Center is the only home they’ve ever known,” says Sharp. She adds that the ecologically pristine facility serves as a safe zone from the pesticides, erosion, invasive species and habitat destruction that plague other nearby areas of the Lower Rio Grande Valley.

All of that would quickly come to an end if construction crews arrive. The wall and relate infrastructure would not only be built on top of key habitat where Sharp and Eatman observed the bees, it would also create barriers too high and too solid for insects to pass through. That would have a cascading effect on the entire region.

“Bees are central to every habitat because they are the pollinators that sustain the plants that feed birds, mammals and other creatures,” Sharp says. “If you destroy the bees, you do irreparable harm to the environment.”

Sharp also offers blunt criticism of the border-wall plan. “To destroy regional treasures like the National Butterfly Center is extravagantly wasteful from an economic perspective,” she says. “Restoring what’s lost as a consequence of the wall — either by shoring up new areas or by attempting to repair environmental damage caused by the wall — will be prohibitively costly, and much of the damage will be irreversible.”

Can the planned construction be stopped at this point? As of this writing, President Trump’s government shutdown continues to place a chokehold on many of federal activities that would protect the environment, but nothing appears to be slowing the administration’s plans for the border.

“As we brace for the bulldozer ahead of the border wall, it’s disheartening to know that so much will be lost,” says Trevino Wright, who’s testifying to Congress about the border wall this week. “Humans are terribly shortsighted and foolish, and probably will not learn many important lessons until it’s too late.”