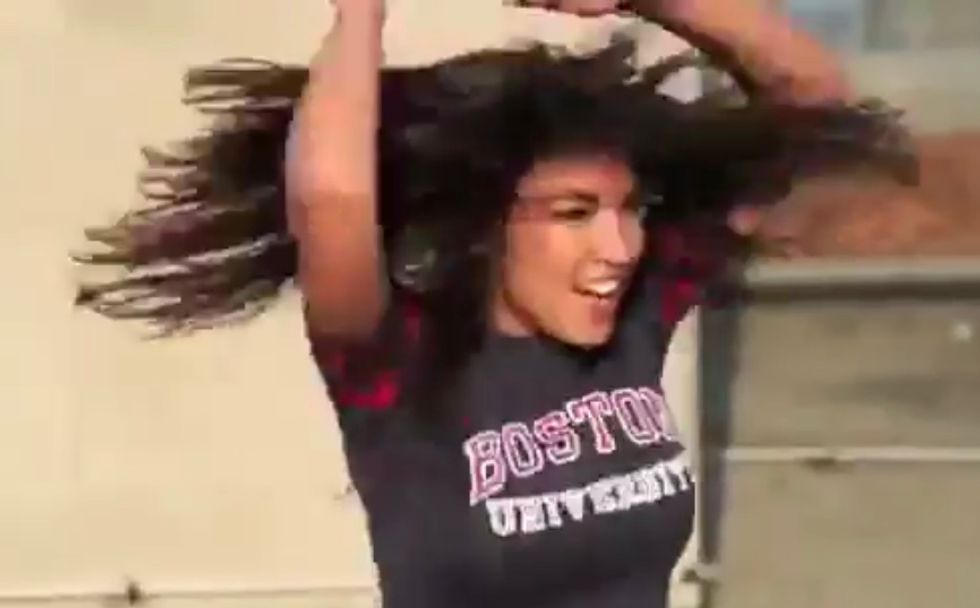 Between her young age, low-income upbringing and mildly socialist platform, Alexandria Ocasio-Cortez has been a target for right-wingers desperate to discredit her very right to be in the halls of Congress.

One right-wing commentator, John Cardillo, posted a picture of her tiny childhood home in Yorktown Heights and tried to attack her for not having a "Bronx hood upbringing." Another, Washington Examiner reporter Eddie Scarry, tweeted a photo of her from behind and tried to analyze her clothes. And today, Gateway Pundit internet troll Jim Hoft posted images of her at a high school with children who were wealthier than her and divulged her school-aged nickname of "Sandy," as if any of that somehow discredited her.

But perhaps the most pathetic attack came from a pro-Trump Twitter user by the name of Dan Jordan, who tried to embarrass her by posting a clip of a young Ocasio-Cortez ... dancing.

Leaving aside the fact that Ocasio-Cortez was actually in college, not high school, when she starred in that "Lisztomania" group dancing scene, nothing about that video is particularly embarrassing.

On the contrary, many Twitter users found it endearing, and mocked Jordan and conservatives who reposted the video for their failed attempt to take Ocasio-Cortez down.

What about this video is remotely harmful to @AOC? She looks like she is having fun dancing to me. https://t.co/YgihLXUSg7
— Renato Mariotti (@Renato Mariotti) 1546543594.0

Meanwhile, some others pointed out the insane double standard Republicans were applying to Ocasio-Cortez's lighthearted dance routine:

Republicans have frequently whiffed while trying to dig up their Democratic opponent's pasts. In 2017, Jon Ossoff's House candidacy in a Georgia special election was boosted when a super PAC linked to former House Speaker Paul Ryan posted a video of him dressed as Han Solo in college. And last year, the Texas Republican Party was roundly mocked for attacking Senate candidate Beto O'Rourke by reminding everyone he was in a punk rock band.

Republicans should wish their candidates had anything as relatable and humanizing as Ocasio-Cortez's dancing video.