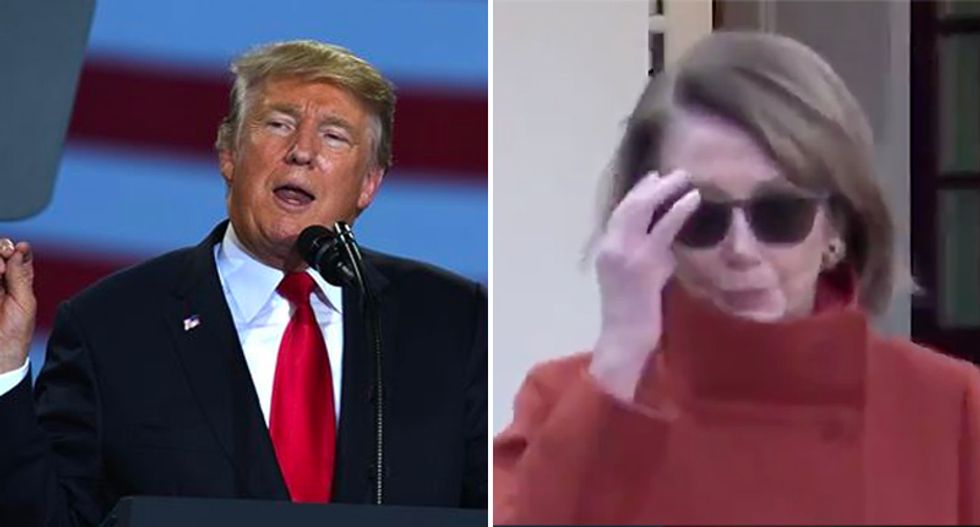 President Donald Trump capped the week-long standoff over the timing and place of his State of the Union address Wednesday night by agreeing to House Speaker Nancy Pelosi's request to delay the annual speech until the government shutdown ends.

The move marks a reversal from his position earlier in the day, when the White House announced it would move ahead with plans for an address — either in the House chamber or at an alternative location — and ends the public tit-for-tat between the two leaders, in which each sought to use the annual event to pressure the other to compromise and end the shutdown. Trump and Pelosi have been embroiled in an intense showdown over the partial government shutdown, which began shortly before the Christmas holiday, over Congress' inability to pass a spending package that includes the $5.7 billion Trump has claimed is necessary to construct a "wall" along the U.S.-Mexico border.

The sparring over the president's annual address comes as Trump and congressional Democrats continue to argue over funds to build a wall along the southern border, with Trump threatening to declare a national emergency to fund the wall if Democrats do not budge. The shutdown, as it currently stands, appears to have no end in sight and has entered its 33rd day, making it the longest budget impasse in U.S. history. Meanwhile, hundreds of thousands of federal workers continue to work without a paycheck.

In a series of tweets shortly before midnight Thursday, the president noted that an alternative venue for his State of the Union would not do and postponing the event was the best option. As Politico noted, "the White House was left with either foregoing a live bipartisan audience in favor of an Oval Office address or further departing from protocol and recent history by delivering the speech from a location outside of Washington. A third option — delivering the speech from the other side of the Capitol, the Republican-controlled Senate — was deemed undesirable."

Trump described his decision to delay the address as the "prerogative" of Pelosi, who officially blocked him from delivering the annual address in the House chamber until the partially closed federal government is re-opened earlier in the day.

"As the Shutdown was going on, Nancy Pelosi asked me to give the State of the Union Address. I agreed. She then changed her mind because of the Shutdown, suggesting a later date. This is her prerogative - I will do the Address when the Shutdown is over," Trump wrote on Twitter.

He added that the White House declined to deliver the address at another location "because there is no venue that can compete with the history, tradition and importance of the House Chamber."

"I look forward to giving a 'great' State of the Union Address in the near future!" he concluded.

Pelosi had sent a letter to Trump earlier this month inviting him to deliver his annual address at the Capitol. However, in the wake of the budget impasse over funds to build a wall along the southern border, Pelosi wrote to Trump again last week urging him to reschedule his address or deliver it in writing, so long as the government remained shut down. She claimed that the partial government shutdown had restricted the abilities of both the U.S. Secret Service and the Department of Homeland Security, potentially harming the "weeks of detailed planning . . . to prepare for the safety of all participants" that precede the primetime address. Additionally, the president is not allowed to address a joint session of Congress unless the House and Senate pass a concurrent resolution.

Earlier on Wednesday, Trump dismissed the Democratic leader's concerns about security resulting from the shutdown. "It would be so very sad for our country if the State of the Union were not delivered on time, on schedule, and very importantly, on location!" he wrote.

"I look forward to seeing you," he added.

In an exchange with reporters outside 1600 Pennsylvania Avenue on Wednesday morning, White House press secretary Sarah Sanders said that officials had "addressed" the safety concerns raised by Pelosi. She did provide any further details.

"The United States Secret Service and the Department of Homeland Security, who would have jurisdiction over whether or not the Capitol is safe for the president to visit, have addressed those concerns," Sanders said. "I think they're the most qualified people, not only to address it, but to make that assessment."