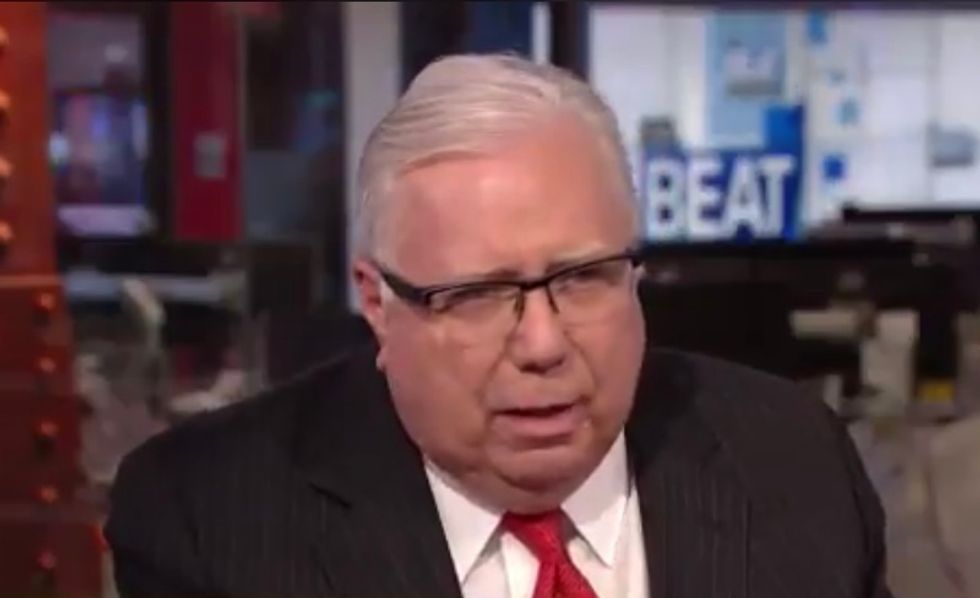 With special counsel Robert Mueller's indictment of President Donald Trump's former campaign adviser Roger Stone on charges of obstruction, false statements, and witness tampering for his role in allegedly facilitating communications between the Trump campaign and WikiLeaks, some of the focus shifts to Jerome Corsi, the Birther conspiracy theorist who worked with Stone and has apparently been under investigation himself.

And although Corsi has been frantically trying to hold off Mueller with a set of ridiculous legal motions, he seems prepared to discuss some of what he knows publicly in the wake of Stone's indictment — which he did on MSNBC Monday with Ari Melber.

"Do you have evidence of observation that suggests Roger Stone sought WikiLeaks' help in timing the release of the emails around the 'Access Hollywood' tape?" asked Melber.

"I can't prove that at all," said Corsi, but added, "I had one call from Roger, as I recall it — Roger disputes this — on the day that WikiLeaks did begin in October, dropping the final emails on John Podesta, and which Roger was essentially saying, we've got this timing issue, because the Billy Bush tape is going to be released, and we'd like to have [WikiLeaks founder Julian] Assange begin releasing emails now."

"He said that to you?" Melber pressed.

"Did you tell the Mueller folks that?"

"Because doesn't that sound like Roger Stone is a confidante of Donald Trump explicitly, not seeking information, which you can make a reporting defense of, but actually trying to collude with WikiLeaks to release things in a way that would explicitly help the campaign and solve one problem?" inquired Melber.

The "Access Hollywood" tape, which featured Trump boasting in lewd detail about how he could sexually assault women with no consequences, had the potential to do massive damage to the campaign. Less than an hour after the tape leaked in October 2016, WikiLeaks began dumping emails Russia stole from Hillary Clinton campaign chair John Podesta, which, while they contained no actual new scandals, muddied the waters of the overall reporting climate in Trump's favor.

While Corsi cannot definitively prove Stone coordinated these leaks, the conversation that the two of them allegedly shared on the matter is yet more evidence that Stone had intimate inside knowledge of the stolen emails — and was a source for the Trump campaign on the matter.