The 'sympathetic racist' returns to the big screen in 'Green Book' 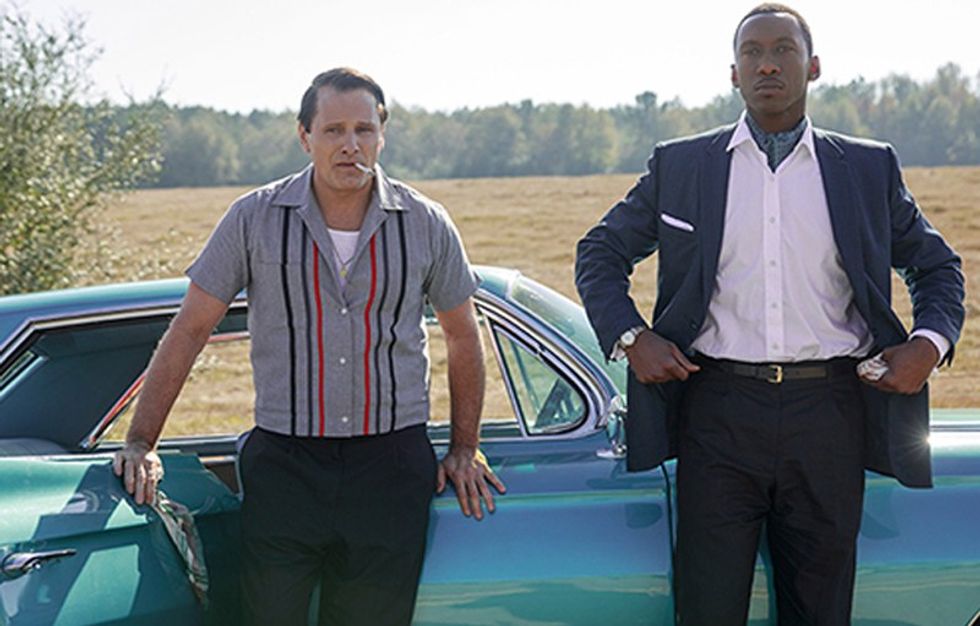 Among the numerous movies dealing with racial issues this awards season, Spike Lee’s “BlacKkKlansman” and “Green Book,” by filmmaker Peter Farrelly, lead the awards competition with six and five nominations respectively, including Oscar nods for best picture. As Lee has frequently pointed out in recent interviews, back in 1990 his inflammatory “Do the Right Thing,” which took a candid look at racial tensions one hot summer day in Brooklyn, N.Y., was snubbed by the Academy for Motion Picture Arts and Sciences. The Academy instead chose to honor “Driving Miss Daisy,” director Bruce Beresford’s adaptation of Alfred Uhry’s Pulitzer Prize Award-winning play about an elderly Southern widow and her black chauffeur.

This year a similar face-off seems to be brewing between “BlacKkKlansman,” based on the memoir by Ron Stallworth about a black undercover cop who infiltrated the Ku Klux Klan, and “Green Book,” based on real-life jazz pianist Don Shirley’s 1962 tour through the deep South with his Bronx-born Italian American driver, Tony “Lip” Vallelonga. The former depicts various types of racists, ranging from bug-eyed Klansmen to well-meaning bureaucrats. The latter centers on an overeducated snob, played by Mahershala Ali, who won a Golden Globe and is nominated for an Oscar, and his lovable lug of a racist driver played by Viggo Mortensen, also nominated.

One thing among many that “Green Book” and “Driving Miss Daisy” have in common is the portrayal of  what might be, and has been, called a “sympathetic racist.” It’s a figure not found in any of the movies made by people of color this year—“The Hate U Give,” “If Beale Street Could Talk,” “Sorry to Bother You”—or any other. Among white directors, on the other hand, it’s common in films that take race as a focus.

The character type has reliably appeared in a series of high-profile films, from Stanley Kramer’s “The Defiant Ones,” in which Tony Curtis plays a sympathetic racist chained to fellow escaped convict Sidney Poitier, to Kramer’s “Guess Who’s Coming to Dinner,” in which Spencer Tracy and Katharine Hepburn have to decide if a kind and handsome doctor who works with the U.N. (again, Poitier) is good enough to marry their unaccomplished daughter. In more recent years, Clint Eastwood directed and starred as a sympathetic racist in “Gran Torino,” about a widowed vet rankled by his Vietnamese neighbors.

“We’re still living in divided times, maybe more so than ever,” Farrelly, who also directed movies like “Dumb and Dumber” and “There’s Something About Mary,” said as he accepted the Golden Globe Award for Best Picture Musical or Comedy, one of three wins that evening. “And that’s who this movie’s for. It’s for everybody. If Don Shirley and Tony Vallelonga can find common ground, we all can.”

Among those who agree are filmmakers Ron Howard, John Singleton and William Friedkin. They joined actors Peter Fonda and Jeff Bridges in endorsing the movie on Twitter. Other supporters include Henry Louis Gates Jr., Harry Belafonte and Willie Brown. Quincy Jones, who knew Shirley, publicly thanked Farrelly at a reception “for telling this story of our country’s not-so-distant history and capturing on film the ties that can bind us when we spend time listening, talking and living with one another.”

Early in pre-production, actor Octavia Spencer was called in by Participant Media’s Jonathan King, with whom she worked on “The Help,” and asked to look at the script. King said they needed a voice from the South, and Spencer, a native of Montgomery, Ala., was happy to oblige. She didn’t recommend any needed changes but became a sounding board for the creative team and was credited as an executive producer.

IndieWire’s Tambay Obenson called “Green Book” another example of what Spike Lee termed the “Magical Negro,” a character with mystical wisdom whose purpose is to transform the white man into a better person. Such examples occur in “The Green Mile,” “The Legend of Bagger Vance,” “The Help” and “Driving Miss Daisy.” The Grapevine’s Monique Judge was troubled by the figure of the white man as savior. Co-writers Nick Vallelonga, the real-life son of Tony, and Farrelly, who collaborated with screenwriter Brian Currie, argue that Tony was hired as a driver and a bodyguard, so obviously there were occasions where he saved Shirley. Other detractors include the Shirley family, who claim the depiction is highly inaccurate, with Shirley’s brother Maurice calling it “a symphony of lies.”

Not helping matters is an old tweet on Nick’s account, since erased, in support of then-candidate Trump’s claim that Muslims were dancing in the streets following 9/11. “100% correct,” Vallelonga reportedly tweeted. “Muslims in Jersey City cheering when towers went down. I saw it, as you did, possibly on local CBS news.” Vallelonga has since apologized in a statement, singling out Ali, “I especially deeply apologize to the brilliant and kind Mahershala Ali, and all members of the Muslim faith, for the hurt I have caused,” he wrote, adding, “I am also sorry to my late father who changed so much from Dr. Shirley’s friendship and I promise this lesson is not lost on me.”

A chameleonic actor known for nuanced performances, Mortensen imbues Tony with a dedication and love for his family, and a loyalty toward Shirley that tests and perhaps overcomes his deep-seated racism. Compare this portrayal with the fanatically comical racists in “BlacKkKlansman,” ranging from the rank and file to David Duke (Topher Grace), an articulate and polished figure of suitably Cro-Mag intellect. Then there’s Chief Bridges (Robert John Burke), at the police station where Stallworth (John David Washington) becomes the first black cop to serve. Bridges welcomes him with open arms, sending a signal to the staff that the rookie is to be treated as an equal. But subsequent assignments and the chief’s attitude toward their investigation into the Klan reveal his underlying racism.

The racists in George Tillman Jr.’s underrated “The Hate U Give” include a bug-eyed cop who shoots an unarmed black man in the back, among others. As the shooting is rehashed on the news and in political debate, systematic racism is laid bare. Even in a love story like “If Beale Street Could Talk,” systemic racism is an inescapable backdrop that profoundly impacts a young couple from Harlem.

“For, you see, he had found his center, his own center, inside him: and it showed,” author James Baldwin writes of his main character, Fonny, in the book on which the movie’s based. “He wasn’t anybody’s nigger. And that’s a crime, in this fucking free country. You’re supposed to be somebody’s nigger. And if you’re nobody’s nigger, you’re a bad nigger: and that’s what the cops decided when Fonny moved downtown.”

While racism is condemned in “Green Book,” “Driving Miss Daisy” and other titles directed by white people, those who practice it often go unpunished. Yes, Tony Lip takes two drinking glasses used by black handymen in his kitchen and throws them in the trash, but that doesn’t mean he’s a bad guy. Sure, kindly old Miss Daisy (Jessica Tandy), accuses her driver, Hoke (Morgan Freeman), of stealing, but still she’s a cute old gal who just doesn’t know better. The same sort of whitewashing can be found in the response of most urban liberals when asked why their parents voted for Trump. They’re not racist, they might explain, or if they are, they don’t have a hateful bone in their body.

“Today we have a cultural norm that insists we hide our racism from people of color and deny it among ourselves, but not that we actually challenge it,” writes sociologist Robin DiAngelo in her book “White Fragility: Why It’s So Hard for White People to Talk About Racism.” “White progressives can be the most difficult for people of color because, to the degree that we think we have arrived, we will put our energy into making sure that others see us as having arrived,” she continues. “White progressives do indeed uphold and perpetrate racism, but our defensiveness and certitude make it virtually impossible to explain to us how we do so.”

Roughly a dozen years ago, journalist Carmen Van Kerckhove at Racialicious identified a trend she called “Hipster Racism,” where white progressives like Sarah Silverman believe they’re post-racial enough to wear blackface, or Amy Schumer, who has joked, “I used to date Hispanics, now I prefer consensual.”

At a “Green Book” post-screening Q&A in Hollywood, Calif., last November, while describing how conditions have changed since the Civil Rights era in which the movie’s set, Mortensen said, “For example, no one says n— anymore.” He has since apologized for using the word in a statement, saying, “[a]lthough my intention was to speak strongly against racism, I have no right to even imagine the hurt that is caused by hearing that word in any context, especially from a white man. I do not use the word in private or in public. I am very sorry that I did use the full word last night and will not utter it again.”

The episode occurred early in the movie’s awards campaign run and might have derailed its hopes, but among critics and awards-governing bodies, “Green Book” appears to be unsinkable. “Is this a perfect time for a movie like this? Yes,” Mortensen asked and answered himself in front of the press backstage at the Golden Globes in January, two months after the flap, as the movie became a resurrected campaign stalwart. “But any time, any generation, when a movie is this well made, this entertaining and also about profound issues, timeless issues, however you want to look at it, it is always going to be a good time to have a film like this.”

After 30 years in the business, for Lee it’s about time he received his first nomination as director. “Today is filled with love,” he told “The Hollywood Reporter” about watching the nominations. “But at the same time, I was watching the news before it came on and I can’t think about the 800,000 Americans who are now living in a desperate time, and I think this film deals directly with that and all the other crazy shit that’s happened in this country since ‘Agent Orange’ [President Donald Trump] got to the White House.”