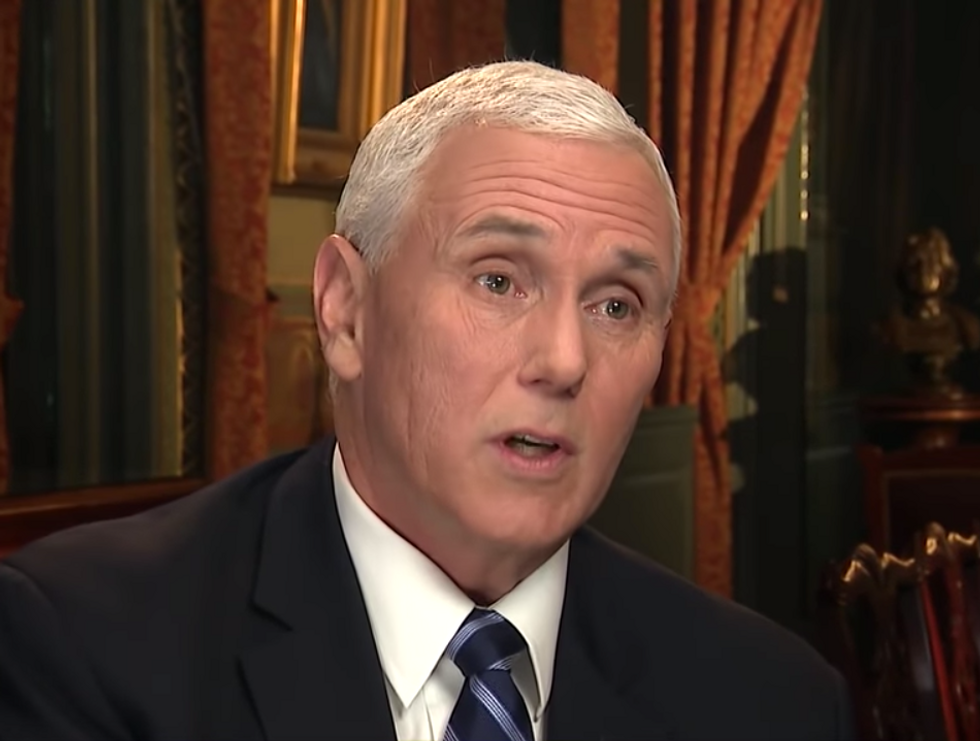 President Donald Trump has orchestrated a government shutdown in order to secure funding for a border wall, and he doesn't care if his tactics hurt the hundreds of thousands of government workers let without a job, the contractors who support the government, the families of these workers, or the people who depend on federal agencies and employees.

And amidst the fights and negotiations about the shutdown, it's also clear that he doesn't care what happens to Vice President Mike Pence.

He doesn't care that, over the course of the fight, Pence is getting humiliated again and again on the sidelines.

It first started when Democratic leaders Nancy Pelosi and Chuck Schumer met with Trump and Pence in the Oval Office in the middle of December 2018. While Trump fulminated at the Democrats' refusal to fund the wall — declaring at one point that he will be "proud" to own the coming shutdown — Pence simply sat there with nothing to say. His flat affect and complete inactivity next to the animated president led to widespread mocking.

Trump initially signaled that he would back a government funding bill without the wall money, sending Pence to tell Republicans in the Senate that he was on board, according to The Atlantic. But Trump later reversed himself in response to a backlash on conservative media, leaving Senate Republicans stunned and Pence looking powerless.

With the government shut down, Pence became a key emissary to the Democrats, and at one point proposed a compromise of only $2.5 billion in wall funding, according to NBC News — down from Trump's original ask of $5 billion.

But Trump pulled the rug out from under Pence, again. Democrats were skeptical about Pence's offer to begin with, not believing that anyone but Trump speaks for Trump, according to NBC.

And right on cue, Trump obliterated Pence's credibility, saying in a Cabinet meeting, “No, not $2.5 billion, no — we’re asking for $5.6 [billion.]”

Even as Pence was holding negotiations with Democrats this past weekend, Trump made clear his vice president's efforts were pointless.

“I don’t expect to have anything happen at that meeting," Trump told reporters Sunday. “Ultimately, it’s going to be solved by the principals.”

And while Trump has undercut Pence at every opportunity, Pence is still playing the role of the dutiful soldier in the public's eye. He's been forced to defend the administration's most mendaciously distortions about immigration. Perhaps most embarrassingly, MSNBC's Hallie Jackson pressed Pence on Trump's blatant and absurd lie that previous presidents had told him that they regretted not building a wall on the border — a claim all the living presidents have denied. Pence wore his usual pained grimace while trying to twist the truth and avoid calling Trump an obvious liar, instead offering the transparently false reply that Trump only said it was "his impression" that other presidents felt this way. This is not what Trump said, and Pence knows it, but he was forced to lie anyway.

This week, Pence's devoted cover for Trump wavered just a bit when he — perhaps inadvertently — admitted on CBS News that Democrats "are not even willing to negotiate until the president reopen the government."

That is, in fact, exactly the Democrats' argument: Trump has taken the federal government hostage, and Democrats don't believe it is right to negotiate under those conditions. Debates about border security can happen while the government is open, just like any other policy debate. Trump has tried to spin the narrative to say that it was the Democrats who shut down the government, not him — but Pence slipped up and revealed the truth.

And on Wednesday, Trump gave Pence yet another demeaning task. After the president threw a tantrum in his White House negotiations with Pelosi and Schumer and walked out of the room, it was Pence who was forced to go out and publicly and say of the Democrats, "We hope they will come back to the table."

Through the fight so far, Pence has proven to be ineffective, inept, and disempowered. His political standing, already permanently stained by his alliance with Trump, is somehow sinking even lower.