'Space Station, this is your President': The bizarre tale of Trump's childlike obsession with getting to Mars 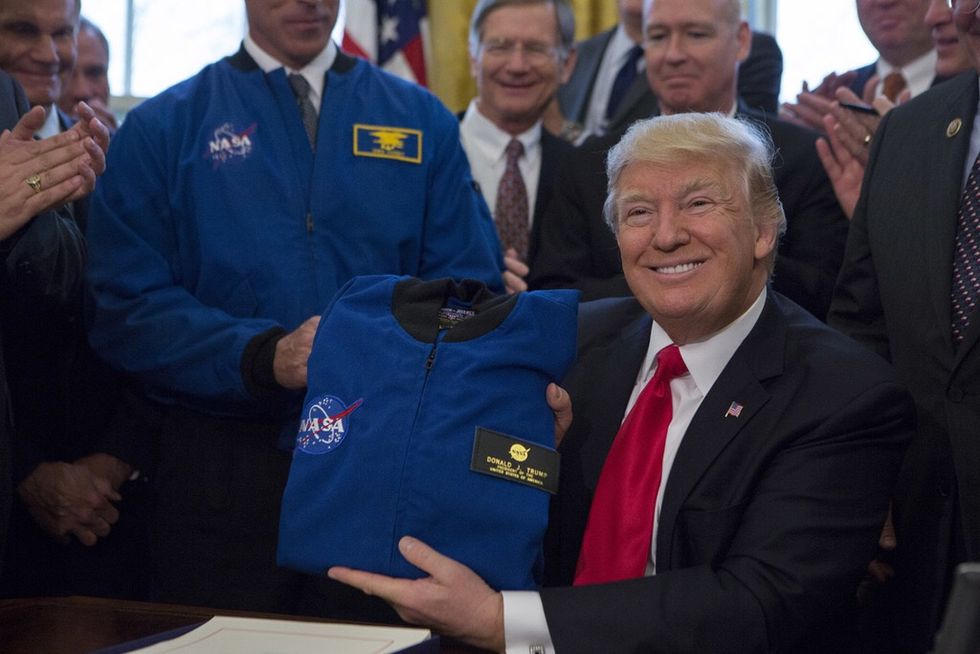 If there is one thing that evidently transports President Donald Trump to a state of wide-eyed, childlike wonderment, it is space travel. But Trump doesn't have any apparent understanding of NASA's goals or technological challenges — he just wants them to be the biggest and best at everything during his presidency, with no clear idea of what that means.

Nothing better demonstrates this than a conversation Trump had with former acting NASA administrator Robert Lightfoot, Jr. in April 2017, as detailed by former White House communications official Cliff Sims in his new book, Team of Vipers, and reported by the Daily Intelligencer.

During a congratulatory videoconference with astronaut Peggy Whitson, who had just broken the record for the longest continual spaceflight by an American, Trump asked, "Tell me, Mars — what do you see a timing for actually sending humans?" Whitson said that, "Well, I think as your bill directed, it would be in the 2030s. Unfortunately, spaceflight takes a lot of time and money, so getting there will take some international cooperation."

While that scene was visible to the public, Trump had apparently been pestering Lightfoot about a Mars mission for several minutes before the cameras started rolling:

"Sims wrote that he leaned in toward Lightfoot and made him an offer. 'But what if I gave you all the money you could ever need to do it?' Trump asked. 'What if we sent NASA's budget through the roof, but focused entirely on that instead of whatever else you're doing now. Could it work then?"

Lightfoot told him he was sorry, but he didn’t think it was possible. This left Trump "visibly disappointed," Sims wrote. "But I tried to refocus him on the task at hand. We were now about 90 seconds from going live."

After officials finally convinced a crestfallen Trump that they couldn't put a man on Mars by 2020 just for him, he distractedly strode over to a bathroom mirror, looked at his reflection, and muttered, "Space Station, this is your President," according to Sims.

Sadly for Trump, NASA is nowhere close to sending astronauts to Mars yet. They still need to work out a number of challenges with the spacecraft, nutrition, health, and transmissions — and they also want to launch the mission at the point when Mars is closest to Earth. That moment will be October 2020, one month before the presidential election, but that is not nearly enough time to solve all these challenges, so NASA will need to wait years for the next time the planets get close enough.

If Trump is serious about a Mars mission, either because he thinks it will be of important scientific value or — more likely — because he just thinks it would be awesome, he should absolutely give NASA the funding to do it and play his part in the advancement of space travel. But his hopes of being able to congratulate the astronauts on the surface of Mars from the Oval Office are just not going to happen.