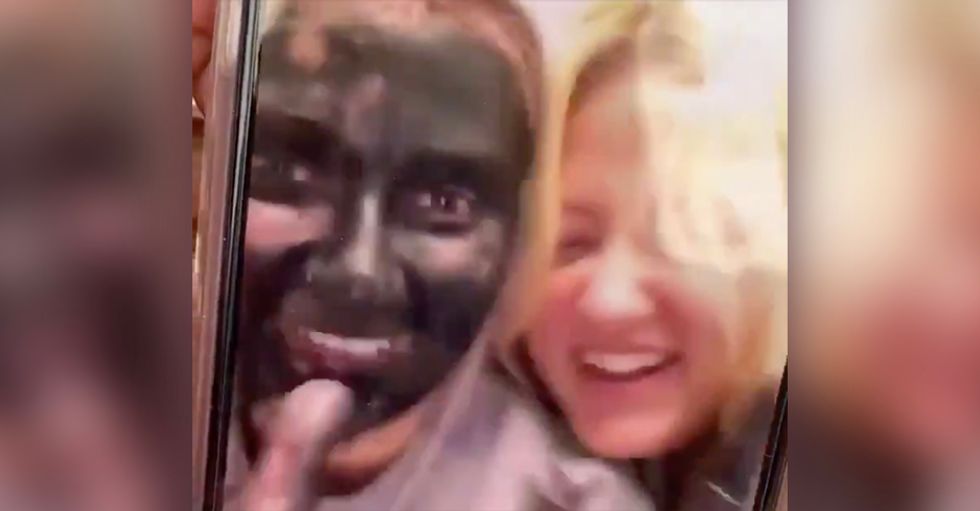 The Tri-Delta sorority at the University of Oklahoma has expelled a student for a snapchat post that included that student using the "N" word to refer to herself wearing "blackface."

The video was posted by a third party on Twitter on Friday, and shows two OU students. In the clip, one of the women comments to the woman painting her face, telling her to, "stop, you have too much! That's paint!"

The one in blackface then raises her hands and says, "I am a..." Followed by a word that could ne the N-world or the somewhat less offensive "negro." The sound quality is unclear, but the inference remains the same.

The student newspaper of the University of Oklahoma has said that the student who filmed the incident was affiliated with the Tri-Delta sorority, while the one appearing in blackface is not.

Tri-Delta released a statement, saying that they were, "founded as a society that shall be kind alike to all, Tri Delta deeply regrets the insensitive and offensive actions of one of our members. We are taking appropriate action."

University of Oklahoma President James Gallogly has condemned the actions of the students in the clip, but has not indicated that the school will move to take further action, including expelling the pair.

"The University of Oklahoma abhors such conduct and condemns the students’ actions and behavior in the strongest terms possible," reads the letter, in part. "While students have the freedom of expression, the negative impact of such conduct cannot be underestimated. The students have offered to apologize in order to reflect their regret."

This is not the first such controversy. OU students faced issues in 2017 with students appearing in an Instagram post wearing blackface to "celebrate" Martin Luther King Jr. Day.  Two students were also expelled in 2015 for taking part in a racist chant caught on video.

The university’s Black Student Union has spoken out, demanding a "zero-tolerance" policy towards hate speech and other changes to support black students on campus.