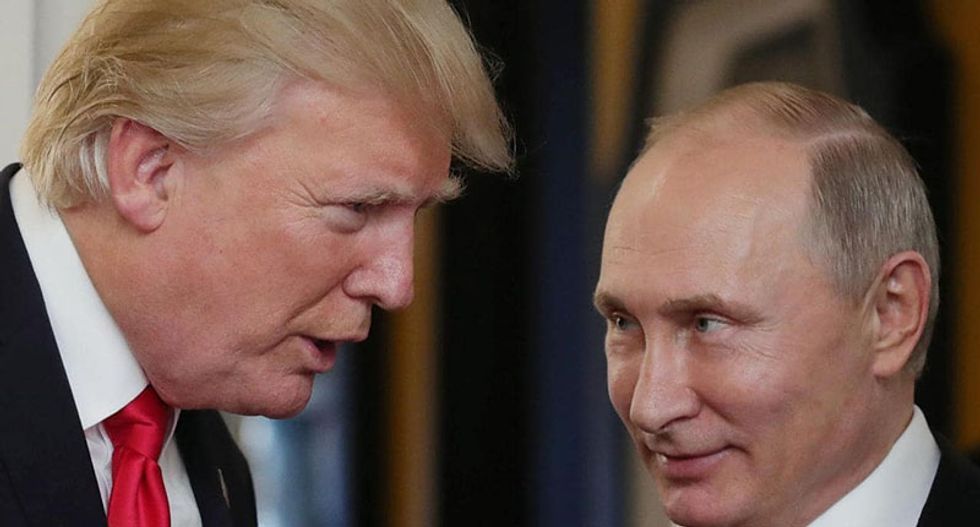 President Donald Trump has fulfilled almost all of Vladimir Putin's dreams and plans to expand the global power of Russia by diminishing the power, respect and influence of the United States.

The New York Times reported this week that during the past year Donald Trump repeatedly and in private expressed the desire to withdraw the United States from the NATO alliance. Beyond an almost heretofore unthinkable betrayal of one of the most successful alliances in modern history -- and one founded by the United States after World War II to counter the influence and power of the former Soviet Union in a war -- such a move could be seen as surrendering Europe to Vladimir Putin and Russia.

This is one more example of Donald Trump's behavior that validates the logic and reasoning behind the counterintelligence investigation opened by the FBI in 2017, in order to determine whether the president of the United States, is actually a Russian asset.

This may all seem unimaginable. However, a nightmare scenario where a foreign country could buy (or otherwise install) an American president to do its bidding was anticipated by the framers of the Constitution.

Is Donald Trump an agent of Russia? What impact is the revelation that Donald Trump may be a foreign asset having on members of the FBI and those others charged with protecting the United States from foreign threats? How was the "emoluments clause" and the Constitution's requirement that the president be a "natural-born citizen intended as a protection against foreign control of the United States government? With the mountains of public evidence that Donald Trump is doing the bidding of Putin, why are both Democrats and Republicans reluctant to remove him from office?

In an effort to answer these questions I recently spoke with Richard Painter. A longtime Republican until his recent decision to quit the party, Painter was White House chief ethics counsel under George W. Bush and is a frequent political commentator and analyst on CNN, MSNBC and other news networks. He is also a professor of corporate law at the University of Minnesota and the author of several books, including "Getting the Government America Deserves."

What was your reaction to last week's announcement that the FBI has been investigating President Donald Trump out of concern that he may be working for Russia and against the United States?

As far as I know this is unprecedented. People knew Trump had strange relationships with the Russians even before he was elected. Consequently, there is every reason to investigate whether Donald Trump is a Russian asset. I don’t know what the FBI has discovered about Donald Trump being a Russian asset. Either way, this is a very worrisome situation.

There is a long pattern of Trump, both as a private citizen and now as president, making choices that advance the interests of Russia and Vladimir Putin and damage the interests of the United States and the American people. If Donald Trump is actually working for Russia in some capacity, this should not come as a total surprise.

What does the public revelation that Donald Trump may actually be a foreign asset do to the morale of the United States military, agents in the Department of Justice, FBI and national law enforcement, the CIA and others tasked with protecting the United States from outside threats and enemy governments?

It really is undermining morale. But Congress will not do anything. The Democrats do not want Pence because he is even more right-wing than Trump on social issues. Second, Pence could actually get re-elected. This creates a dynamic where the worse the evidence is against Trump, the more the Democrats may just want to just stay with him. Impeachment really seems unlikely because of that feedback loop.

On the other hand, the Republicans would be better off going with Pence to keep the president from dragging down the whole GOP ticket in two years. It is rational Republicans who want to pull the plug on the Trump presidency. But there is a whole part of the Republican Party and their voters who are deeply tied to Trump, intensely connected to him emotionally because of all that "Make America Great Again" stuff. No matter how much they might think Pence would be good, the rational Republicans are afraid of the Trump crowd.

Trump has done everything he can to purge his personal enemies from the Department of Justice with the goal of making sure that Mueller's investigation, if not stopped, will most certainly not be made public. What must be done to ensure that the Trump-Russia investigation is finished properly and its findings made known to the American people?

Special counsel Mueller must be kept in place. If that happens, then there is at least a chance that Trump is thoroughly investigated and he will not be able to stop the process.

Now, that being said, it may not be easy to get a lot of evidence of direct communication between Trump and the Russians, given that  when he goes into a room with Putin he does not let anyone else in there at the same time. Trump will offer his own version of events.  But Putin could be wearing a wire and therefore has even more leverage over Donald Trump. This would be a very bad situation, because we do not know what Putin actually knows about Trump and what transpired in those conversations between the two of them.

This all shows that in America right now, particularly in the Republican Party, there are people who are so emotionally worked up about social issues such as immigration that they’re almost blindly loyal to Donald Trump. It seems that no evidence -- if it's of Trump working with the Russians -- could sway them. Trump is also mentally unstable. This situation is very dangerous.

There are reports that a draft version of Mueller's report has just been written and it concludes that Trump was used by Vladimir Putin and Russia to destabilize America.

That makes sense and is plausible. Given Trump's behavior during the campaign, electing him president would certainly destabilize America and the country's democracy.

Now, how much Donald Trump has actively been working with Vladimir Putin to destabilize the country is what must be discovered and made publicly known. Do not overlook that Donald Trump is an inherently unstable person. He’s never been able to have stable businesses or stable marriages. It is then wholly predictable that Donald Trump would be unable to have a stable presidency. It could be that Putin put Trump in the presidency knowing that he is just an unstable person to begin with. But it could be true that Putin has information to leverage and blackmail Trump too.

There are still Americans, and not just Trump cultists, who do not appear to care a great deal about Russia's interference in the 2016 presidential election or whether the president is actually doing the bidding of a hostile foreign power. How would you explain the seriousness of Trump's likely involvement with Russia and Putin to them?

There is a great irony at work with Donald Trump and the Trump-Russia scandal. The founders were very scared that a foreigner could get a bunch of money from Great Britain or France or what have you, come to the United States and then become president. To prevent this the framers put a clause in the Constitution which explicitly states that the president of the United States has to be a "natural-born citizen."

In essence the founders were worried that a foreign mole could be put in the presidency and that foreign money would be used to buy off United States government officials. For 200-plus years the American people have not had to deal with such a scenario -- until the present moment with Donald Trump and Russia.