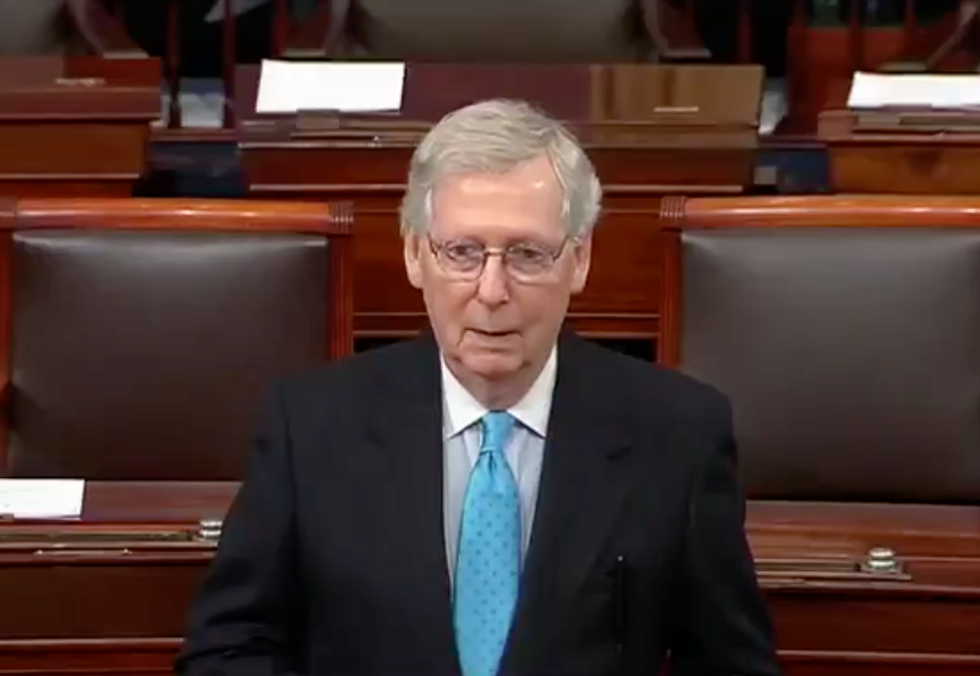 In case anyone was in need of a reminder that President Donald Trump is far from being the sole source of corruption and depravity within the Republican Party, Senate Majority Leader Mitch McConnell is happy to make that point clear as he denounces the Democratic Party efforts to secure voting rights.

McConnell is attacking the Democrats' bill HR 1, which includes the following provisions:

These reforms would reduce the power of billionaires to influence politics, enhance the power of average voters, and make voting more accessible for a wide swath of the public.

So naturally, McConnell is deeply opposed.

"Their bill would make Election Day a new, paid holiday for government workers," McConnell said on the Senate floor this week. "Just what America needs — another paid holiday."

This was a pretty galling statement to make after Trump and the GOP just forced many government employees to come to work while not getting paid at all while forcing others to be furloughed.

McConnell called the bill a "power grab" by Democrats, which would "rewrite the rules to favor the Democrats and their friends." And he decried the fact that the bill would require more federal oversight of states' running of elections.

Because these provisions would increase Democratic turnout, he claimed, the bill is essentially a "Democratic Politician Protection Act."

But while McConnell seems to believe that attacking HR 1, as he's done before, redounds to his advantage and the advantage of his party, what he's actually making clear is how fundamentally unrepresentative and undemocratic the Republican Party has become.

Putting aside his clear disdain for federal workers and workers generally in his denunciation of an Election Day holiday, McConnell clearly fears what the natural result of this provision would be: Many more people would be able to vote.

"An implicit admission that minimizing the number of Americans who vote is a crucial precondition for the GOP's viability as a national party," said Jeff Spross, a correspondent for The Week, of McConnell's claims.

He also admits, in opposing the efforts to bolster the political power of small donations and expose the secret political donations of wealthy dark money donors, that the GOP does better when billionaires have more influence the political system than average voters. This is fundamentally anti-democratic and plutocratic.

And by defending the states' independence in the control of their own elections, he is protecting the duplicity of politicians like Georgia Governor Brian Kemp, a Republican, whose blatant voter suppression efforts in 2018 likely stole the election for him against his opponent Stacey Abrams.

The Democrats' bill is filled with mainstream, reasonable ideas that would make American Democracy much more functional than it currently is. If it passed, it would be much easier to vote. It's true that, if it becomes easier to vote, Democrats will probably do better in elections — because its the Democratic Party's constituencies that are most disempowered and most likely to be targeted for voter suppression. By so fiercely opposing these commonsense measures, McConnell reveals the fundamental truth about the Republican Party as it currently stands: It can only succeed by suppressing the vote.