'Lock him up!' Watch protestors flip the script on Trump as he speaks at New Orleans Convention Center 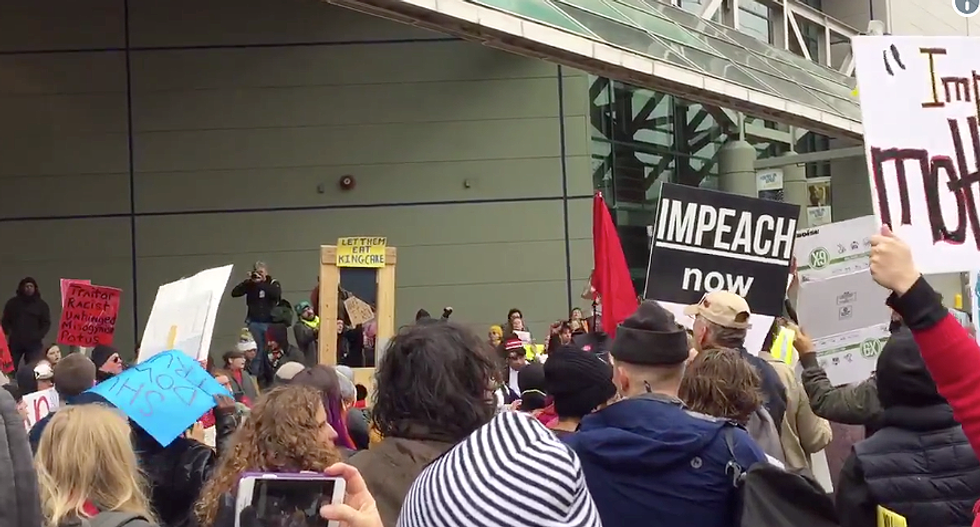 Followers of President Donald Trump are infamous for chanting “lock her up” in reference to Hillary Clinton and other Democratic rivals. But two can play that game, and the president was greeted with chants of “lock him up, lock him up” during a November 14 visit to New Orleans.

Trump attended the Farm Bureau during an event at the New Orleans Convention Center, where he addressed farmers and promoted his trade policies. And outside that venue, protestors carried anti-Trump signs while chanting, “Lock him up.”

Protestors also chanted, “End the shutdown, end the shutdown” in reference to the partial shutdown of the federal government—which has been going on for more than three weeks. Trump has vowed that he will keep the government shut down for “months” or “even years” if Congress doesn’t provide funding for his proposed U.S./Mexico border wall.

The “lock him up” chants come at a time when Special Counsel Robert Mueller’s Russia investigation might be winding down and some of Trump’s associates have either been sentenced to prison or are awaiting sentencing for federal crimes. Michael Cohen—Trump’s former personal attorney—has been sentenced to three years in federal prison, while his former 2016 campaign manager, Paul Manafort, awaits sentencing for a long list of crimes (including bank and tax fraud).

The protestors in New Orleans also chanted, “Trump must go.” And their signs ranged from “keep the immigrants; deport Trump” to “impeach now.”

Protesters have made it to the convention center with chants of “Trump must go.” Note guillotine with “let them e… https://t.co/TyG6XdvxW9
— Jeff Adelson (@Jeff Adelson)1547489521.0