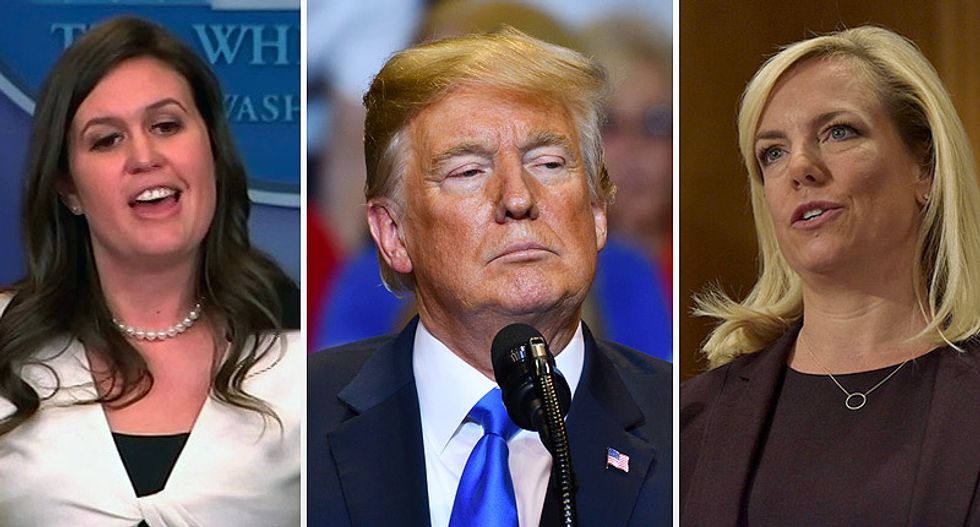 President Donald Trump, Homeland Security Secretary Kirstjen Nielsen, and White House Press Secretary Sarah Huckabee Sanders have been pushing a total lie. Their claim: Over 3000, or, as Huckabee Sanders told Fox News Sunday, "nearly 4000 known or suspected terrorists come into our country illegally and we know that our most vulnerable point of entry is at our southern border.”

The claim that 4000, or nearly 4000 terrorists, or suspected terrorists, were captured at the southern border is a total lie.

The goal: $5.7 billion so Trump can fulfill a campaign promise to build his wall. (The $5.7 billion is only a downpayment.)

And now, thanks to NBC News' Julia Ainsley, we can prove it's a total lie.

"U.S. Customs and Border Protection encountered only six immigrants on the U.S-Mexico border in the first half of fiscal year 2018 whose names were on a federal government list of known or suspected terrorists, according to CBP data as of May 2018 obtained by NBC News," she reports.

When confronted with this fact, that just six people were confronted (NBC doesn't even say arrested, just approached,) Nielsen doubled-down and defended her lie:

The news exploded on social media, causing instant anger and mockery directed towards President Trump and his administration, barely more than 24 hours before he is expected to address the nation on the border "crisis."

(Most networks have yet to decide if they will air his remarks.)

...and what it is really all about. There is no sudden "crisis" at the border. That is why the Trumpers keep lying… https://t.co/lKbRIlwero
— Kurt Eichenwald (@Kurt Eichenwald)1546894148.0