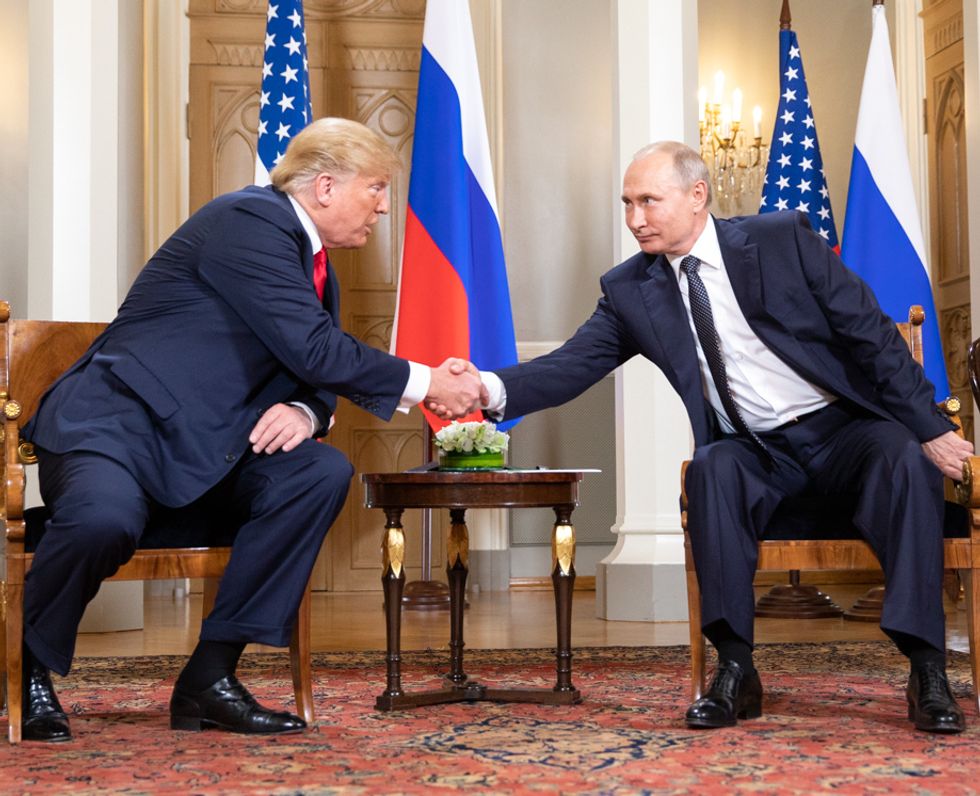 President Donald Trump has gone to unprecedented lengths to keep the details of his meetings with Russian President Vladimir Putin almost entirely secret, a new report in the Washington Post revealed Saturday.

His insistence on keeping top aides in the dark about the details and limiting access to the meetings — an American translator was Trump's only companion during his two-hour session with Putin at the Helsinki summit in July 2018 — has disturbed both current and former officials, according to the report. Presidents typically rely on aides' help in interpreting and reflecting on such meetings, and in light of Trump's bizarre relationship to Puting and the ongoing inquiries into his ties to the Kremlin's influence operation during the 2016 campaign, his actions are perplexing and raise the potential of corruption.

On one occasion in Hamburg, Trump spoke with Putin in July 2017 one-on-one with only a Russian interpreter present, a move that caused many to sound the alarms at the time.

Some critics of the president in Congress have honed in on the translators at these meetings as potential objective sources of information about the secret details. But an effort to obtain the Helsinki translator's notes, after outrage at Trump's public embrace of Putin's denial of responsibility for the 2016 interference, was scuttled by objections that it would undermine the integrity of translation duties.

The interpreters have not been forthcoming, the Post reports, aside from one detail about the meeting in Hamburg, at which Trump was joined by then-Secretary of State Rex Tillerson:

Tillerson refused to say during the news conference whether Trump had rejected Putin’s claim or indicated that he believed the conclusion of U.S. intelligence agencies that Russia had interfered.

Tillerson’s account is at odds with the only detail that other administration officials were able to get from the interpreter, officials said. Though the interpreter refused to discuss the meeting, officials said, he conceded that Putin had denied any Russian involvement in the U.S. election and that Trump responded by saying, “I believe you.”

There are potentially innocent explanations for some of Trump's behavior described in the report. Trump's administration has been particularly prone to leaks, and he reportedly wanted to establish a personal rapport with Putin. But in light of the ongoing Russia investigation, the widespread scrutiny his relationship with Putin has received, and the blockbuster New York Times report published Friday revealing that the FBI opened a counterintelligence investigation to determine whether or not the president was essentially a Kremlin asset, his secrecy will be seen as even more suspicious than it is on its face. The fact that he's been willing to use such dubious measures despite the criticism they were bound to receive makes them even more worrying.