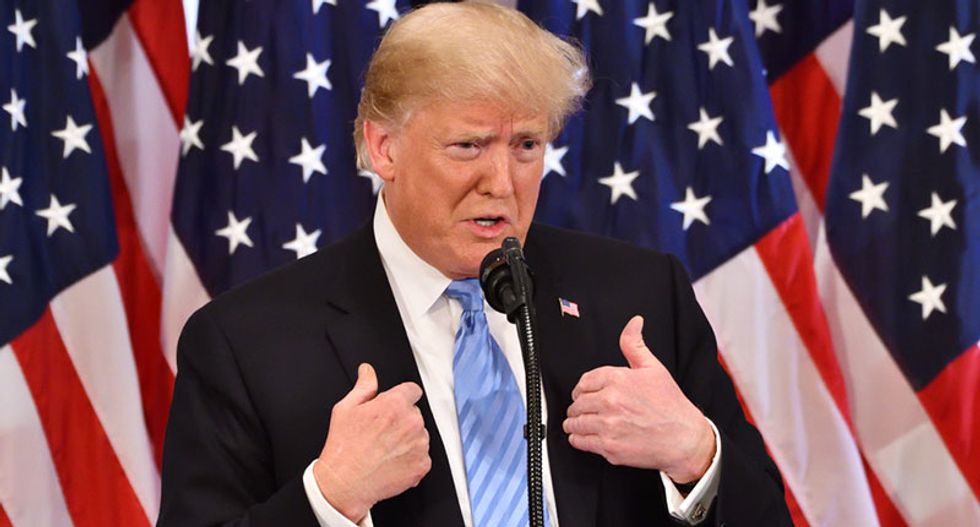 Fox News needs to be careful what it wishes for.

Late last year, the right-leaning news network and friends made a stand and demanded Trump shut down the federal government because he wasn't getting congressional funding for a border wall that he promised Mexico would pay for. Trump gave in to pressure from those right-wing media voices and stunned Republicans in Congress by scuttling the bipartisan spending deal they had in place.

But not only was the shutdown a rolling disaster for the GOP as voters overwhelmingly blamed Republicans for the standstill, but it turns out unpopular, Republican-run government shutdowns aren't good for ratings at Fox News, as Sean Hannity discovered this year.

Coming off a robust 2018 where he logged the top spot on cable news, Hannity averaged 3.3 million viewers last year. So far this year though, he's averaging 2.7 million, which means he lost nearly one-quarter of his audience during the government shutdown. At the same time, Hannity's competition on MSNBC, Rachel Maddow, has been surging in the ratings. She's drawing 3.2 million viewers on a nightly basis in 2019, and has relegated Hannity to permanent second place in the 9 PM time slot.

And on some recent nights the margin of victory has been much larger than 500,000 viewers. For instance, on Jan. 3, 4, and 7 of this year, Maddow defeated Hannity by 1 million viewers each night.

Truth is, the air began going out of Hannity's balloon right after the November midterms last year, when Republicans got shellacked and lost 40 seats in the House. That news cycle was quickly followed by blockbuster headlines on the Russia scandal front (i.e. Trump lawyer Michael Cohen striking a plea deal with prosecutors), followed by the poorly thought-out GOP shutdown, which Fox News virtually demanded Trump make happen.

Combined, the past two months have been a disaster for Trump, whose approval rating has fallen to new lows, and problematic for Fox News, which is forced to make excuses for a sputtering, incoherent administration.

Meanwhile, the onslaught of breaking Russia news over the last two months has also certainly fueled Maddow's rise to the top cable news ratings slot, since her program has become synonymous with in-depth investigations and analysis of the scandal.

The cable news business is cyclical, and we've seen these kinds of ups and downs before.

Note that last fall, Hannity's ratings surged thanks to the controversial Brett Kavanaugh confirmation hearings for the Supreme Court, which allowed Fox News to go on the offense and portray Democrats as mindless attack dogs trying to destroy poor Kavanaugh's reputation (rather than truth-seekers trying to determine if the judge's dark past disqualified him from the highest court).

Hannity was able to use that Kavanaugh-fueled bloodlust among right-wing partisans to gain some ratings momentum, but it didn't last. It's now been more than two months since the GOP's deflating midterms, and nothing Hannity has tried has turned the tide.

From the midterms through the end of last year, Hannity's ratings were down 19 percent, according to the Associated Press. "Among the 25-to-54-year-old demo most coveted by advertisers, he's down 30 percent."

Then in late December, MSNBC made history when it logged in as the No. 1 cable news network for the week of Dec. 21, beating Fox News for the first time in 18 years.

As for 2019,  even Hannity's exclusive sit-down interview with Trump on Jan. 10 was unable to produce monster ratings. That night, Hannity barely squeaked by Maddow in overall audience size. In fact, January 10 has been the only night in 2019 when Hannity beat Maddow in both the prime demographic (viewers 25-54), and all viewers age 12-plus.

On every other night this year, Maddow has come out on top.

On Friday, Trump finally caved to Democrats and agreed to end the government shutdown. Ratings-wise that could mean good news for Fox News, since it would no longer have to play defense on the losing issue, right?

Probably not. Because the same day the shutdown ended, Trump's Russia scandal was thrust back into the headlines with the indictment of his campaign confidante Roger Stone.

And that's a story that plays right into the wheelhouse of Hannity's chief MSNBC competitor.