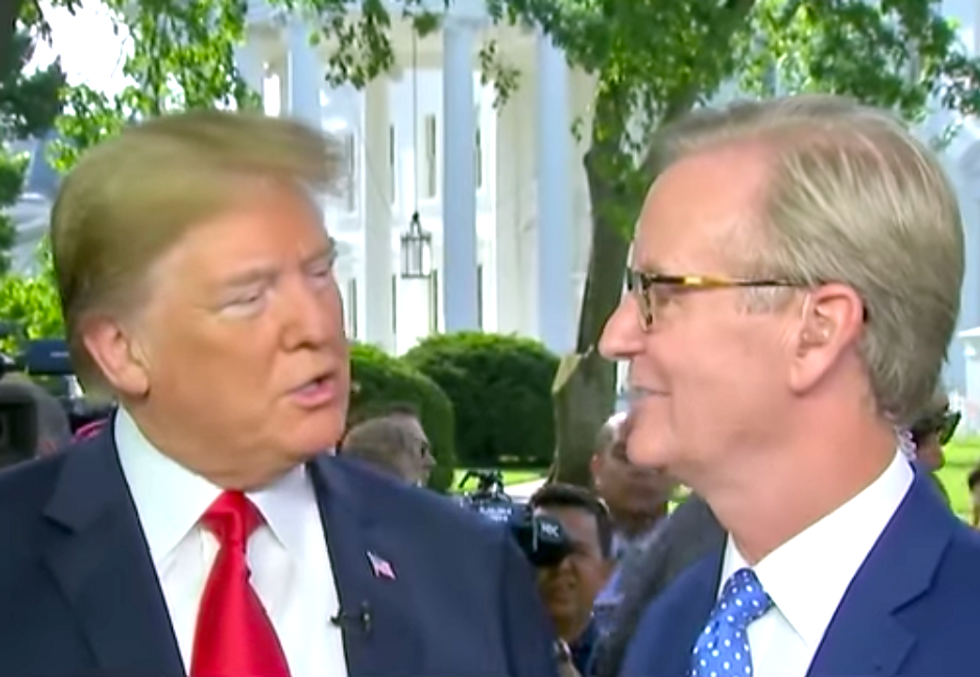 An endgame for the current government shutdown has been apparent for a while now, if not from the first moment that Donald Trump shuttered much of the federal bureaucracy in an effort to blackmail Congress into giving him money for his border wall. Trump gives up the fight and offers some face-saving lie to his base about how the wall is already being built (as he has already claimed), and they pretend to believe him. There's no other way this ends.

Trump is losing this fight. Polls show that Americans blame him for the shutdown and don't really want his wall. He has very little support from the Republican Party, as evidenced by the fact that the shutdown began when Republicans controlled both house of Congress and still refused to give Trump his border wall money. Even immigration hawks, while saying supportive things in public, aren't willing to go to the mat on this issue because they know it won't do anything to slow down immigration by the people they consider undesirable. This is all over for Trump. It's just a matter of when he admits it.

In other words, only one question remains: How long will Fox News draw out this shutdown?

Trump's only real goal in this shutdown fight is to save face. That has been well-established. He's not sincerely worried about breaking a campaign promise, since that's largely what he has done since taking office. He's repeatedly indicated that he'd be satisfied with a solution where he simply tells his followers he won and tweets out a bunch of photos of existing fencing while pretending that he built it. He has no compunction about flatly declaring victoryeven in the face of obvious defeat, because he knows his base voters — the only ones he cares about — will happily go along with any lie he tells, out of loyalty to him and their own unwillingness to admit they were wrong.

But there's a problem, which started well before the shutdown. So far, Fox News simply won't let Trump go down the "pretend you won and move on" route. The network, which Trump watches loyally and regards as a more important adviser than anyone on his actual White House own staff, has stuck to the false and racist claim that the U.S. is being invaded and only a wall will suffice to stop the problem. Fox hosts have also consistently minimized the impact of the government shutdown. And any time Trump gives even a whiff of softening his stance on this issue, the Fox talking heads, knowing that Trump is watching, will turn up the pressure, hinting that they will go after him hard if he backs down.

Fox News has spent the past three years demonstrating a willingness to elevate any silly lie Trump wants to tell. But when it comes to the border wall, for whatever reason, the network has strongly signaled its unwillingness to play along. If Trump tries to pretend he's building a wall when he's  not, Fox is going to call him out on it. As long as that's true, Trump, who cares about nothing quite as much as Fox News saying nice things about him, will be afraid to embrace the obvious strategy of just pretending he built a wall and moving on.

The Democrats passed a bill that would reopen the government that had $1.3 billion in border security funding in it, some of which would go toward fencing. It's the same bill that the Republican-controlled Senate passed in December, but Senate Majority Leader Mitch McConnell won't bother to pass it again until Trump stops threatening to veto it.

If the folks at Fox News wanted to, they could start telling their viewers that this $1.3 billion is for "the wall." Trump would happily join in on the lie, which is nowhere near the biggest whopper either the president or the network has sold to their precious base.

It's a genuine mystery why Fox News has chosen the wall, of all things, as the issue on which they're willing to leverage their considerable hold over Trump. From the get-go, the wall has always been more a symbolic proposal than a literal project. The people most obsessed with "the wall" are also the people least likely to go out to the parts of the border that aren't already fenced in, most of which are incredibly remote and surrounded by forbidding desert. Getting, for instance, to Boquillas Canyon in Texas would require flying into El Paso or Midland, taking a smaller airplane — like a Cessna — to Alpine, and then driving more than two hours through winding, mountainous areas to the border.

That's not, in other words, a trip that the well-manicured hosts of Fox News will likely take in their lifetime. The wall is purely an abstraction to them, and to nearly all the people chanting "build the wall" at Trump rallies. It's a fantasy, meant to symbolize their fear and hatred of Latino immigrants. There is nothing stopping them from taking that fantasy to the next level, simply pretending that a wall is being built and letting Trump move on with his so-called life.

In a sense, that's what Trump and his Fox News masters are already doing. The $5 billion Trump is asking for is laughably inadequate, in the sense that, at best, it's only a quarter of what it would take to build the wall he described so often during the 2016 campaign. The money he's asking for, in other words, is already about creating the illusion of building a wall, with (thankfully) no apparent intention to actually finish such a massive project.

Since the wall is already semi-fake, why not just fake it altogether?

One possible answer is that the shutdown and the wall debate have done a bang-up job at shoving another big story off the front page, which is that the walls continue to close in on Trump when it comes to his massive corruption and likely criminal activity. As Salon's Heather Digby Parton writes, Tuesday was "a blockbuster day in the Russia investigation," and was only overshadowed by all the chatter about the shutdown and the border wall.

If this is the gamble Fox News is making — that keeping the shutdown and the border wall in the news will distract its audience from the Russia scandal — then it's an extremely stupid one. While the Russia scandal is, in fact, a big deal for Trump that could end a presidency of already questionable legitimacy, its one saving grace, from his point of view, is that it's largely an abstract issue for that "base" we keep hearing about. As long as it doesn't impact their lives or their wallets, most Trump supporters were happy to keep churning out ever-changing rationalizations for why they aren't bothered by the Russia scandal.

Government shutdowns, on the other hand, have real impacts on real people — not just "Democrats," as Trump implies. While the administration is scrambling to minimize the impact felt by the kinds of people who voted for Trump — by trying to keep IRS tax refunds coming, for instance — the reality is that there's  no way to have a shutdown without having Americans feel the effects.

As Patricia Mazzei at the New York Times reported this week, for instance, federal prison workers in Florida — an incredibly important Republican-voting demographic in a swing state — are in real trouble because they aren't getting paid during the shutdown. While plenty of them were finding ways to rationalize their beloved president ruining their lives, some were clearly feeling doubts.

"He’s not hurting the people he needs to be hurting," one woman complained. It was a widely reported and disgusting comment, exposing the racism and sadism that motivates entirely too many of Trump's voters. But it also exposed why this particular move runs counter to his political strategy of pandering to his base while ignoring or actively hurting all other Americans.

If Fox News is trying to help Trump out by keeping him invested in this border wall fight, it's backfiring. This foolish gambit is starting to do damage to the voters that he's decided are the only ones that matter, while angering the rest of the country even more. If Fox News really wants to bail out its boy, it's time to give him a break. The right-wing house network needs to let Trump tell a face-saving lie without getting his border wall funding, and finally let him and the country move on to other things.